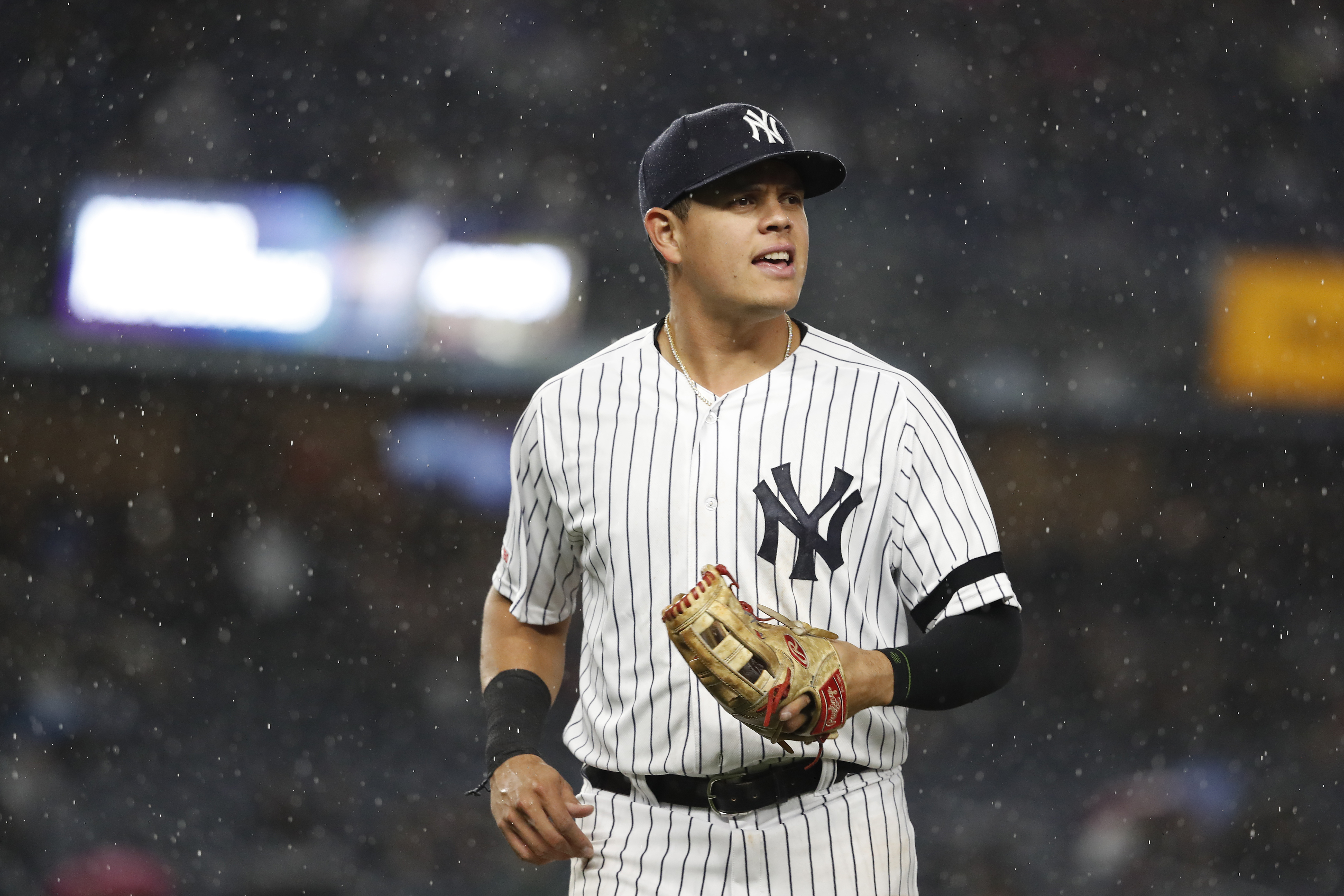 A big part of the Yankees’ success story this season has been their replacements. From Gio Urshella to DJ LeMahieu to Austin Romine and to Mike Tauchman, the Yankees have been able to fill the gaps of their roster. Yes, D.J LeMahieu did not start the season. But the mainstays are making their ways back to the Bronx. While Dellin Betances and Luis Severino have potential to be big-time additions to the Yankees pitching staff, the big hitters returning are going to create a logjam on the Yankees’ roster.

Those big hitters are Luke Voit, Giancarlo Stanton, Aaron Hicks, and Edwin Encarnacion. The problem? Two of those players are outfielders, and two are first basemen. To get a better understanding of the Yankees’ roster today, specifically their starting lineup, let’s look at their opening day starting nine:

Since this lineup was rolled out Andujar had season-ending surgery, Tulowitzki retired, Bird is nowhere to be found and Gio Urshela, Didi Gregorius and D.J Lemahieu made their ways to the Bronx and produced.

Even beyond that, they added Edwin Encarnacion, Stanton has played 9 games all season, Voit has been out since July and Aaron Hicks has not been able to stay healthy. What this all culminates in are tough decisions for the Yankees as they head into October.

First of all, it’s hard to imagine that D.J LeMahieu’s spot at the top of the order is anywhere close to in jeopardy. Can you believe he wasn’t a starter from the beginning? He has slashed .330/.377/.525 with 21 home runs and 86 RBI. He’s the only Yankee in the top 30 in WAR at 4.4, good for 18th best in baseball. So we can basically slot him into the infield the rest of the way. The real question is where?

Who Gets the Bench?

Does Gio Urshela get flexed out of the lineup? Probably, but even that could cause some raucous if Voit or Encarnacion fail to produce upon arrival. In 110 games Urshela is slashing .333/.373/.564 with 18 home runs and 66 RBI. He is third on the team with 3.0 WAR, behind DJ and Gleyber Torres.

But it’s also hard to just keep Hicks on the bench, too. He’s one of the better center fielders in baseball defensively and his services could be much needed. But then why can’t Gardner just move over to left? That’s because Giancarlo Stanton is nearing a return. I know many people will say to just bench Stanton for the rest of the season. But is that really a sound strategy? I’m not so sure.

And then there’s the abundance of depth at the first base position. Luke Voit and Edwin Encarnacion, both on the IL, are going to return prior to season’s end. Both players are having productive seasons. Voit is slashing .278/.392/.493 and Encarnacion is still mashing home runs. But one would think that they should both be in the lineup.

Some of the Variations

So the Yankees are going to have a problem, albeit a good problem to have when everyone is finally healthy. Here are some variations of Yankees lineups when fully healthy. The lineups are in no truly specific order, it’s just more to see who can play where.

One: Without Hicks and Urshela

Two: Without Stanton and Urshela

Three: Without Gardner and Urshela

Four: Without Voit and Gardner

Five: Without Encarnacion and Gardner

There are many variations to be had, but one thing is for sure, the Yankees have a lot of difficult decisions to make. The returns of Stanton, Voit, Hicks, and Encarnacion mean playing time for one of those four as well as one of Urshela or Gardner is going to be reduced at the biggest point of the season. Sure, this is a good problem to have, but I actually don’t know how true that is given the nature of the team and the Yankees fan base and media scrutiny. Especially in regards to Stanton and Voit, if they aren’t producing the Yankees are going to be answering questions all season as to why they put them out there after having potentially better options.

There are 11 players that can be big parts of this postseason run but only nine can be in the lineup at one time. The eleven are:

Tough decisions are ahead for the Yankees.