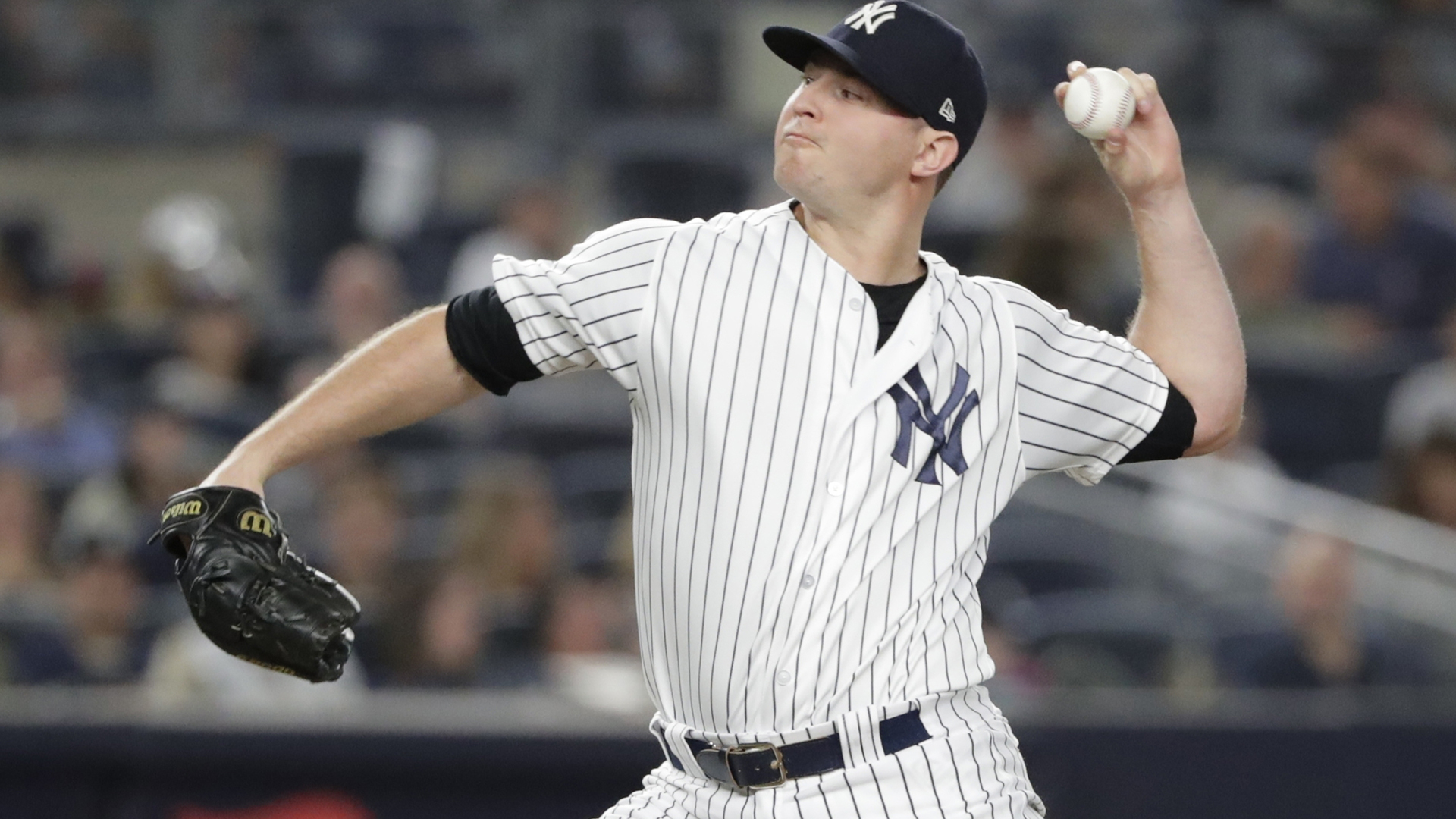 It turns out all that Zack Britton needed was a name change to get things going in the right direction. Well, not really, but since he’s changed his name his pitching success has changed for the better. As of Wednesday Britton sports a 2.22 ERA with an 8.88 K/9, 3.33 B/9, .37 HR/9 and a 14.3% HR/FB ratio. Those are all improved numbers compared to 2018. Why, then, is Britton experiencing a renaissance? One simple explanation is that he is fully recovered from the heel injury that sidelined him for most of 2018. He made just 41 appearances all season. Looking at some numbers, though, tells a clearer story.

Britton has appeared in 24 games in 2019, more than half of his total appearances for 2018. He has also been nothing short of one of the best relievers in baseball to this point of the season. Just look at his Statcast numbers from 2019 in comparison with his dominant 2016 season: 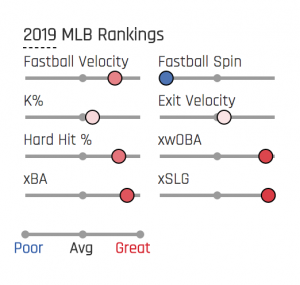 Those numbers are not very far off from each other, and the fact that his expected slugging, batting average against, and wOBA is above the 90th percentile should have the Yankees excited. He is garnering fewer strikeouts, but at the same time producing more soft contact. Everyone knows that Britton basically throws one pitch, his sinker, and the hard hit% on that pitch has dropped to 32.3% in 2019 compared to a career-worst 38.2% in 2018. Batters are also chasing Britton’s sinker more this season. Chase% on his sinker in 2019 sits at 31.2% while in 2018 it was 25.4%.

Location and Getting Ahead

Britton appears to be pounding the strike zone more with his sinker this season than last season. Britton had a lot of trouble with walks last season, but he’s been able to cut down on that significantly, 4.65 BB/9 in 2018 compared to 3.33 in 2019, by locating his sinker better. When you look at Britton’s pitch contours throughout his career, he has lived in the bottom half of the zone. He didn’t favor one side, he just wanted to keep the ball down. In 2019 his focus appears to have shifted to the 9th quadrant of the zone, which is down and in to left-handed hitters and down and away to right-handed hitters. Here’s where his sinkers have lived in 2019: 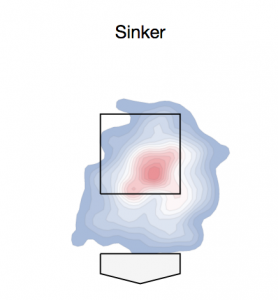 Compare that to 2018, where he was a bit more sporadic: 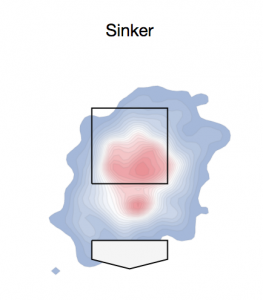 Aside from the improved location, a major change from last season to this season has been his first pitch strike %. In 2018 he sat at 49.7% and in 2019 he has improved up to 59.8%. That, of course, comes with the improved location that I have spoken about. But all of his improvements also appear to be part of a change in strategy in attacking hitters across the past two seasons. But historically, Britton’s first pitch strike % has sat at 56%, closer to his 2019 number. This, then, leads me to think that his injury last season was really bothering him. Thus, there are many factors in play here: strategy, location, health, and getting a more horizontal break on his sinker.

Britton is also getting a lot more horizontal break on his sinker, which is conducive to his apparent plan to live in the 9th quadrant. Here is an example of what I am talking about. Not only is that pitch sinking vertically, but it has a significant amount of horizontal break to it as well. So not only is his nasty sinker continuing to move vertically, he has found the ability to make it move from right to left effectively. In fact, the average horizontal break of his sinker is the highest it has been since 2014, according to Statcast.

What This All Means

His sinker is what makes Zack Britton special. He seemed to lose it a bit in 2018. Many folks were skeptical when the Yankees inked him to a three-year $39 million deal this past offseason. He has done nothing but prove the Yankees right thus far. We are talking about a reliever that has produced 11 straight scoreless innings and counting and is the healthiest he has been in the last two seasons. Keep an eye on Britton’s increased horizontal movement on his sinker, his constant pounding of the 9th quadrant, as well as the way he attacks hitters early.

One thing to keep in mind not just for the remainder of this season, but for years to come, is that his decreased velocity and his lessened ability to strike batters out will become an issue. It’s hard to be an elite reliever and not have well above average K%. Nonetheless, his improvements this season are encouraging.