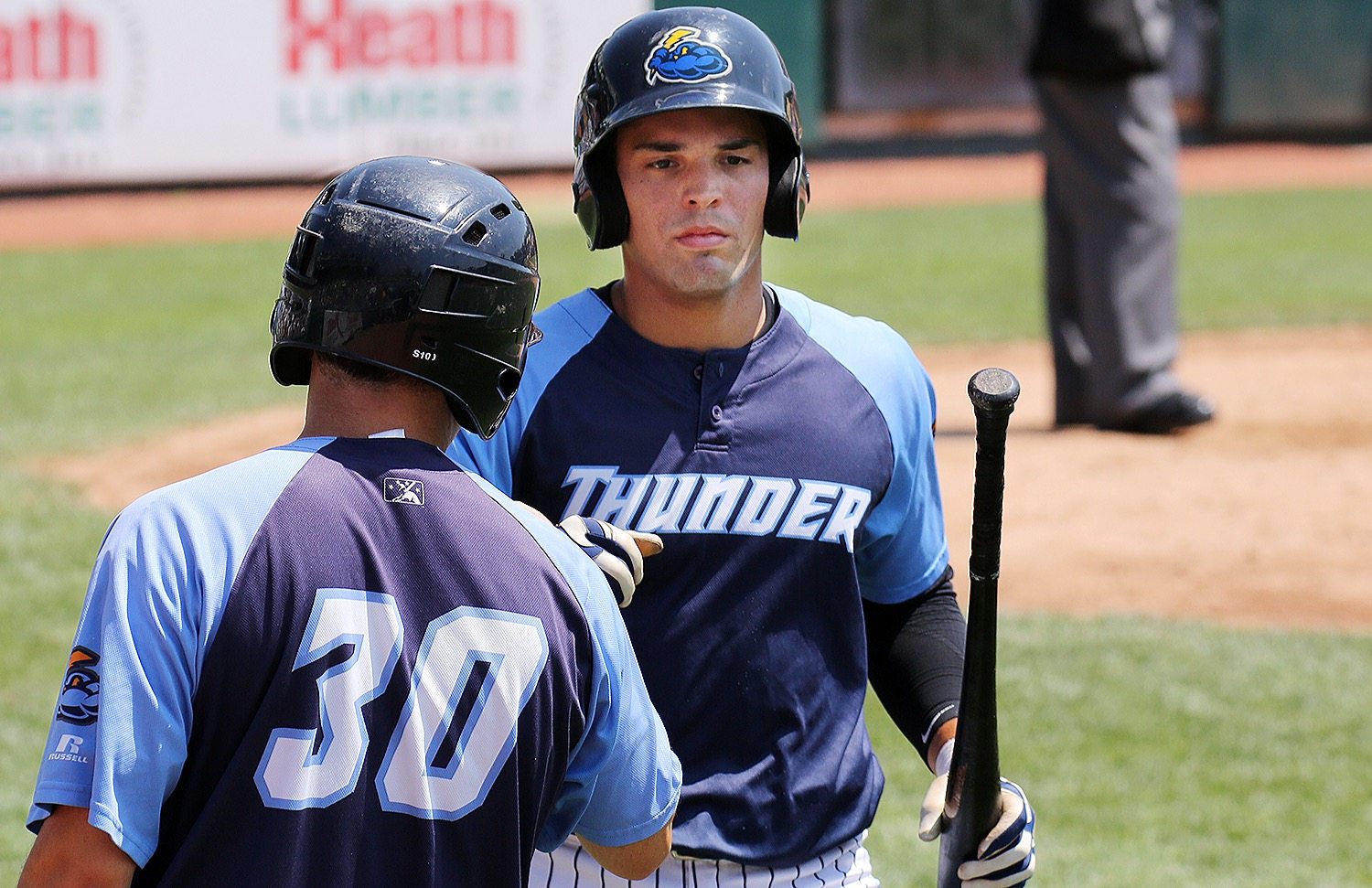 Trenton's Vicente Conde drew a four pitch bases loaded walk in the tenth inning to give Trenton a 2-1 victory on Friday night. (Photo by Martin Griff)

TRENTON, NJ – Vince Conde had three hits and Dustin Fowler hit a two-run home run to lead the Thunder to a 7-4 win over Portland in front of a Camp Day crowd of 6,588 at ARM & HAMMER Park on Wednesday afternoon.

After falling behind 1-0, the Thunder scored three times in the third inning. Conde doubled in the team’s first run with a shot over the head of the left fielder and later in the frame, Dustin Fowler doubled in Conde and Miguel Andujar drove home another with a sacrifice fly.

The Thunder added to their lead in the fifth inning when Dustin Fowler hit his fourth home run of the season. His two-run shot off the videoboard in right field pushed the advantage to 5-1 for the home team.

Staked to an early lead, Vicente Campos settled into a smooth rhythm on the mound. In the sixth, Portland broke through for some offense and 1B Cody Decker hit a three-run home run to bring the visitors within 5-4.

Cale Coshow replaced Campos and set down the next seven batters out of the bullpen. The Thunder provided some breathing room for the bullpen with a pair of runs in the eighth inning. With the bases loaded and one man out, Dante Bichette Jr. blasted a ground ball to 2B Tzu-Wei Lin who committed an error allowing Andujar and Mark Payton to cross home plate.

Matt Wotherspoon saved his second game of the season with a scoreless ninth inning.

With the victory the Thunder improved to 12-0-3 in home series’ this season and hold the second-best record in the Eastern League with a 59-38 mark. Trenton trailed Reading by eight games entering Wednesday’s action, 6.5 clear of Hartford for the Wild Card spot in the East Division.

The Thunder hit the road for a seven-game trip to New Hampshire and Portland beginning with a 7:05 match-up with the Fisher Cats at Northeast Delta Dental Stadium. The Thunder return home to host the Altoona Curve at 7 p.m. Thursday, July 28.