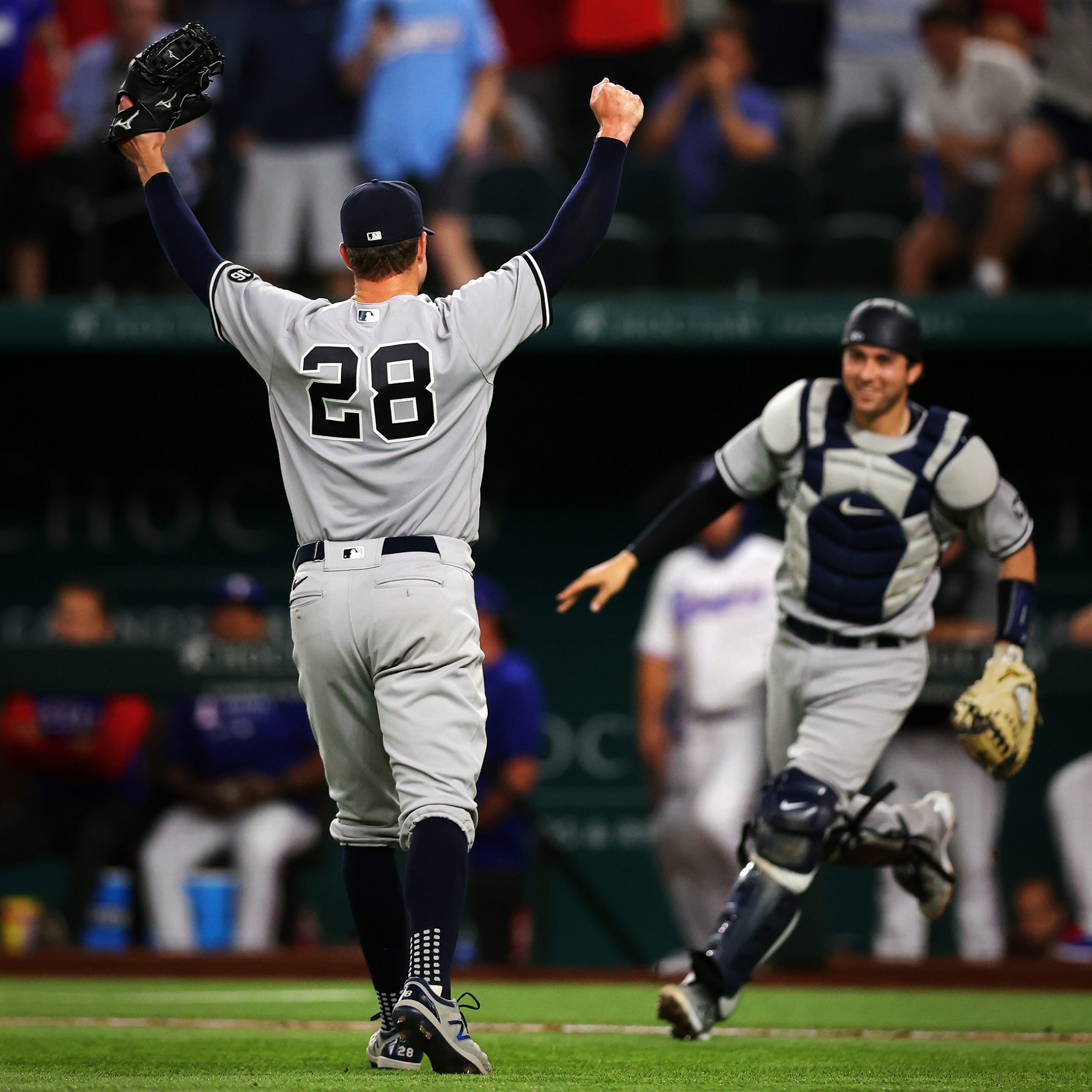 Corey Kluber was dominant on Wednesday night against the Texas Rangers and was one-batter shy of being perfect on his way to his first no-hitter of his historic career. He threw nine hitless innings, giving up just one walk and striking out nine over the course of 101 pitches thrown on Wednesday night. This was the sixth no-hitter of the 2021 MLB season, and the fourth no-hitter for a Yankees’ pitcher on the road in franchise history (first since 1951). In total, the Yankees have 12 no-hitters.

With tonight’s outing, Kluber also becomes the first pitcher to throw a no-hitter at the age of 35 plus since former Yankee David Cone.

Kluber, a right-handed pitcher from Stetson and fourth round draft pick in 2007 has a storied career at age 35. He’s a two-time Cy Young Award winner and has just added a no-hitter to his Hall-Of-Fame resume. He spoke with Meredith Marakovitz of YES Network following the game.

“It’s all kind of emotions. It’s excitement, obviously, but also a relief because it’s over,” said Kluber. “We were fortunate in that they hit them right at people.”

He pitched one inning with the Rangers in 2020 before tearing a muscle in his shoulder in 2020 and then becoming a free-agent. He was signed by the Yankees in 2021 and pitching just his ninth regular season game with the club. He called tonight a fun night to be a part of. 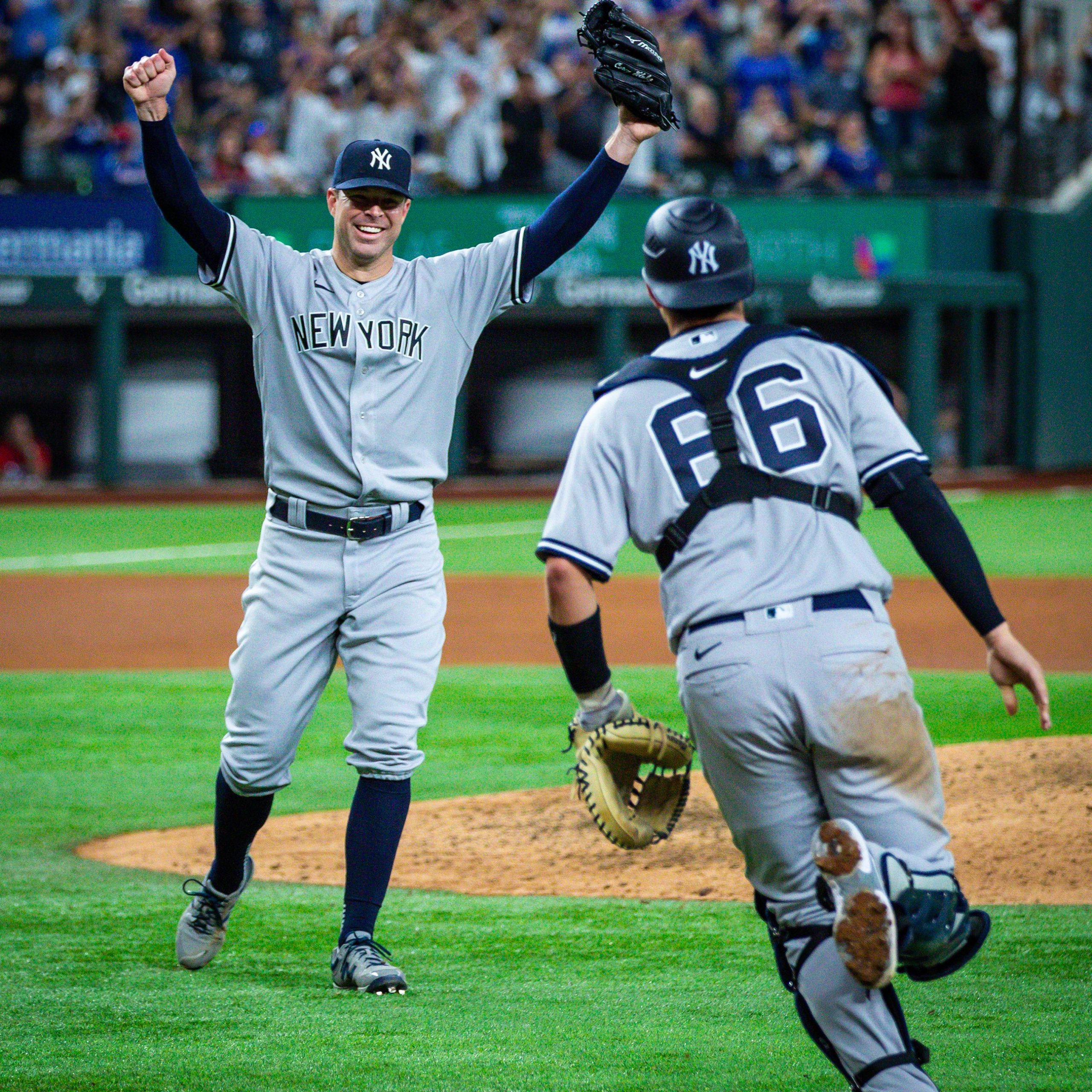 “This was a lot of fun,” stated Kluber. “It was a well-played game on both sides, we were able to scratch out a fewruns there. And it was fun to be a part of.”

Kluber credited catcher Kyle Higashioka with calling a great game and keeping the Rangers’ on their toes. Higashioka said his two-seam and cutter were playing well, his curveball was the best he’s seen it, and he was executing well and had everything going for him.

Asked about the feeling after the final out, Higashioka said, “It was almost like what you would imagine after winning the world series. It was a euphoric feeling. He lifted me off the ground and was pumped.”

“He was unreal back there tonight,” said Kluber about Higashioka behind the plate. As is customary, Kluber said he will be getting Higashioka something special to commemorate this night.

Manager Aaron Boone said he felt it in the first inning that it could be a special night. “It popped in my head in the first inning,” said Boone. “That was so much fun to be a part of; to watch Corey go out there and spin that. It was truly a privilege. I had butterflies in that ninth inning and to witness that was truly special.” 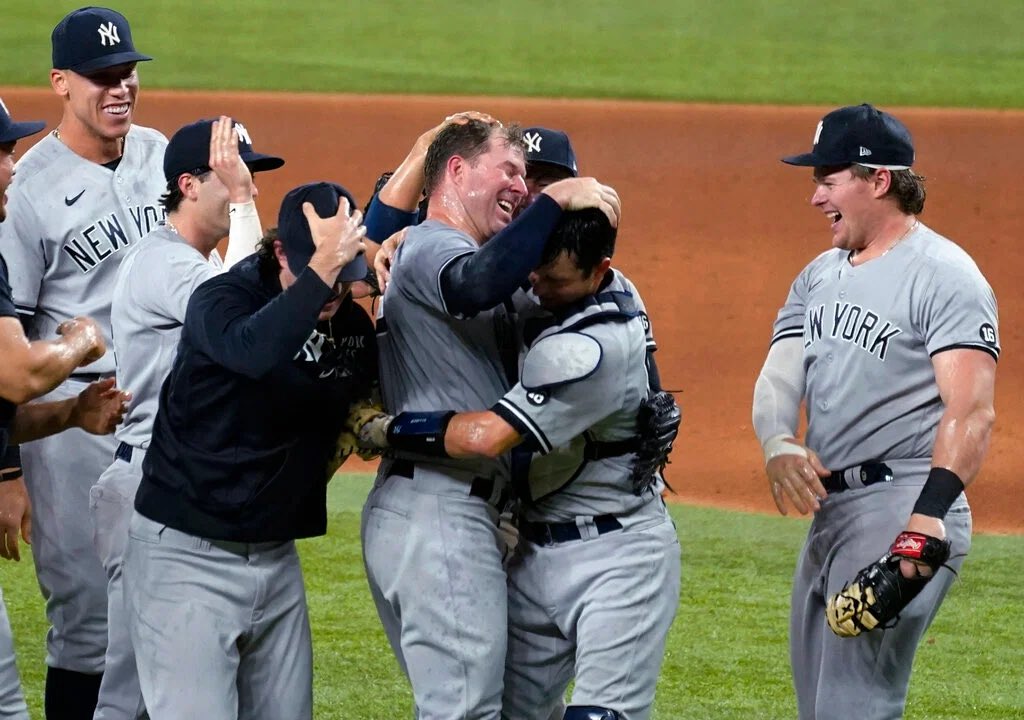 Yankees’ players continued to react to the special night. Tyler Wade stated, “That was the coolest thing I’ve ever been through in my life. I’m getting goosebumps right now just thinking about it.”

“This was a lot of fun to be a part of,” Kluber reiterated to the media after the game on Wednesday night. He said he was aware of what was going on the whole night, but the sixth inning is when he really started thinking about the fact that he had the no-hitter going on.

“It’s not all that often you get to be a part of something like that,” said Kluber. For him, he said it was that much more special to see how much the no-hitter meant to not only him, but the whole team. As a first-year Yankee, he said this was special. “This is a group of guys I’m proud to do this with.”

He also said it was special that it happened in Texas considering the past couple years and the struggles he’s had and injuries and setbacks he’s dealt with.

Kluber said his family was not in attendance, but did watch the last inning of the game to celebrate that moment virtually.

It was a special night in Texas for Corey Kluber and the Yankees and a night that will be celebrated and remembered by fans for years to come.