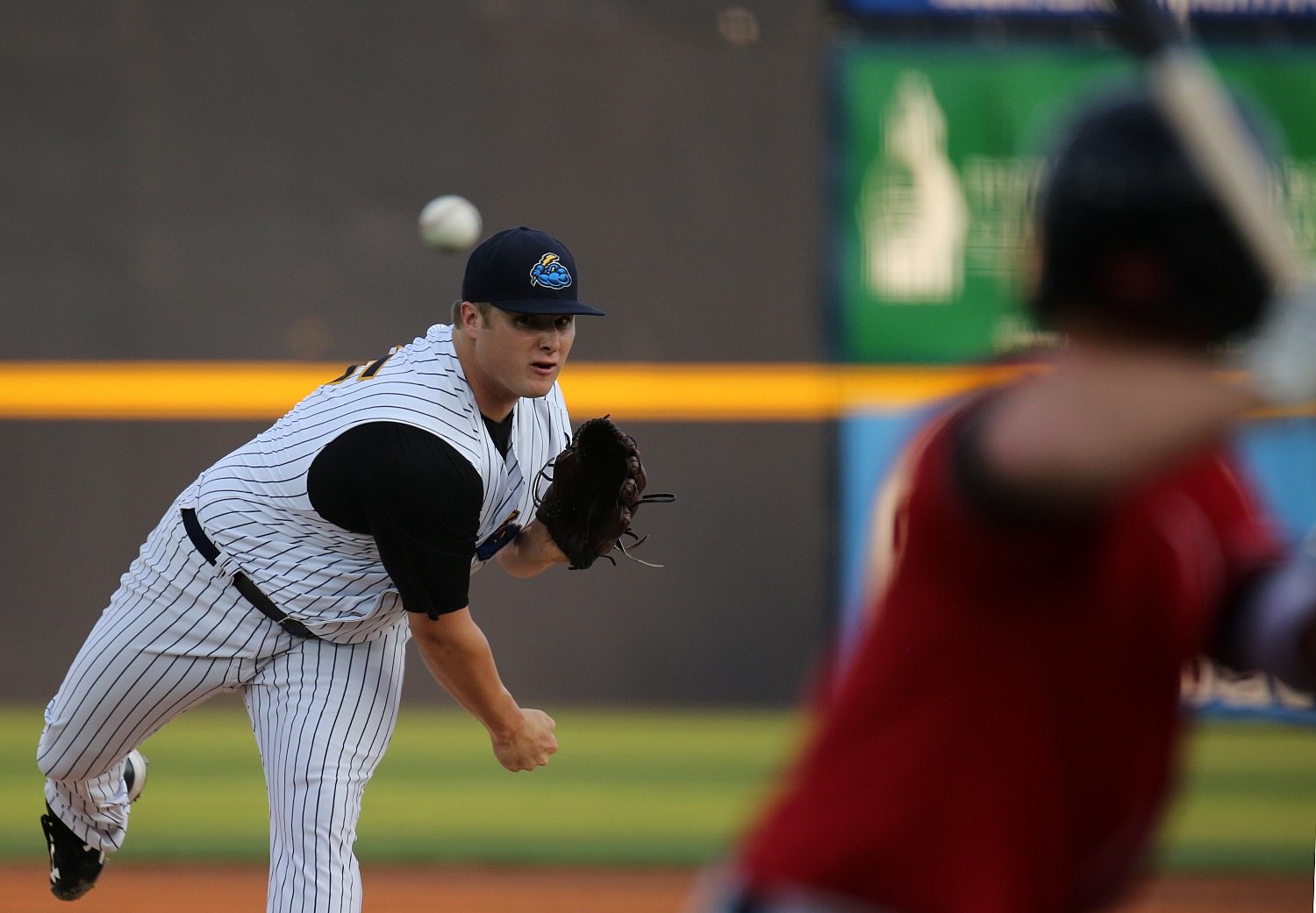 Cale Coshow throws against New Hampshire last Monday. He gets the ball in Akron Monday. (Photo by Martin Griff)

TRENTON, NJ – Perhaps this project of moving pitchers in the Yankees system from the bullpen to a starting role – or vice-versa – began with right-hander Cale Coshow.

Coshow, of course, is the 6-foot-5, 260-pound power thrower who, after performing out of the bullpen since being drafted by the Yankees in the 13th round in 2013 out of Oklahoma Christian, was moved to the rotation during his time at Class-A Advanced Tampa in 2015.

Still 23, he responded by throwing a career-high 114 innings among Charleston, Tampa and Double-A Trenton, finishing with a 9-5, 2.45 mark in 33 appearances (15 starts) and a strikeout/walk ratio of 97-28. The big Oklahoman is a fun guy, who is at peace with himself.

“I’m glad to be where I am, getting the opportunity that I am, and I thank the Yankees for that,” Coshow said. “I’m really feeling good.”

It was easy to see why the Yankees first envisioned Coshow as a reliever, with a fastball that has hit 97 and often sits at 94-96, with a cutter that just manages to miss bats. It also is easy to see why he is now a starter, throwing, in addition, a slider and a changeup which he is working on improving.

Off to an 0-1, 3.88 mark in four starts, Coshow had his best outing of 2016 April 25 vs. the New Hampshire Fisher Cats. He threw 5.2 innings, allowed two runs that were both unearned and struck out five. Seemingly on his way to his first 2016 win, he was sidetracked by some shoddy bullpen work that evening.

Yet, he takes it all in stride.

“I just want to pick things up and continue what I did last year and improve,” said Coshow. “I know I can get hitters out at this level, and I am working on better developing my slider and change, so I can set up my fastball better.”

Coshow, who was scheduled to start at Erie Sunday, will now get the ball at Akron Monday night, has a strong arm. He has no issue pitching to contact and coming at hitters. He is also starting to grasp both the reading of swings and pitching in patterns,

“Cale has a good approach to pitching,” said Trenton pitching coach Jose Rosado. “We are working on fine-tuning a few things in his bullpens..”

Coshow is a hard worker and knows what he has to do.

“I need to command all my pitches all the time out there,” he said. “You can’t rely on your fastball all the time at this level, as I found out the end of last season when I was here. I’m really working on my off-speed stuff.”

With the trade of fellow prospect Rookie Davis to Cincinnati in the Aroldis Chapman deal, Coshow, along with Brady Lail and Ronald Herrera, becomes a key right-hander in manager Bobby Mitchell‘s Trenton rotation along with lefties Dietrich Enns and Jordan Montgomery.

“Cale really attacks the hitters,” said Mitchell. “He has a plan out there.”

Coshow is following the right path to succeed as a starter. Hs fastball is a plus-pitch, while his cutter has shown improvement in the early going this season. The change is also getting there, with the slider his fourth pitch. If the change continues to advance, the Yankees’ decision to switch him from the bullpen will certainly prove to be a sound one.

His attitude, mixed with his ability, certainly are high on the potential meter.