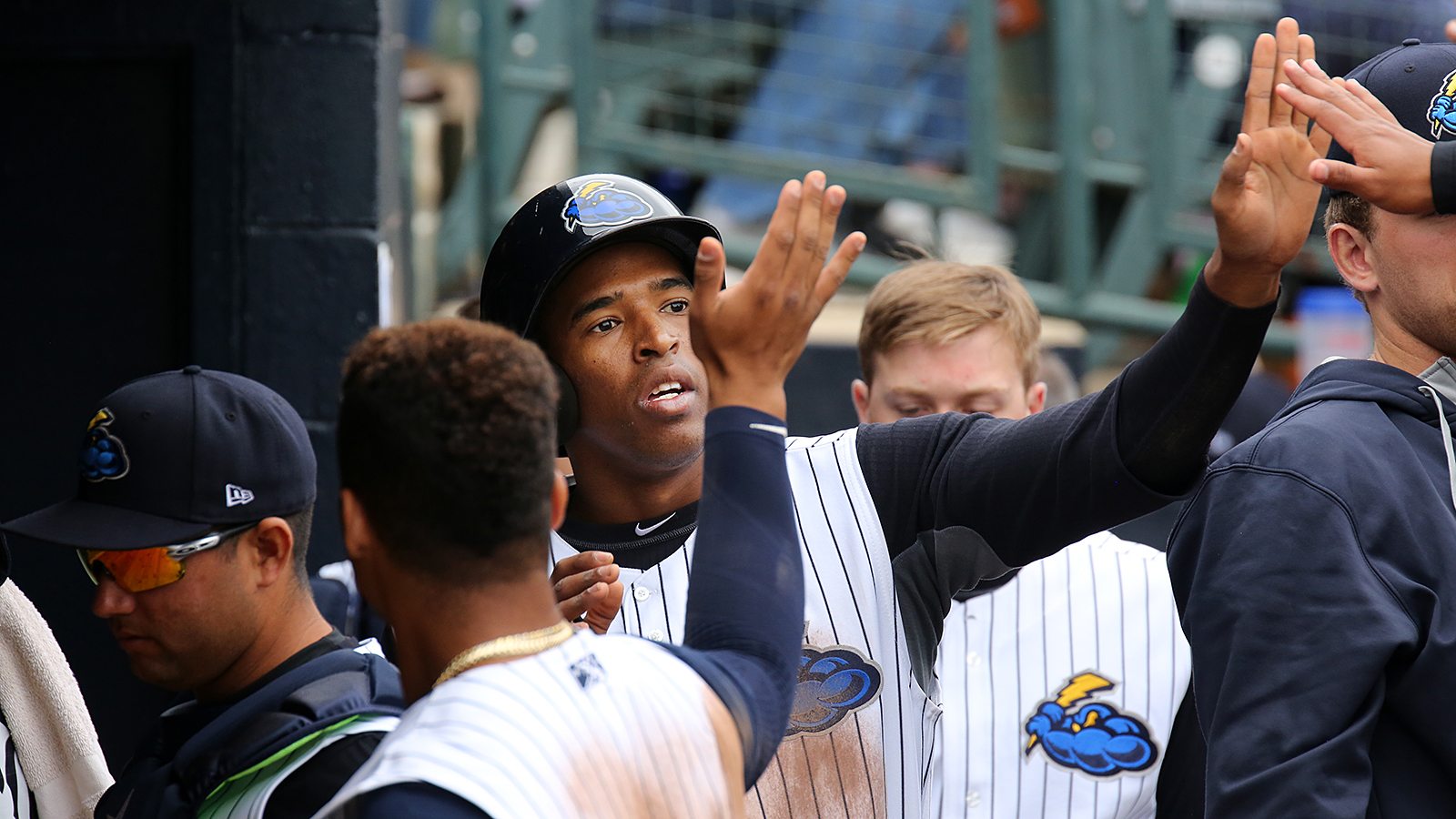 Trenton Thunder’s Rashad Crawford returns to the dugout after scoring in the 5th inning against the Portland Sea Dogs at ARM & HAMMER Park in Trenton on Thursday, April 13, 2017. (Martin Griff )

TRENTON – If you left ARM&HAMMER Park early on Sunday night, you missed it.

The Thunder were two outs away from defeating the Altoona Curve 2-1 in the ninth inning, and then they weren’t — as the Curve tied the game up with a sac-fly.

Then the Thunder had the winning run 90 feet away in the 10th inning. But, that runner never got any closer to home plate.

But in the 11th inning, the unlikeliest of heroes emerged for Trenton, as No. 8 hitter Francisco Diaz kept the inning alive with a two-out single and then centerfielder Rashad Crawford – in the No. 9 hole – stepped to the plate. Crawford sent those — of the 5,299 fans — who remained at the park home with a smile as he smashed a 2-0 pitch over the wall in right field for an electrifying walk-off 4-2 victory. 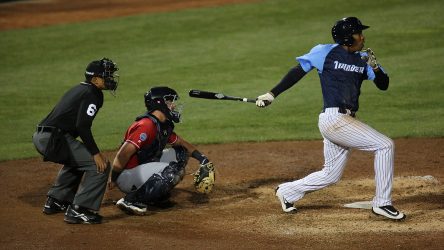 “It was a big win for us. We’ve been struggling trying to get wins and trying to score runs. And then to come that close in the ninth, and give it up is tough. But, they kept their heads up and battled and I think that’s the trademark of our team.”

“I knew he was a fastball-curveball pitcher so my thinking was to look fastball and just try to put a good swing on it,” Crawford said, still smiling. “Then when the count went 2-0 I was thinking dead-red. I was just hoping: just give me something good to hit and I’m gonna try to do my best to do some damage with it. I knew I hit it good, but it’s Trenton, so I wasn’t sure if it was going to go out.”

The Thunder (75-37) could not get anything going against Curve (58-54) starter Mitch Keller – the Pittsburgh Pirates’ No. 2 prospect who was making his Double-A debut – through the first four innings: having mustered just one hit and two total baserunners.

“He’s real good,” Mitchell said when asked about Keller. “Nice, easy motion with a sneaky fastball. He pinpointed his fastball really well and he threw some good curveballs.”

But, in the fifth, Trenton’s bats delivered. Dante Bichette Jr. got the inning started with a single, and then he moved to third on a double from Zack Zehner.

With runners in scoring position, and still no outs, Diaz delivered a much-needed RBI single to put the Thunder ahead 1-0, and then leadoff man Jeff Hendrix brought in the second run with a sac-fly into the corner in left field.

“I think Zehner’s double was the key to that inning,” Mitchell said. “It got two guys in scoring position with no outs, so it took some pressure off the guys coming up.”

Trenton also got another quality outing from starter Brody Koerner. Koerner went 5 1/3 innings, gave up six hits and one run (earned), while walking one and whiffing two. His most impressive inning came in the second when Altoona had two-on and no-out, and he escaped the jam without giving up a run. 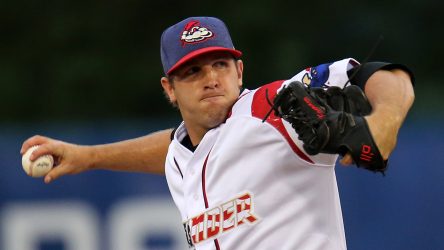 “That was huge,” Mitchell said of Koerner’s effort in the second. “First, he fielded that bunt perfect and threw the lead guy out at third for the first out. And then it made it real tough for them to score a run and he pitched right out of it. I thought that he kept his composure throughout that inning and it paid off.

“Whenever he stops nibbling and he starts working ahead, he’s good, and he did that tonight. He made some good pitches in hitters’ counts and he threw a good change-up to get some swings. He did a great job I thought because he kept us in the ballgame and we didn’t have too many opportunities to score early.”

Koerner was in line for the win until Cody Carroll blew the save opportunity in the ninth. But, that only gave way to Crawford’s heroics.

“This is awesome,” he said. “You know, we’re trying to clinch (the playoffs) as early as possible and wins like that build character for the team and give everybody confidence going into the next game.”

The Thunder will now have an off-day Monday before they begin a seven-game road trip. The first stop will be Hartford where they will begin a three-game set with the Yard Goats on Tuesday. First pitch for that game is scheduled for 7:05 p.m.
—

Nick Solak legged out an infield single in the first inning to extend his season-best hitting and on-base streaks to five straight games.

In four save opportunities with the Thunder this season, Cody Carroll has recorded just one save. However, Mitchell was optimistic about what he has seen from Carroll so far: “You know, he’s getting better and better every time,” the manager said. “Tonight, he only had one walk, but obviously that killed him. It was the run that scored. But, his command has been better. I think he’s progressing forward and becoming a big-league pitcher – eventually.”