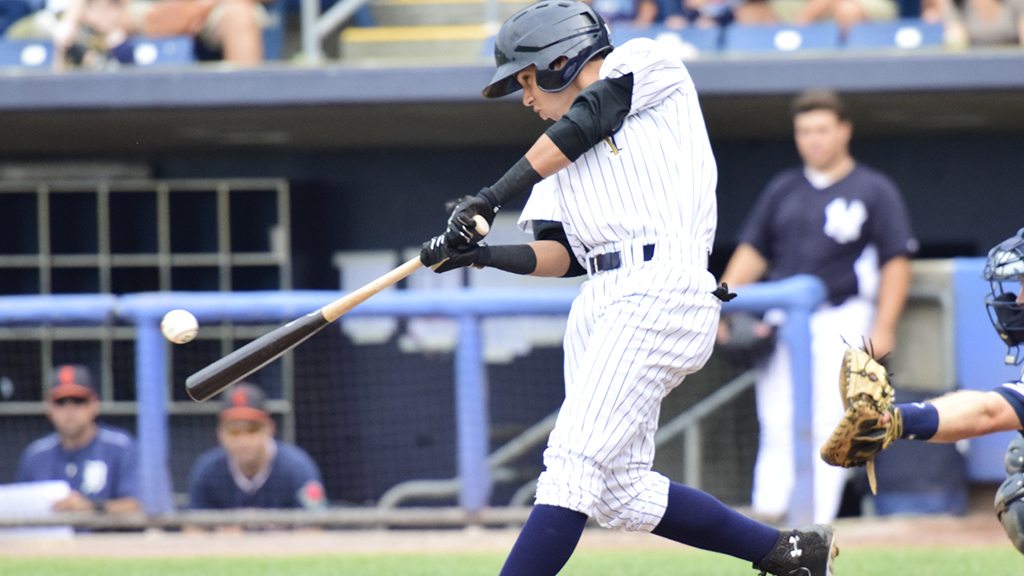 STATEN ISLAND, NY – The Staten Island Yankees pounced on the Connecticut Tigers for 10 runs on 15 hits as they took game 1 of a 3-game set with the Detroit Tigers affiliate.  Leading the Baby Bombers was 18 year old shortstop Danienger Perez who went 3-for-4 with 3 RBIs.

Perez was signed as an international free agent last year on the first day of the signing period.  He was part of the huge spending spree the New York Yankees had.  Prior to coming to Staten Island he hit .238 between the Dominican Summer League Yankees and the Gulf Coast League Yankees.

Also getting 3 hits in the ballgame was right fielder Trey Amburgey who was 3-for-4 with 2 RBIs in the cleanup spot for the Yankees.  Ryan Krill and Jake Hernandez were both 2-for-4 with an RBI.  The only Yankee player to not record a hit was Zack Zehner who came into the game as a defensive replacement in the ninth inning.

Staten Island got the scoring off early on the in the game, taking the lead in the bottom of the first inning.  With 2 outs Trey Amburgey singled to center, stole second base and scored on a fly ball single to center by Ryan Krill.  Krill moved to second and then scored when Jhalan Jackson and Brandon Wagner hit back-to-back singles.

The Yankees added 2 more runs in the bottom of the second.  With 1-out Danienger Perez lined a single to left, then moved to second on a walk to Jeff Hendrix.  After a fly out Trey Amburgey would clear the bases with a ground ball double to right.  Amburgey was thrown out at third on the play to end the inning.

In the bottom of the third inning the Baby Bombers really opened up the game with 5 runs.  Ryan Krill started it off with a line drive double to right.  Brandon Wagner then walked with 1 out before Jake Hernandez singled to center to bring home Krill and move Wagner over to third.  Drew Bridges brought home Wagner and moved Hernandez to second on a soft fly ball single to center before Danienger Perez cleared the bases with a triple.  A wild pitch brought home Danienger Perez to give the Yankees a 9-0 lead.

Ethan Carnes earned the win for the Staten Island Yankees, his second of the season with 6 shutout innings of work.  Carnes did not allow a runner to reach base until the fourth inning when he allowed a single.  Overall he allowed just 3 hits and a walk while striking out 3, throwing 89 pitches.  He was followed by James Reeves who earned the save after allowing 2 runs on 5 hits and a walk over 3 innings.

Monday night the Staten Island Yankees look to continue the offense outburst as they return to the Richmond County Bank Ballpark to take on the Connecticut Tigers in game 2 of the season.  Kolton Mahoney is expected to make the start for Staten Island.