Despite Flux of Injuries, The Yankees Have an Elite Athletic Training Staff 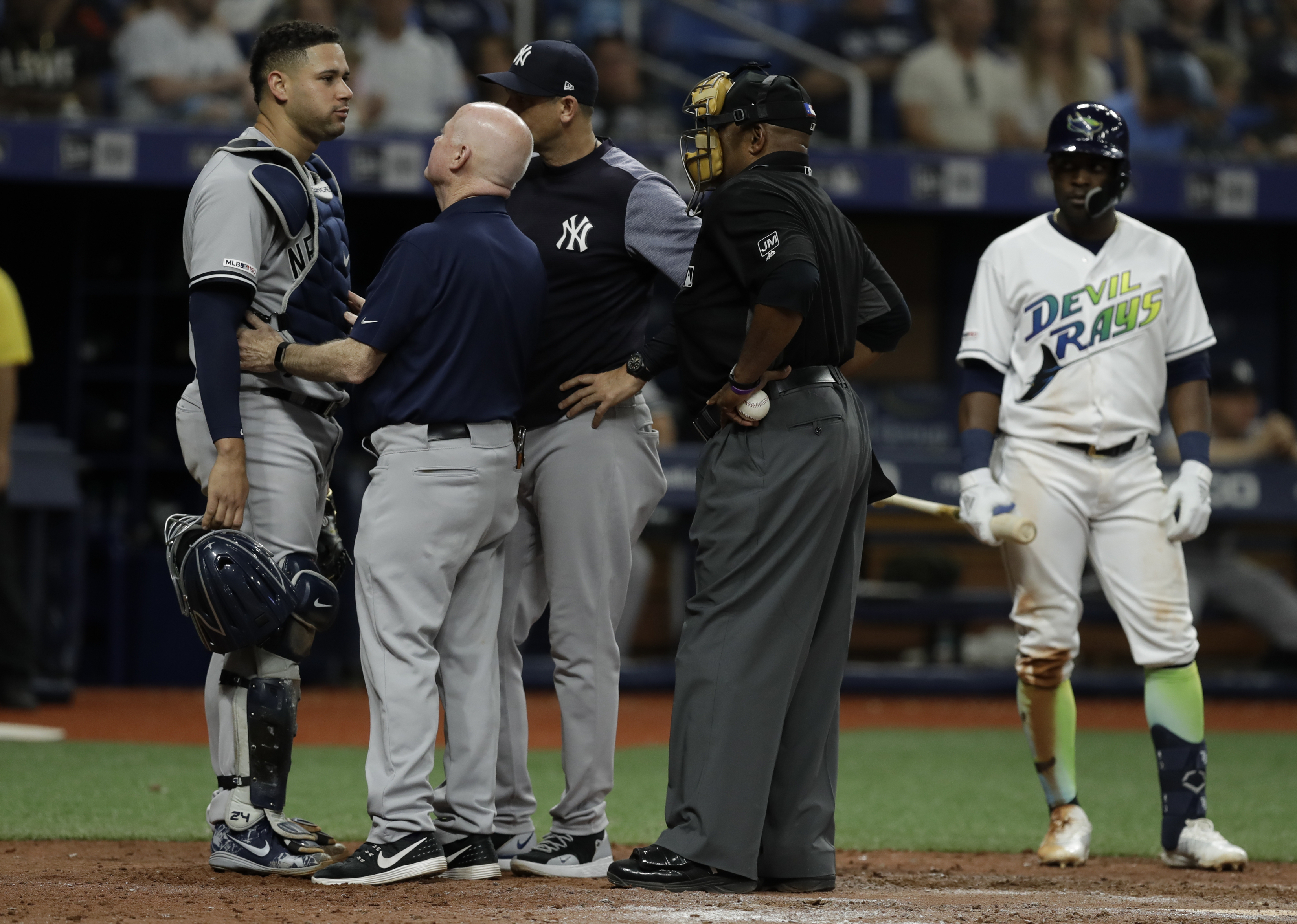 A New York Yankees trainer talks to catcher Gary Sanchez after he was hit in the head on a swing by Tampa Bay Rays' Guillermo Heredia during the eighth inning of a baseball game Saturday, May 11, 2019, in St. Petersburg, Fla. (AP Photo/Chris O'Meara)

The New York Yankees reported to Spring Training in Tampa, Florida with championship aspirations and expectations. The expectations, fortunately, have not fallen since then as a result of a series of unfortunate injuries to a monstrous 22 players at the Major League level.

Miguel Andujar, Dellin Betances, Greg Bird, Jacoby Ellsbury, Didi Gregorius, Ben Heller, Aaron Judge, Jonathan Loaisiga, Jordan Montgomery, Luis Severino, Giancarlo Stanton, and Troy Tulowitzki have either spent all or most the season on the injured list. Players such as Gary Sanchez, Clint Frazier, James Paxton, CC Sabathia, Aaron Hicks, Domingo German, and Luke Voit are among other prevalent names that have all also spent a chunk of time nursing ailments of their own.

Who is to blame? Not the athletic training staff.

Blaming them is preposterous. They are the ones who should be getting credit for all their hard work and dedication to getting these injured players back on the field.

Donohue, the Yankees head athletic trainer, learned from the legendary Gene Monahan and is in the midst of his 41st season with New York. How long was he mentored by the great ‘Geno’? Twenty-six years (1986-2011). That’s a long time of hard work and patience to get to be the boss. Donohue was named the winner of the “Most Distinguished Athletic Trainer Award” in January of 2018 and was named to the American League All-Star Medical Staff at last season’s midsummer classic at Nationals Park.

Schuk, 36, currently serves as an assistant to Donohue and as the Yankees’ physical therapist. A role in which he has been in for six years now.

Lentych is Donohue’s other assistant and is spending his 16th season with New York. 2018 is his fourth season and the Major League level. Prior to getting called up to the big leagues, Lentych spent 12 years in the minor leagues, including four as Head Athletic Trainer, Player Development. In 2009, he was named the “Eastern League Athletic Trainer of the Year” when he was with the Trenton Thunder (Double-A).

My personal thinking was confirmed by others after talking to a couple of people that have direct knowledge of the inner workings of the medical training staff, as they all unanimously came to their defense as well.

One source who wished to remain anonymous due to the sensitivity of the situation said, “They didn’t forget what they have learned overnight. Treatment of players comes based off your education and previous experiences. That group has tons of both. It’s especially tough because they can’t defend themselves in public.”

Another source who also wished to remain anonymous said, “The Yankees are an organization that invests a ton of money into research for injury prevention, but freak things happen. It’s the nature of the beast. Some years you might be completely healthy, others might be tough like this one has been for them. You cannot predict the future. You can try to take preventative measures based off of studies, experiences, and technology all you want but unfortunately its an inexact science.”

In conversation, one thing that was brought up is that people tend to forget that medical training staff’s are sometimes only as good as players will let them be. This is in reference to the plethora of variables that exist in the field such as the lack of transparency of certain athletes inability to notify them of an ailment, overuse, preexisting conditions and players use of personnel outside the organization.

It is really easy to point the blame at someone or a group of people in this case. After all, fans and ownership alike want answers to why the organization’s roster has been decimated by injuries. GM Brian Cashman has even admitted to having to go to the Steinbrenner family to defend these men and their peers.

Cashman told the media earlier this season that New York has “one of the best, we feel, medical teams, going from our doctors to our trainers to our physical therapists and strength and conditioning people. There’s no new training regime or anything that’s been instituted, so all of these injuries are so distinct and different that it just happens to be a real rash of bad luck.”

It is understandable to be frustrated and wants answers on why your favorite player isn’t on the field, but please, I urge you not to point fingers at people who are only helping the situation. These are good people who have sacrificed so much to get into their position. In some cases, several decades working their way up the ranks. Trust the entire organization from top to bottom, after all, they are members of the New York Yankees organization for a reason.