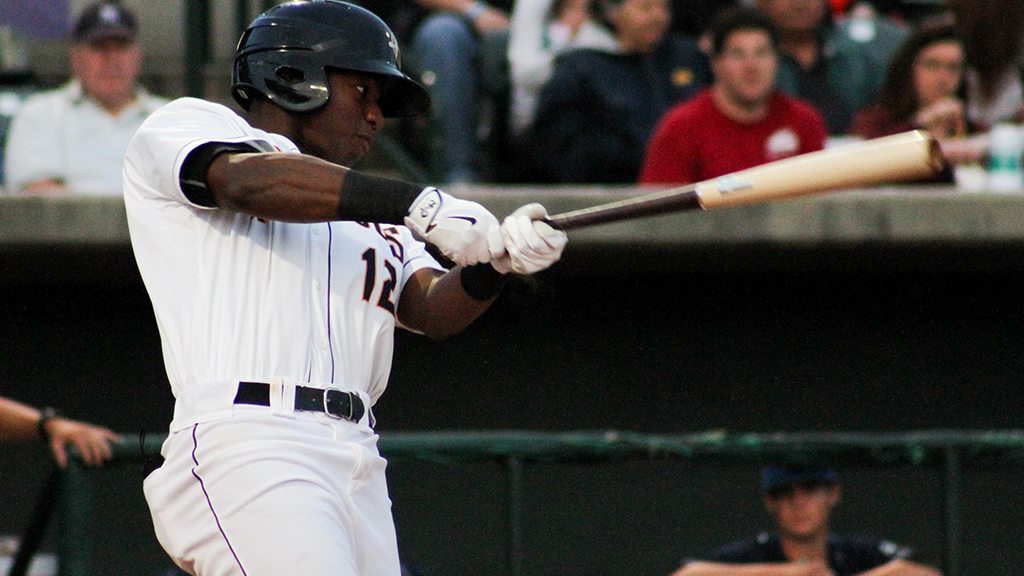 After dropping a 5-0 decision to the Shorebirds in game one of the pair of scheduled seven-inning contests, Coleman’s five RBI night propelled the RiverDogs (17-6) to victory and finish their six-game road trip with a 4-2 record.

The RiverDogs remain atop the Southern Division standings after finishing tied with Hagerstown for the best record in the South Atlantic League after a 16-6 month of April.

RiverDogs Blanked in Game One

Domingo Acevedo (2-1) worked from the stretch for much of his sixth outing of the season and pitched with baserunners on in each of his five innings of work to open the evening’s doubleheader. The 6’7” righty out of Villa Los Almacigos, Dominican Republic left a runner in scoring position stranded in each of his first two innings of work before giving up a one out triple to Delmarva centerfielder Cedric Mullins in the third followed by an RBI base knock by Ricardo Andujar that made it 1-0 Shorebirds.

In the fourth, Acevedo played with fire once again, loading up the bases with two outs with Mullins standing in. The switch-hitting outfielder ripped a single to right to score two, and a bobbled play in right by Jhalan Jackson allowed another two to score on a wild play that cleared that bases and made it 5-0 Delmarva in a flash.

Acevedo finished the night logging five innings allowing five runs (three earned) on eight hits while walking one and striking out five to pick up his first loss of the year. Delmarva lefty Brian Gonzalez (3-0) worked around a pair of walks and two hit batters to finish with six scoreless innings on four hits while striking out three.

David Palladino had an excellent bounce back performance, striking out the side in the sixth in his one inning of relief.

After being shutout and held to just four hits, all singles, in game one, Charleston’s bats came alive in game two, as they outhit Delmarva, 8-3, to back a solid one-two punch from Cody Carroll and Simon De la Rosa (1-1) on the mound.

Coleman rocked the first of his two long balls to the right field corner in the second after fellow Texan, Chris Gittens, led off the inning with a walk, to put the RiverDogs on top 2-0.

In the fourth, Gittens roped a double to the wall in right-center to lead off the frame and Coleman walked to put the Texas two-step on the base paths once again. Kyle Holder shot a base hit to right that scored Gittens, but Coleman was tagged out at the plate coming in right behind Gittens on a heave from Shorebirds right fielder Natanael Delgado, pushing the RiverDogs’ lead to instead just 3-0.

Delmarva made Carroll work in the fourth when three straight Shorebirds reached to lead off the inning and load up the bases. After a force out at the plate on a fielder’s choice ground out by Shorebirds catcher Yermin Mercedes, Ryan Mountcastle hit a blopper into no man’s land in left center field that would have landed for at least a two RBI base hit had it not been for the diving effort of Charleston centerfielder Jeff Hendrix who laid out for a web gem to keep it at a sacrifice fly and a 3-1 Charleston advantage.

After a pair of walks to lead off the sixth by Hoy Jun Park and Gittens, Coleman left no doubt with a three-run bomb to the same spot and then some over the right field wall that put the RiverDogs up 6-1. The two long balls from Coleman were his first two of the season, and his second and third extra-base hits of the year that all came in the series in Delmarva.

After back-to-back singles by Audie Afenir and Carlos Vidal, each their first hits of the season and their first as RiverDogs, in the seventh, Hendrix drove in the seventh run of the ballgame on an RBI fielder’s choice ground out to short.

The Shorebirds answered back with a run of their own off of Andrew Schwaab in the bottom half, but the RiverDogs would close out the 7-2 victory.

De la Rosa was superb in his two innings of relief, retiring all six batters he faced in order and fanning four in a row to pick up his first win of the season. Carroll held steady despite the bases loaded conundrum, finishing with just one run allowed on one hit with three walks and a pair of strikeouts.

The RiverDogs are back in action at Joseph P. Riley, Jr. Park on Wednesday, May 4 for a 7:05pm start against the West Virginia Power, the Single-A affiliate of the Pittsburgh Pirates, to start a seven-game homestand. Join the RiverDogs and the Greater Charleston Restaurant Association as they help recognize individuals in the local service industry. Service industry employees, who show proof with a pay stub, will receive 30 percent off of their game ticket and food. It’s also a “Wine Down Wednesday,” presented by WEZL, as 50 lucky fans will be given free wine glasses and discounts in the Wine Garden from 6-7pm. There will be numerous in-game contests that spotlight our service industry members. It’ll also be Senior Wednesday as seniors who enter the stadium before 7pm will receive a free hot dog, chips and a drink.