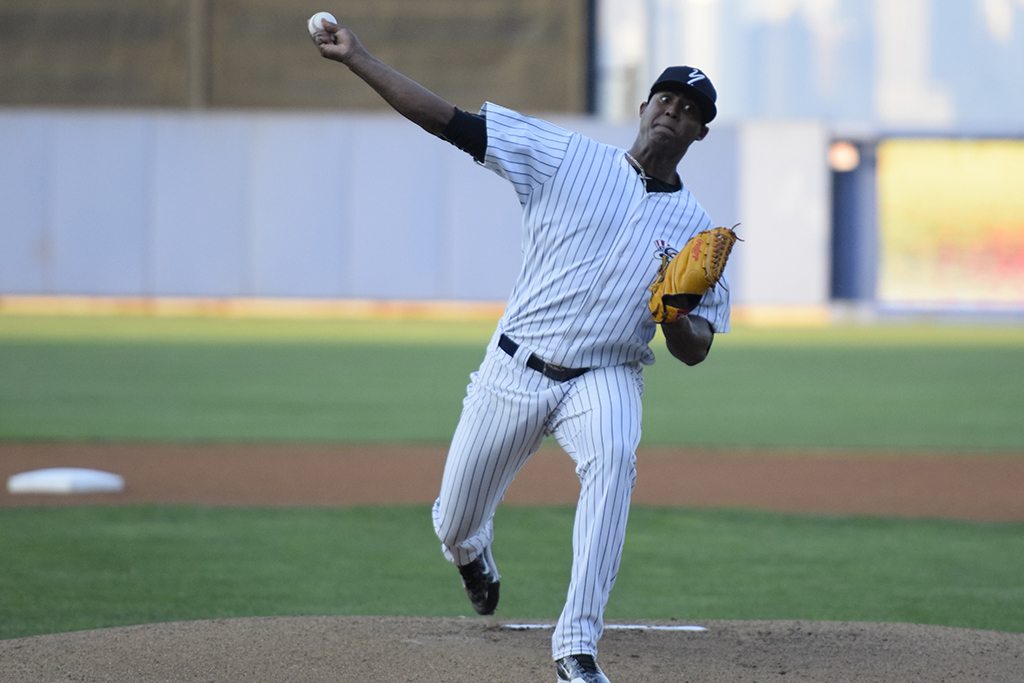 At the lowest reaches of any minor league farm system individual accomplishments assume precedence. Rare is the case when team success matches personal objectives. Every resource is places in the hands of the managers and coaches chosen by the organization to see the plan though and have projection translate to results. With the Staten Island Yankees, Domingo Acevedo burst onto the scene in 2015 and on Friday was named by Baseball America as short-season pitcher of the year.

In a league typically dominated by power arms, Acevedo quickly impressed, showcasing a fastball, which scouts clocked at 103 miles per hour at its peak. His slider and changeup progressively developed in strong secondary pitches keeping opposing hitters off-balance. Early in the season Acevedo relied heavily on those offerings, prompting the coaching staff to remind him to throw the fastball more frequently, “He tends go to his changeup and his slider and we need to remind him, “hey, you throw 98-99 miles per hour”, Staten Island Yankees manager Pat Osborn said. “It is a weapon. Use it”.

In twelve starts, Acevedo dominated the New York-Penn League to the tune of a 3-0 record with a 1.69 earned run average in 11 starts with Staten Island. Acevedo became a force down the stretch, allowing one run or less in six of his last seven starts. His six inning performance in the New York-Penn League semifinals against the Tri-City ValleyCats on Thursday night led Staten Island into to the championship series.

Acevedo’s breakout season catapulted him onto the organization’s list of MLB.com’s top 30 prospects. At 6″7, Acevedo has draw comparisons to Michael Pineda with both delivery and pitch selection. Unlike many taller hurlers, command has not been a concern for Acevedo. His ability to avoid deep counts has enabled him to pitch deeper into games and burst onto the prospect radar as one of the most talked about pitchers in the Yankees organization.