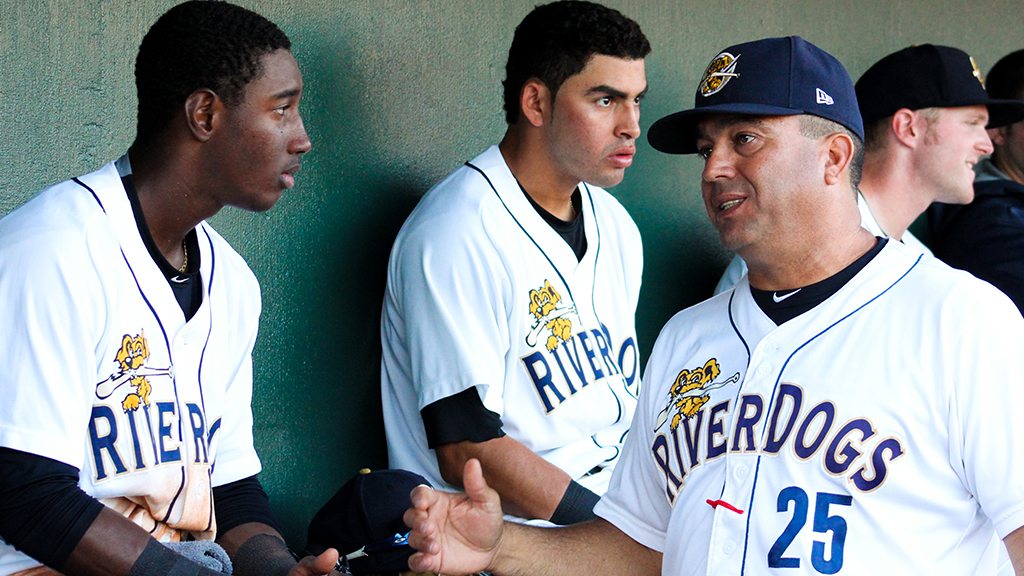 CHARLESTON, SC – The New York Yankees have announced that Luis Dorante, who guided the Charleston RiverDogs the past two seasons, will return as the club’s manager in 2016.

Dorante becomes the first manager to return for a third consecutive season since Torre Tyson guided the RiverDogs from 2007-09.

“It’s wonderful, Dorante said of his return to Charleston. “I’m very happy to be back for the third year. Last year, I enjoyed it here big time.”

“My family enjoys Charleston and being around the stadium,” he added. “The facilities are nice, and the atmosphere, along with the people of Charleston, are phenomenal.

“Our fans are great as they’re always on top of things regarding who is doing well. They give us good feedback.”

Prior to joining the RiverDogs in 2014, Dorante served as the bullpen coach for the Pittsburgh Pirates from 2008-10 and managed 11 seasons in the minor leagues. His first RiverDogs team in 2014 notched a 71-69 record while last year Charleston finished 66-74.

Dorante was the first base coach for the Trenton Thunder, the Yankees’ Double-A affiliate, in 2012 and ’13, and he also skippered the Aguilas de Zulia to a 34-29 mark in the Venezuelan Winter League during the 2013 offseason, good for second place. A native of Falcon, Venezuela, he spent six seasons as a player in the Boston Red Sox organization prior to beginning his coaching career.

Born on October 25, 1968, Dorante appeared in 221 games over six seasons in the Red Sox farm system. A right-handed batter, he primarily caught, but also made appearances at first base, third base and in the outfield. Dorante compiled a career batting average of .216 with 32 doubles.

After retiring following the 1993 season, Dorante joined the Montreal Expos organization in 1994 as an international scout. The next year he began his managerial career when he steered the Expos’ Gulf Coast League team to a 21-35 record. He has managed in five different leagues over his 11 seasons at the helm, including the South Atlantic League in 1998 when he guided the now-defunct Cape Fear Crocs to an 80-61 finish.

Joining the staff as the team’s hitting coach is former RiverDogs manager and hitting coach Greg Colbrunn. A veteran of 13 major league seasons as a player, Colbrunn, who resides in nearby Mt. Pleasant, interrupted his RiverDogs stint with a two-year stretch (20013-14) as the hitting coach for the Boston Red Sox, including their World Series championship year in 2013.

The 47-year-old Colbrunn spent seven of the last nine years with the RiverDogs, serving five seasons as the hitting coach from 2007-09 and 2011-12, and one campaign as the club’s manager in 2010.

The former infielder spent 13 seasons in the major leagues with stints in Montreal, Florida, Minnesota, Atlanta, Arizona, Colorado and Seattle. He won a World Series ring playing for the Diamondbacks in 2001 when the team upset the New York Yankees. He collected his second ring with the Red Sox in 2013.

Justin Pope joins Dorante’s staff after spending last season as the pitching coach for the Pulaski Yankees in the Appalachian League where he mentored the Baby Bombers to a league best 3.08 ERA. Pope also brings two years of experience as a manager under his belt, serving as the skipper for the Staten Island Yankees of the New York-Penn League from 2012-13 where his teams compiled a 64-86 record. Pope began his coaching career in Staten Island in 2010 and in Double-A Trenton in 2011.

As a player, the West Palm Beach, FL native compiled a 38-34 record with a 3.34 ERA over eight minor league seasons with the Cardinals, Yankees and Phillies organizations, reaching as high as Triple-A. A member of the University of Central Florida Athletic Hall of Fame, Pope was named an All-American in 2001before being taken 28th overall by the St. Louis Cardinals in the MLB Amateur Draft. Pope still stands as the Knights’ all-time leader in career wins (32) and strikeouts (335).

Travis Chapman returns for his second season with the RiverDogs and fourth as a coach in the Yankees system. The Jacksonville, FL native enters his second season in Charleston as the defensive coach after previously making his managerial debut with the GCL Yankees in 2014 and leading the club to a division best 38-22 record.

Chapman spent eight seasons in the minor leagues as a player, highlighted by one major league appearance for the Phillies in 2003. Over his career, he hit .286 with 41 home runs and 286 RBI in 506 career games for the Phillies, Royals, Reds and Pirates organizations, appearing primarily as a third baseman. Chapman attended Mississippi State University from 1997-2000, where set school records for career doubles (71), sacrifice flies (22) and hit-by-pitches (44), as well as the single-season hit-by-pitch record (19).

Michel Hernandez will guide the catchers on Dorante’s staff in 2016, marking his fourth year in the Yankees organization after he served as the defensive coach in Double-A Trenton last season. Hernandez spent his first two years as a coach with the GCL Yankees after a 15 year playing career that included 45 games in the major league during stints with the Yankees in 2003 and the Tampa Bay Rays from 2008-09.

A native of La Habana, Cuba, Hernandez signed as an undrafted free agent with the Yankees in 1998 before compiling a .257 average with 35 home runs and 40 RBI across 15 minor league seasons. He racked up a .237 batting average with one big league home run and 12 RBI in 127 plate appearances in the Show.

Additionally, Jimmy Downam returns for his third year as the RiverDogs’ trainer while Anthony Velazquez, who also was with Charleston the last two seasons, returns as the strength and conditioning coach.

The RiverDogs, the Class A affiliate of the New York Yankees, begin their season on April 7 with a seven-game homestand that features the in-state rival Columbia Fireflies (April 7-10) and the Asheville Tourists (April 11-13). Ticket information may be secured by contact the box office at 843/577-DOGS (3647) or online at www.riverdogs.com.