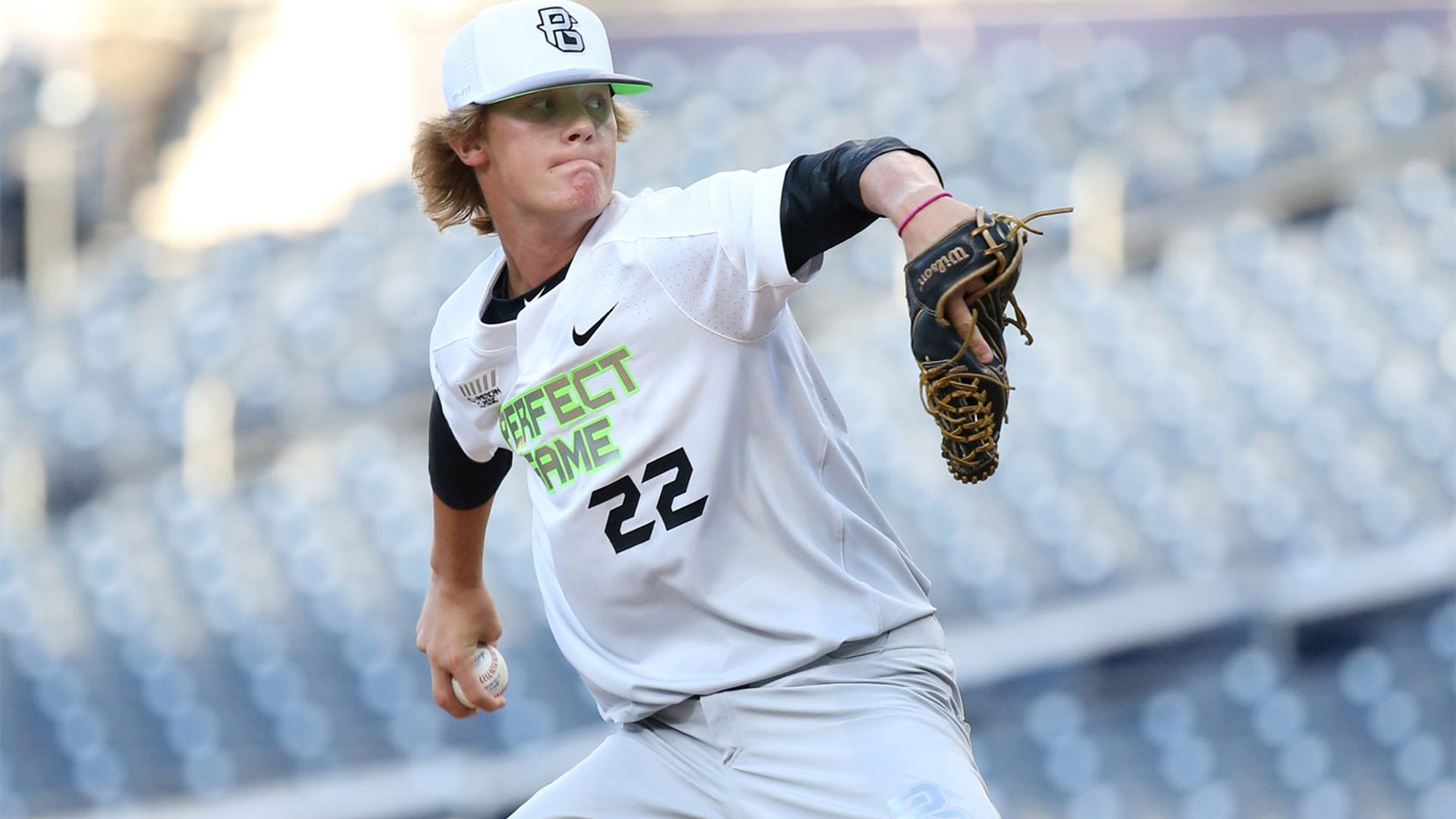 Blayne Enlow (22) of the East Team pitches against the West Team during the Perfect Game All American Classic at Petco Park on August 14, 2016 in San Diego, California. West Team defeated the East Team, 13-0. (Larry Goren/Four Seam Images via AP Images)

Blayne Enlow impressed scouts last year, with strong performances in both the Area Code Games and the 18-and-under Pan American Championships last fall. He had a particularly strong showing in the Pan American games and was one key reason that his team won the tournament. He allowed zero runs in 13 total innings. His best game came in a contest with Team Mexico, where he pitched six innings, and struck out seven batters while giving up just three hits, and zero walks.

After his impressive 2016 showing, Enlow’s 2017 season started off a bit slow, as his velocity was down from the 94 MPH mark he showed in 2016. However, he is now throwing in the 92-93 range, so his slow start probably won’t affect his stock. After all the recently turned 18-year-old is the type of pitcher that scouts know will blossom into a top of the rotation starter if given time to develop in college. It doesn’t matter that he isn’t a finished product as of right now, with his frame scouts expect him to be able to throw much harder in a few years. That is a big reason why someone will have to pay him a lot of money to forgo his commitment to LSU.

While it’s easy to look at Enlow and dream of what his fastball could become, his strongest pitch is currently his curve, and it’s a pitch that is at the top of his class. Some would even argue that he has the best curveball in the entire draft. Because he curveball is so high, he’s barely had to use his third pitch, which is his changeup. Which is why he’ll have to work on his change at the next level, he’s considered a good learner, so many expect him to be able to master the pitch.

Overall, he has a plus curve, a low 90’s fastball that many expect to be plus once he fills out his frame, and a developing changeup. He also shows a good ability to repeat his delivery, and knows how to throw strikes; it’s easy to see why many believe he could be a top of the rotation pitching prospect in a couple of years.

Enlow is a very intriguing player, who will have to be selected early to forgo his college commitment to the team he grew up rooting for in LSU. But the Yankees picking him at 16 would certainly give them a big enough slot to dissuade him from going to college. It also wouldn’t be that much of reach for the Yankees as he was ranked as the 27th best prospect by Baseball America, the 25th best by MLB.com and the 16th best by Keith Law.

While some fans believe that the Yankees prefer college prospects, I think they’ve shown the willingness to gamble on prep pitchers over the past few drafts. Since 2010 the Yankees have annually taken a prep pitcher within the first three rounds of the MLB draft. Most of the pitchers taken were taken in the third, but the Yankees did select Ian Clarkin and Ty Hensley in two of those years.