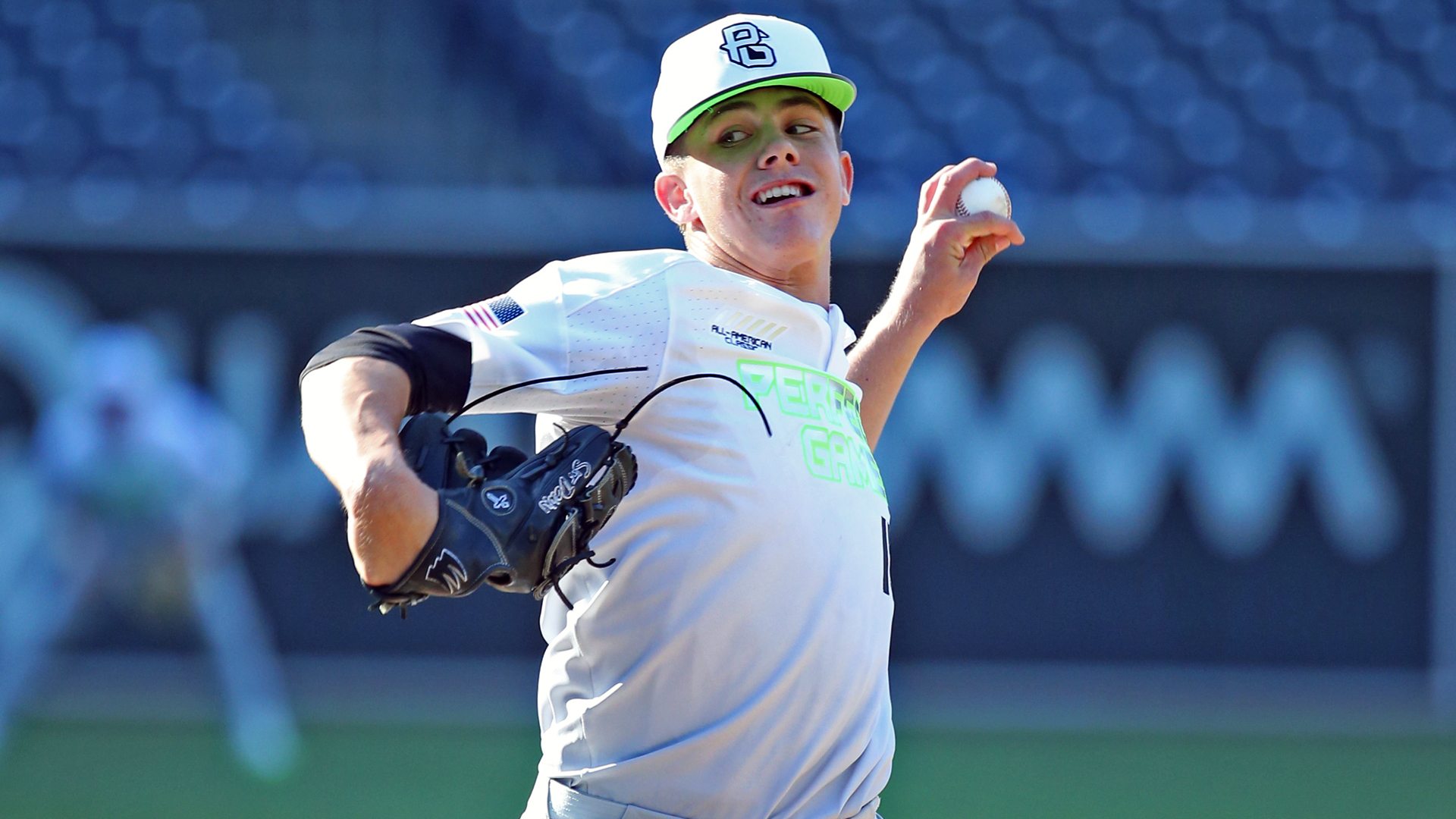 Dayton Hall (15) of the East Team bats against the West Team during the Perfect Game All American Classic at Petco Park on August 14, 2016 in San Diego, California. West Team defeated the East Team, 13-0. (Larry Goren/Four Seam Images via AP Images)

In 2015 DL Hall participated in the Perfect Game Junior National Showcase, and was featured as one of the most intriguing players at the three-day event by Baseball America. At the time of the event he was throwing 88-91 MPH fast which peaked at 92 MPH, and had flashed a promising mid-70s curveball. Hall has participated in many showcases and events since 2015, and the intrigue and talent has only grown.

His best showcase might have come at the August 2016 East Coast Pro Showcase, where he stuck-out seven batters including two of 2017’s best prospects (Jeter Downs, & Brady McConell). Hudson Bellinsky of BA wrote that it was perhaps the best performance of any prep prospect in 2016, and that Hall touched 95 MPH, showed a sharp curve, and feel for a change-up.

His strong showcase performance at ECP and other events is why he’s not only considered to be a top prospect in this draft, but also a future major league front-end starter.

Hall’s fastball and curveball are both considered to be plus-pitches, and are both graded as 60’s by MLB.com. While both pitches have the same grade, his curveball is easily his best pitch. He throws his curvce in the mid-70’s and it has great depth. Furthermore, in his MLB.com profile it is noted that his curve has a high spin rate, which is certainly something that would interest the Yankees analytical front office. He’s still perfecting his change, but shows good feel for the pitch, and should be able to develop it to be at least an average pitch.

His one weakness is that there are times where he struggles with his command, but that’s typical of a pitcher his age. Hall’s biggest MLB comp, is Scott Kazmir, due their respective sizes and deliveries. Overall, Hall has one highest ceilings in this year’s draft.

Hall is ranked highly across the board, MLB.com and BA have him ranked as the 13th best prospect, while Keith Law ranks him at number eight. Mock drafts have generally had him going in the nine-18 range. In Law’s latest mock he reported that he’s heard the Yankees are interested in Hall. He also reported that makeup concerns are pushing Hall off teams’ draft boards. So it’s certainly possible that the Yankees could end up drafting one of the best prep pitchers in this year’s class.