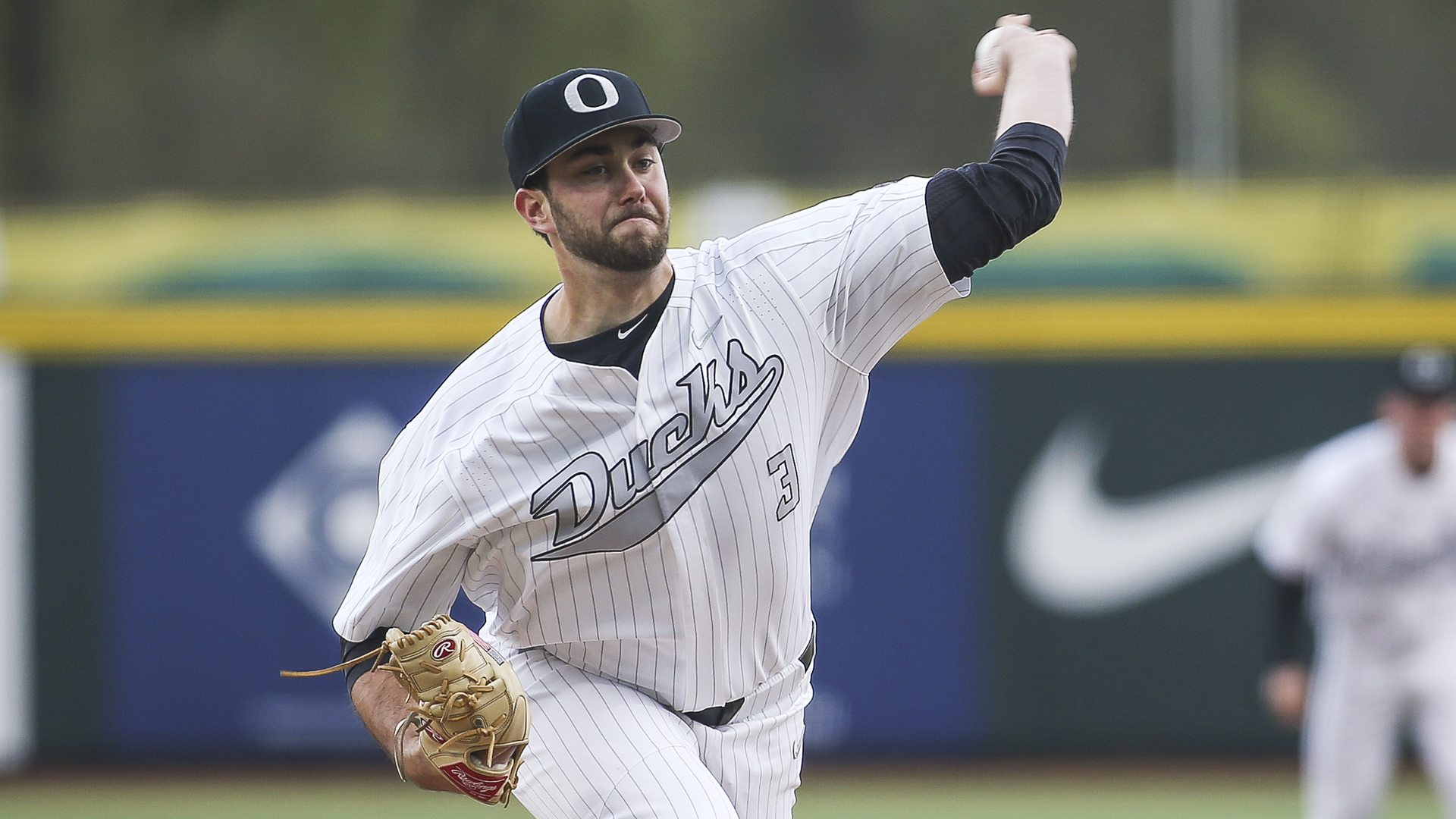 The Oregon Ducks take on the University of California, Irvine Anteaters at PK Park in Eugene, Oregon on April, 7, 2017. (Samuel Marshall/Eric Evans Photography)

Peterson was ranked as the 95th best prospect in the 2014 draft but fell to the 28th round in part due to a fractured fibula. His injury prevented him from truly showcasing his talent before the draft. If not for the injury he would’ve probably been selected within the first three rounds of the draft. Instead, he followed through with his commitment to Oregon and grew to become a much better draft prospect.

Peterson’s overall performance during his two first years wasn’t bad, but you’d certainly expect more from a pitcher with his talent. Fortunately, played up to his skills this season, and truly had an elite breakout season by posting the following numbers:2.51 ERA, 1.03 WHIP, and a 9.33 K/BB in 100.1 innings.

Peterson has put up some of the best games of any college starter this season; he’s had a 17 and 20 strikeout game this season. He’s also shown elite control of his pitches and has walked just 15 batters in 15 games. His breakout season perhaps shows just how coachable he is, as Oregon hired a new pitching coach — Jason Dietrich– for the 2017 season.

Michael Lananna of Baseball America wrote an interesting piece on Jason Dietrich and the impact he has made in his short stay with the team. One of the tidbits in the article discusses how Dietrich has helped Peterson improve his changeup, fix his mechanics, and build his confidence.

Below is an excerpt of how Dietrich improved Peterson’s mechanics:

“The coach and his ace have retooled his mechanics, improving his direction toward the plate, getting the left-hander to finish over his front side instead of falling off or leaking, and keeping his nose pointed toward the catcher’s glove.”

Peterson is a four-pitch lefty, that throws a fastball (88-94 MPH), a slider (the mid-80’s), a changeup (low 80’s) and a curveball (high 70’s). Before coach Dietrich came onto to scene, Peterson mostly threw a 2-seam fastball, but in the past season, he’s incorporated a 4-seamer. That might be why his fastball velocity is being reported as harder this season.

Peterson’s slider is his best secondary pitch, but as stated above his changeup is getting better, and is projected to be at least average pitch. Like his changeup, his curveball also needs to be worked on, and is thought to be a below average offering.
Lastly, he has while he has incredible control, he still needs to work on his command.

Peterson’s stock has been rising over the past month or so, but there’s still a large disparity in how he is ranked by pundits. BA has him ranked as 16th best prospect in the draft, and they seem to be one of the few sources that think he has an above-average changeup and a decent curve. MLB.com ranks him as the 31st best prospect, and Keith Law didn’t rank him, but when he did his two mock drafts, he was selected in the middle of the first round.

The Yankees were connected to Peterson in BA’s lasted mock draft, and I think fans would be happy if the Yankees were to draft him. He’d be able to move through the system quickly, and he does represent a position of need for the Yankees; other than Justus Sheffield the Yankees don’t have any front-line lefty pitching prospects. Peterson would be a good safe choice in the first round, and perhaps could be looked at as a left-handed version of James Kaprielian. Like Kaprielian, he should be able to move through the system quickly (obviously that’s if he is healthy).