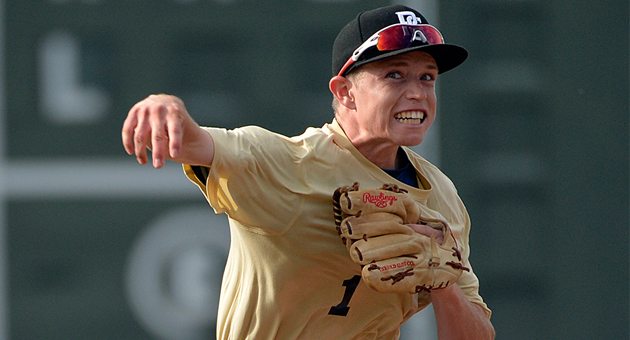 Nick Allen is a diminutive shortstop, but that shouldn’t take away from the fact he has all the tools necessary to be a first-round pick. He’s a superlative defender at shortstop who has hit throughout his prep career. This year he put up a .929 OPS, and only struck out four times in 29 games.

Allen has been attending Perfect Game events since 2012, so he’s very well known by area scouts. And by all accounts, he’s an extremely likable and competitive player.

Allen’s best tool is his glove and his speed — both of which are graded as 65 by MLB.com. He has good defensive awareness and range at short. Baseball America ranked him as the best prep defensive infielder in the draft. His arm is his next best tool and is considered the second best prep infield arm in the draft. He has recently posted a 60-yard dash time of 6.56 and had his throw-velocity measured at 94 MPH.

On offense Allen is considered extremely light in the power department — MLB.com graded his power at a 30 — but he has shown that he knows how to hit. He is a bit of a line drive hitter, who rarely strikes out. He hits a lot of ground balls to the opposite field, and with his speed he can get those types of infield hits. Then, once he’s on first base, he’s a good threat to steal. It is believed that Allen could develop to become an average hitter.

My reasoning for saying he is a first-rounder is that in the past, teams emphasized defense-first shortstops like Deven Marrero and Kyle Holder in the first round. And neither player had Allen’s speed, or arguably even his hit tool. And those were college players, so you’d expect them to be more advanced.