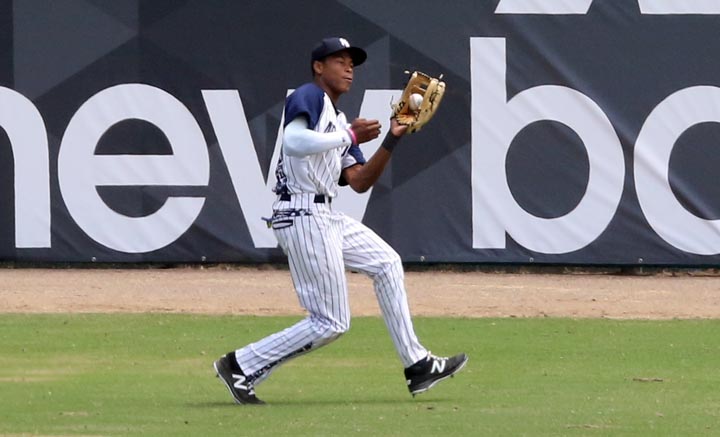 It’s rare for the Yankees, or the Mets for that matter, to have an opportunity to draft good local talent. But, this year both teams will surely have a chance to take an intriguing playing from Elmhurst, NY. Quentin Holmes is easily the best local prospect in this draft, and he might available for the Yankees in the first two rounds.

Holmes best tool is his plus-plus speed; all evaluators consider it to be an 80-tool. His entire game is built off that tool, as it’s what helps make him an above-average defender in centerfield. Baseball America ranked him as the second best outfield defender in high school.
His other tools aren’t nearly as strong, as he is believed to posses below average: arm, power, and hit tool. His arm strength isn’t a big deal because of how good his overall defense is, but he would obviously need to improve his hit and power tool to reach his ceiling as a future leadoff hitter.

Holmes is still just 17-years-old, so he has plenty of time to improve both his hit tools, and even to add some strength to his frame. It’s also important to remember that Northeast prospects don’t get the same amounts of reps or playing time as prospects from warmer regions, so it shouldn’t be that surprising that his hitting is very raw.

Holmes is ranked as the 41st best prospect by BA, the 33rd by MLB.com, and was unranked in Keith Law’s top-50 list. In recent mocks, he is shown as either a late first-rounder or has dropped down to the second round. Holmes is a local product, and is a Yankee fan, so it would certainly be nice if he fell to their second-round pick, but it doesn’t look like that will happen.