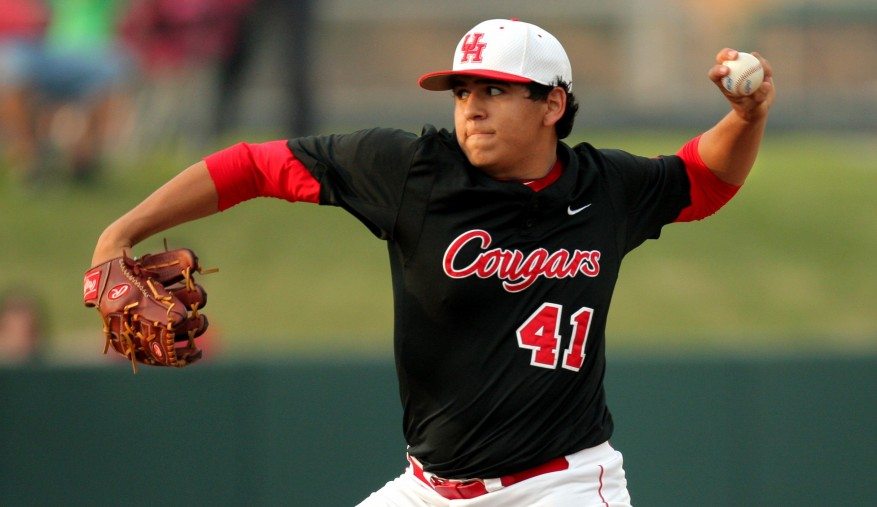 With draft about two months away, it’s as good time as any, to start to familiarize ourselves to some of the bigger named players in the draft. Today we will look at Seth Romero.
Overview:
POSITION: P
HEIGHT/WEIGHT6’3″/240
THROWS: Left
COLLEGE: Houston
HS: Columbia
HOMETOWN: West Columbia, TX USA

Background:
While it might be hard to believe today, Romero was not a top draft prospect coming out of high school in 2014. He was not ranked as a part of Baseball America’s top-500 draft prospects list and went undrafted in the 2014 draft.

Since 2014 his draft stock has risen considerably, and now he’s considered one of the best pitchers in the entire draft. Seth’s ascension started almost immediately as he had a dominant freshman season at Houston University. Romero pitched 83.1 total innings as a reliever and an occasional starter—he started eight games total—and he put an ERA of 1.94, and a WHIP of 1. He also showed impressive control (22 walks) and strikeout ability (92 Ks).

Romero’s sophomore was a bit delayed due to a suspension he received for his off-field behavior. It’s rumored that he was punished for being out of shape, and to his credit, he did lose about 20 pounds after the suspension. Romero was reinstated in early March and had a dominant season. In 94.1 innings, he posted an ERA of 2.29, a WHIP of .93, and K/BB of 113/28.

Unfortunately, Romero hasn’t had the opportunity to build off his strong 2016 season, as he handed another suspension earlier this year. He was reinstated from that suspension of May first, but has since gotten into more trouble and is now officially kicked off Houston’s baseball program.

Romero is a hard throwing lefty who has 97 MPH with his fastball and sits in the 92-95 MPH range. In addition to his fastball, he throws a slider and change; two pitches which scouts believe will be at least average major-league pitches. As of now, his slider is considered the better pitch, but his changeup is improving, and some think it could become a plus pitch. In addition to having impressive stuff, Romero has good command and control, and delivery isn’t considered to be overly taxing to his arm.

Overview:
Romero is obviously a very talented pitcher. However, there’s certainly some risk in taking him in the first round. But perhaps the Yankees are deep enough to take such a risk, after all, he is ranked highly by all pundits, and would probably be ranked even higher if he had the opportunity to pitch. As of now, he was ranked 18th best prospect by BA, and 20th by MLB.com. Picking a guy like Romero could benefit the Yankees, but it’s understandable if they pass on him, after all the team gone out of its way to draft high makeup prospects in the past.  With his recent suspension, it is very likely the Yankees will not draft Romero.