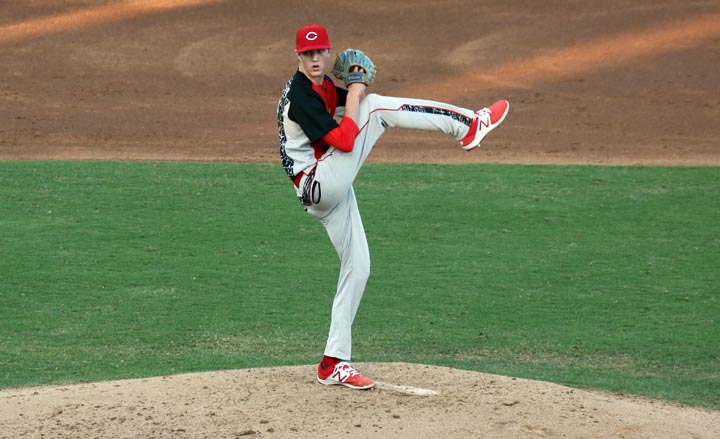 The 19-year-old New Mexico native has a very short track record of success, but his showing 2016 Area Games was enough to put him on scout’s radars. And so far, this year he has done little to hurt his stock, as he has dominated the regional competition, though to be fair he hasn’t faced tough competition.

Rogers is technically a two-way player, but only has draft value as a pitcher, and while he could go to be a two-way player in college he probably won’t because he prefers to pitch. In an interview with Baseball America, Rogers said he prefers pitching because it allows him to control the game and that he models his game after Randy Johnson because they’re both tall, lanky pitchers. So, it doesn’t seem like Rogers wants to be a hitter.

Rogers is the cousin of former big-leaguer Cody Ross and attends the same school that Ross was drafted out of. Ross was drafted in the 4th round, but his cousin should go within the first round of the draft.

Rogers is known almost exclusively for his fastball, as he reached 95 MPH at the last Area Code games. In general, the pitch sits at 89-92 MPH range but considering his size many expect him to add more velocity. Additionally, his fastball plays up due to his size; his release is much closer to the plate than most pitchers.

His breaking ball is considered to a slider, though some call it a curve, either way, the pitch is still a work in progress it looks plus when it’s working. As of now, his slider is projected by MLB.com to be an average pitch. He also has a changeup, but he’s barely ever used it, and it’s graded as a below-average pitch. Rogers has a good smooth delivery, and he has shown good strike-throwing ability.