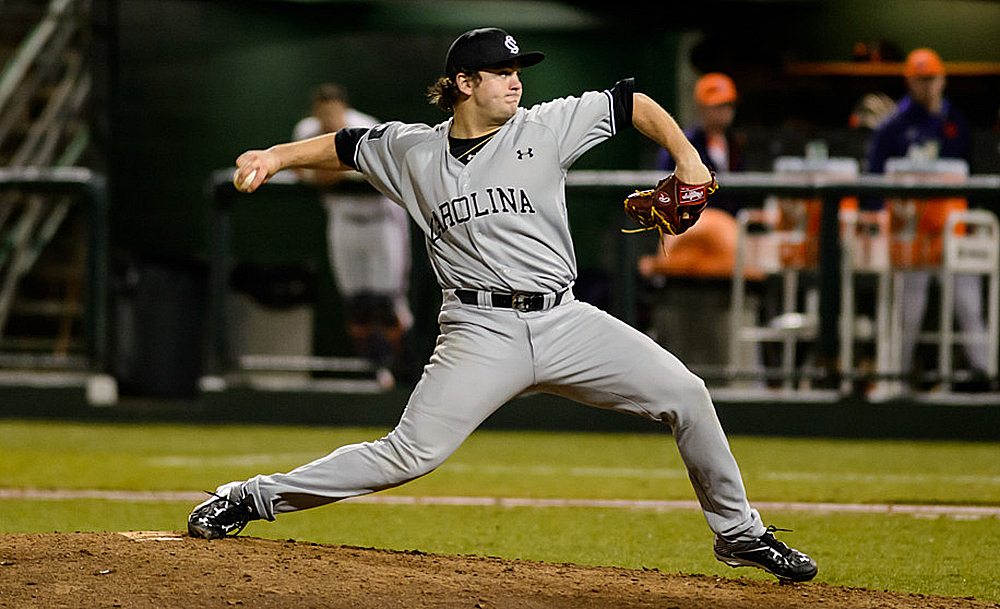 Crowe’s name should be very familiar to draft followers as 2017 is slated to be the third time that Crowe is selected. He was previously drafted by the Cleveland in 2013 and 2016. In 2013, he was ranked as Baseball America’s 141st prospect, but signability concerns allowed the Indians to select him with the 921st pick in the draft (31st round).

Instead of signing with the Indians in 2013, the Pigeon Forge (Tenn.) HS attendee elected to attend the University of Southern Carolina. Crowe posted strong numbers as a freshman; he had a 2.75 ERA, with a WHIP of 1,04, in 91.2 innings. He was throwing high-90’s and actually looked like a college ACE.

Unfortunately, his sophomore season was cut short due to Tommy John surgery, and he missed the entire 2016 season. This significantly affected his 2016 draft stock and resulted in him being ranked as BA’s 148th ranked player.

A year later Crowe has somewhat re-established himself and is slated to be taken in the first round of the draft. Recent rankings have him listed as the 19th (BA), 27th (MLB.com), and the 39th best draft prospect by Keith Law.

Crowe is primarily a four-pitch pitcher; he throws a fastball at around 95 MPH, a curveball, and a changeup. His fastball is known for its sinking movement, and his curveball and slider are his strikeout pitches. MLB.com projects Crowe’s slider and curveball as above-average offerings, and they note that his changeup has promise, but is still an inconsistent pitch for him. And while many pitchers struggle with their command coming off TJS, scouts have reported that Crowe has shown good command and control of his pitches.

In Keith Law’s top 50 list he stated that Crowe would be a top-20 pick if not for his medical history. With that said I still believe he would be a good choice for the Yankees because I think he is one of the most complete players in this draft. I also feel that he since he has already bounced back from injury—by pitching well and showing good stuff—it’s not such a big deal that he had surgery. Since this is considered a weak draft, I think it makes a lot of sense to take a guy like Crowe and maybe save some slot money for the later rounds.