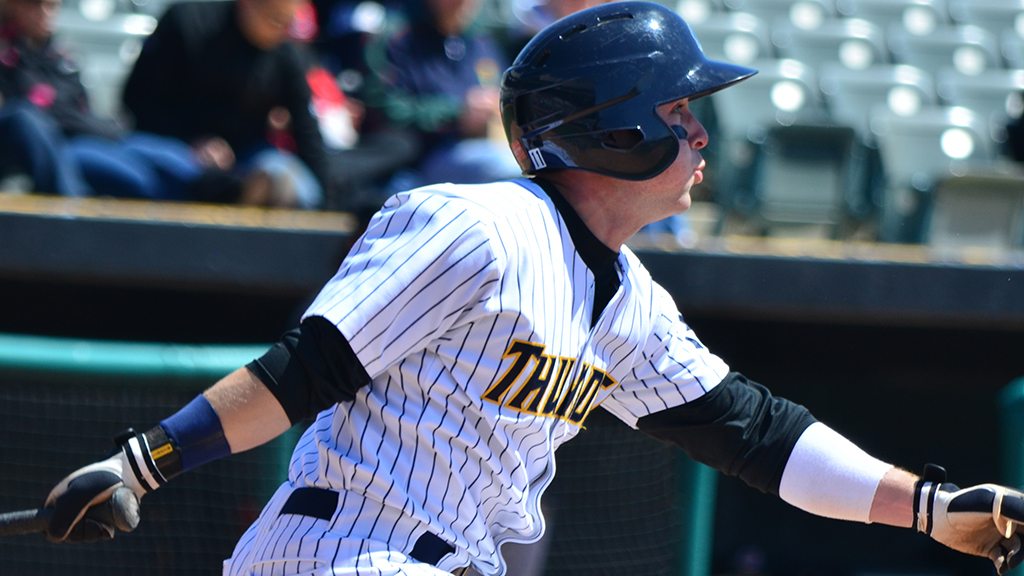 ERIE, PA – The Thunder held separate five-run leads in Friday’s ballgame, but held on for an 8-6 win over the Erie SeaWolves as the game came to a close with the winning run at the plate.

In the bottom of the 7th inning, Luis Niebla was summoned out of the Thunder bullpen to protect a 7-2 lead. He allowed all four batters he faced to reach, offering just four of his 19 pitches for strikes. Niebla was then lifted for Alex Smith who was activated off the Disabled List prior to the ballgame and was making his first appearance since May 9th. Alex Smith, Chris Smith and Cesar Vargas combined on three shutout innings out of the bullpen to protect a lead that dissolved down to 7-6 at one point when all four of Niebla’s baserunners came home to score.

The last time the Thunder bats came to Jerry Uht Park in the season’s opening series, Trenton scored 31 runs in a four-game series. The game began with them picking up right where they left off in early April. With a run in the 1st inning and two more runs in the 2nd inning, the Thunder had an early 3-0 lead from starting pitcher Brady Lail.

Lail, who would get through six innings on just 79 pitches (51 strikes), did not allow an earned runs, though a pair of errors on the infield in the 5th inning contributed to a pair of Erie runs. All told, Lail now has a 2.94 ERA with the Thunder this season-aided by a stretch where he has allowed one earned run in his last 16.1 IP (0.55 ERA).

The Thunder bats added two more runs in the 4th to extend the lead to 5-0 and even after the two unearned runs off Lail in the 5th, the Thunder offense responded immediately with two more runs in the top of the 6th inning. Taylor Dugas as the No. 2 batter in the Thunder lineup and Jose Rosario as the No. 9 hitter were a pair of bright spots in Trenton’s 13-hit night. Dugas reached base safely in four of his five plate appearances, and over his last three games has reached in 8-of-14 (.571 OBP). Rosario was 3-for-4 on the night and has 11 hits in his last 9 games to raise his season batting average nearly 40 points in that time and is now above .200 for the first time since April 29th.

The Thunder and SeaWolves continue their four-game series Saturday with a scheduled 6:35 p.m. first pitch. LHP Miguel Sulbaran (3-1, 2.80) toes the rubber for the Thunder in his first start back from Triple-A Scranton/Wilkes-Barre and he will oppose RHP Warwick Saupold (1-1, 5.14). Pre-game coverage begins at 6:20 p.m. on 91.3 FM or online at www.trentonthunder.com.