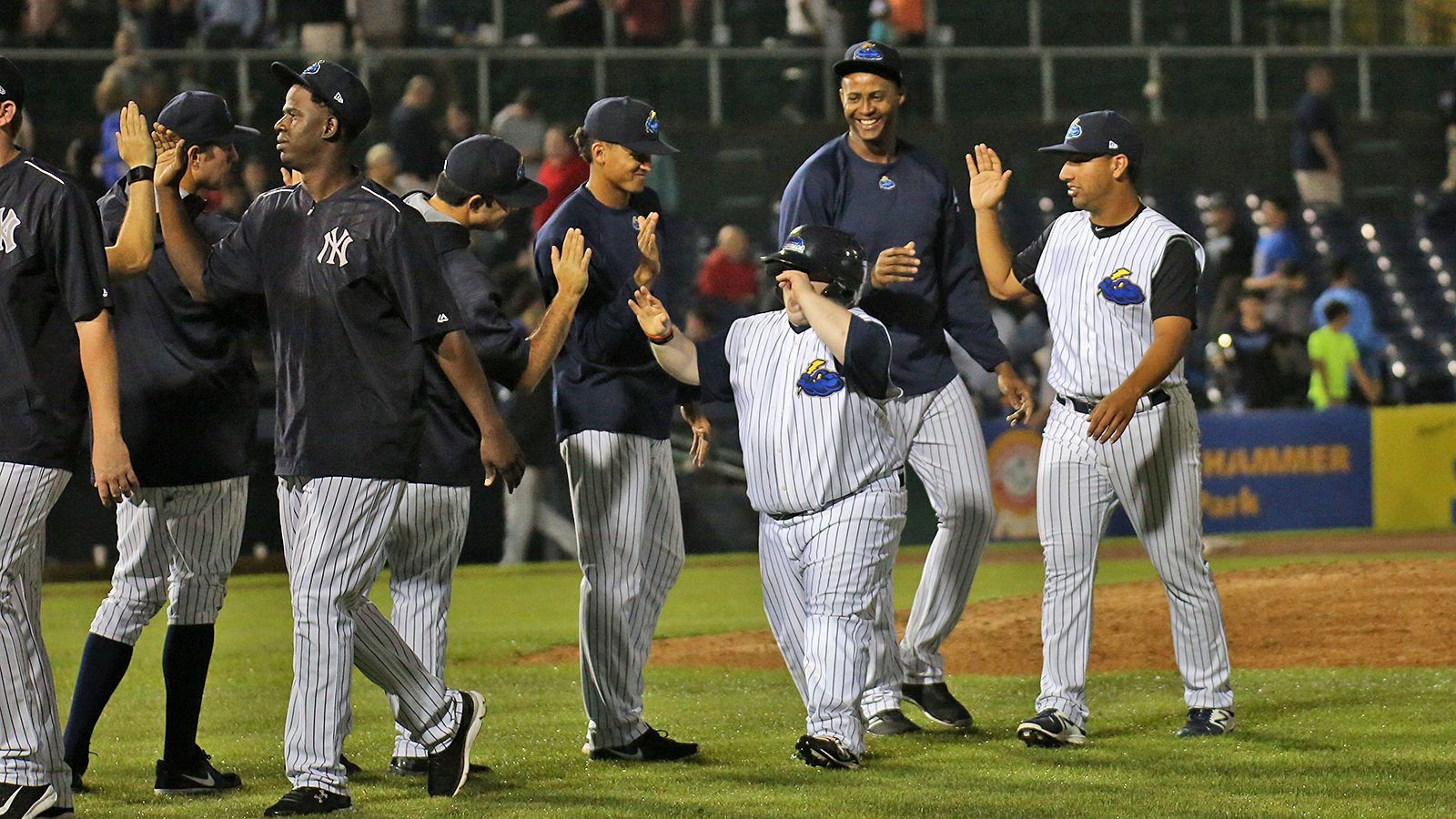 The Thunder packed their bags and boarded a chartered bus headed north to Binghamton on Tuesday afternoon where they are slated to open the postseason against the Rumble Ponies on Wednesday night in a best-of-five series. While the Thunder tied a franchise-best mark of 92 wins with their 3-2 win over Reading on Monday, they are heading into a buzzsaw in the Binghamton Rumble Ponies, who come in winners of eight straight games and nine of their last ten heading into the playoffs. 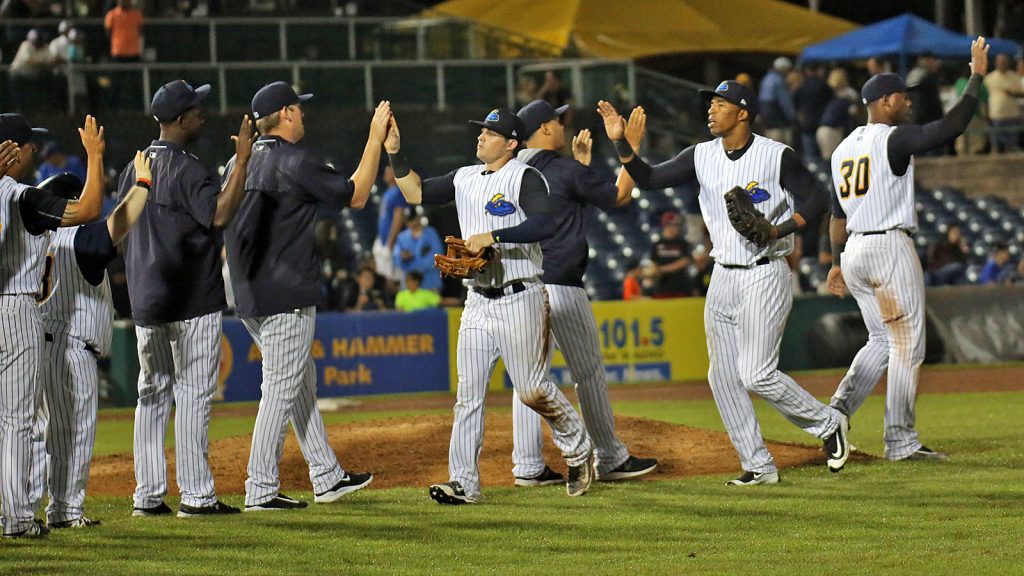 Trenton will look to advanced to their second consecutive ELCS with a series victory over Binghamton. (Martin Griff)

Despite being eastern division rivals, the two teams met in the regular season just six times; both took two-of-three on their home fields. Thunder Manager Bobby Mitchell has been impressed with the Rumble Ponies in the short sample that he has seen of them. From the early going, he had identified them as a probable opponent in the postseason.

“They present a big challenge,” said Mitchell, who was named the Eastern League Manager of the Year on Sunday.

The league’s two best teams reached this collision course due large in part to their elite pitching staffs. The Thunder led the league in team ERA (2.83), hits allowed (1057), runs allowed (442), and strikeouts (1160). Binghamton finished second in all of those categories other than strikeouts; both teams also tied in WHIP (1.23) and shutouts (20). Make no mistake about it, this series will come down to pitching.

“They are a good pitching staff,” admitted Thunder outfield Zack Zehner. “Last time we were there, they kind of shut the door on us. But, we have seen their guys before and we have played them a bunch so we are just going to stick to our game plan and stick to our approach and I think that we will be fine.” 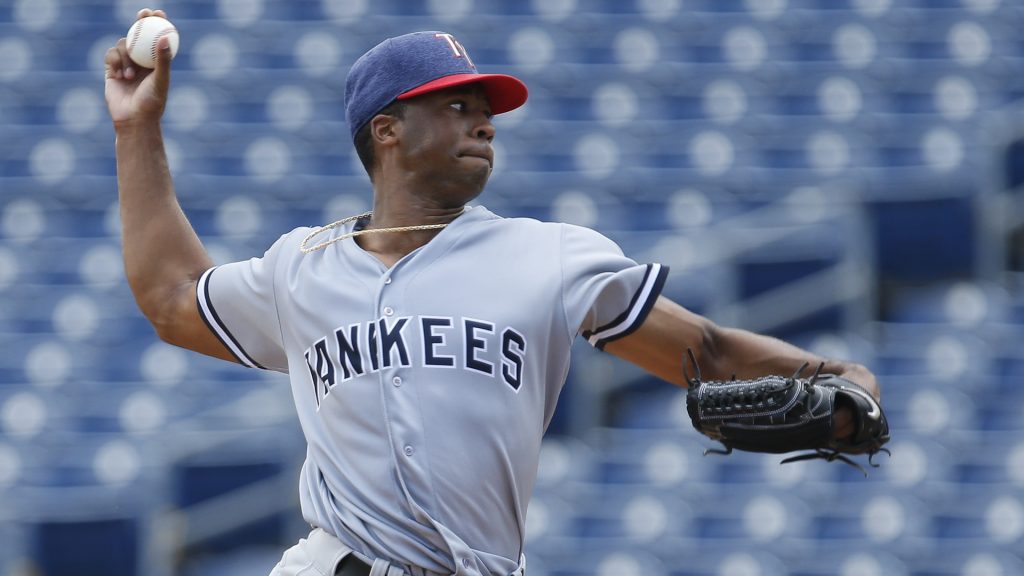 Dillon Tate, pictured here with Tampa, will take the mound for the Thunder in game 1 of the ELDS on Wednesday. (Photo by Mark LoMoglio/Yankees)

Mitchell believes in a situation like this when a team has seen so little of the other, that the opposing pitchers will have the advantage in this shortened series.

“If you play teams over and over you see all of their pitchers, unless they’re coming and going a lot,” said Mitchell. “You get familiar with them a little bit, and as a pitcher you have an advantage if the hitter hasn’t see you a lot.”

Right-hander Dillon Tate, one of the Yankees premiere pitching prospects, is slated to toe the rubber in game one despite making just four starts at the Double-A level. The laid-back and subdued Tate says that he is going to try and treat this start just like any other despite the high-stakes.

“I treat all of the games with the same importance,” said Tate. “I’m not really looking at it as added pressure or anything like that. I’m going to go out there and pitch the same way I’ve been pitching previously and just continue to learn from each outing.”

The Ponies will counter with a talented right-hander of their own in Corey Oswalt, the reigning Eastern League Pitcher of the Year. The Mets 2012 seventh-round draft selection went 12-5 with a league-best 2.28 ERA in 24 starts for the Rumble Ponies. Oswalt made two starts against the Thunder this season and they did not fair well; he was 1-0 with a 2.08 ERA in 13 innings, including a seven inning, two-hit shutout performance on August 3.

“He’s been tough throughout the league and tough on us,” said Mitchell in regards to the difficulty of facing Oswalt. “He’s a big kid and throws strikes. He commands the ball well and throws hard. We’re facing the Pitcher of the Year in the league.” 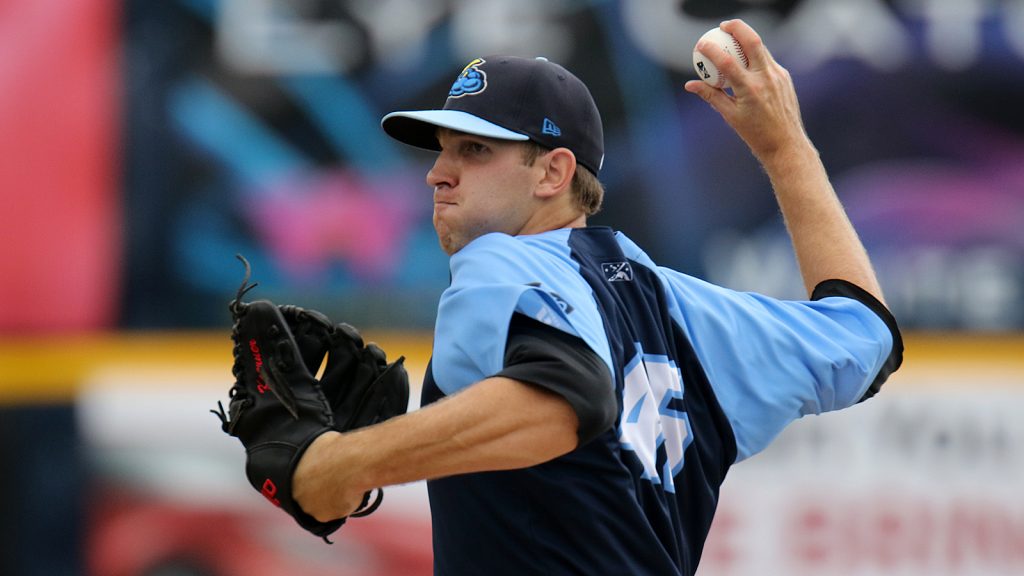 Game two will feature a match-up of right-handers in Brody Koerner and Ricky Knapp. The 23-year old Koerner is 6-3 with a 4.06 ERA in 12 starts for the Thunder. He allowed seven hits and three earned runs in six innings in his lone start against Binghamton on August 1. Knapp spent a majority of his season in Triple-A with Las Vegas where he went 7-13 with a 5.35 ERA in 25 starts in the hitter-friendly Pacific Coast League. Since joining the Rumble Ponies last month, the 25-year old has gone 1-0 with a 2.00 ERA in four starts.

In game three, southpaw Justus Sheffield is slated to make his second start since coming off of the disabled list on Sunday with an oblique injury that kept him out of action for nearly two months. In his first full-season in Double-A level, the highly-touted hurler has gone 7-6 with a 3.18 ERA in 17 starts. He will oppose Binghamton starter Marcos Molina, who is one of the better prospects in the Mets farm system. Since being promoted from St.Lucie in early June, the 22-year old righty has gone 3-7 with a 3.92 ERA in 12 starts. 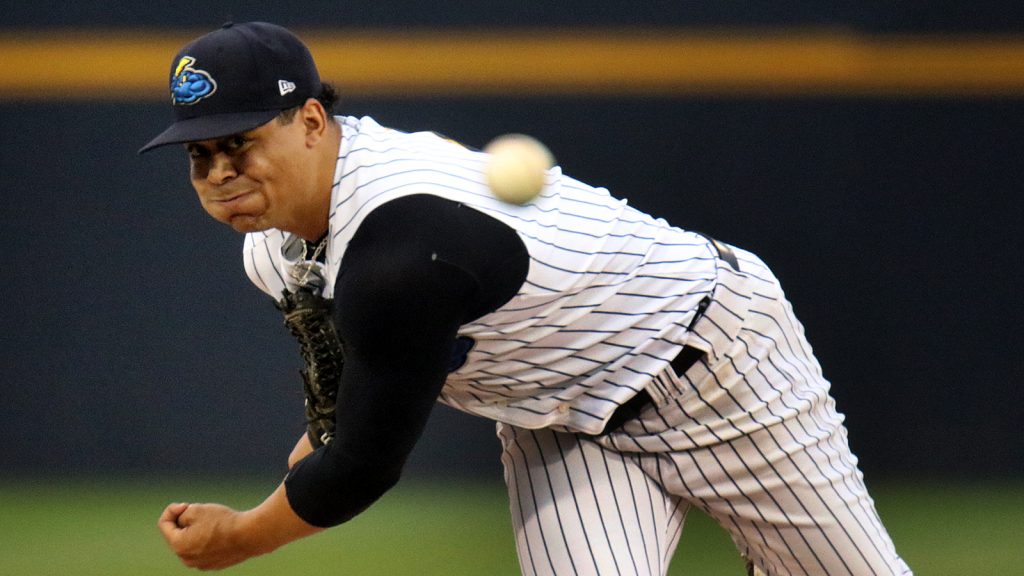 Sheffield was exposed to the postseason with Trenton late last season in his brief stint with the club and he believes that will prove  to be a huge advantage for him going into his start on Friday as the series shifts back home to ARM & HAMMER Park.

“Last year was a lot of fun,” admitted Sheffield. “I was super excited last year after coming to Double-A for the first time and then getting a chance to pitch in the playoff right off of the bat, I didn’t really know what to expect. Now coming into it, I kind of know that it is a grind and they want to win just as bad as us.”

Sheffield added, “I am going to treat it like another start, but it will definitely be in the back of my mind that we have to get it done. I am going to go out there and give it all that I have got.” 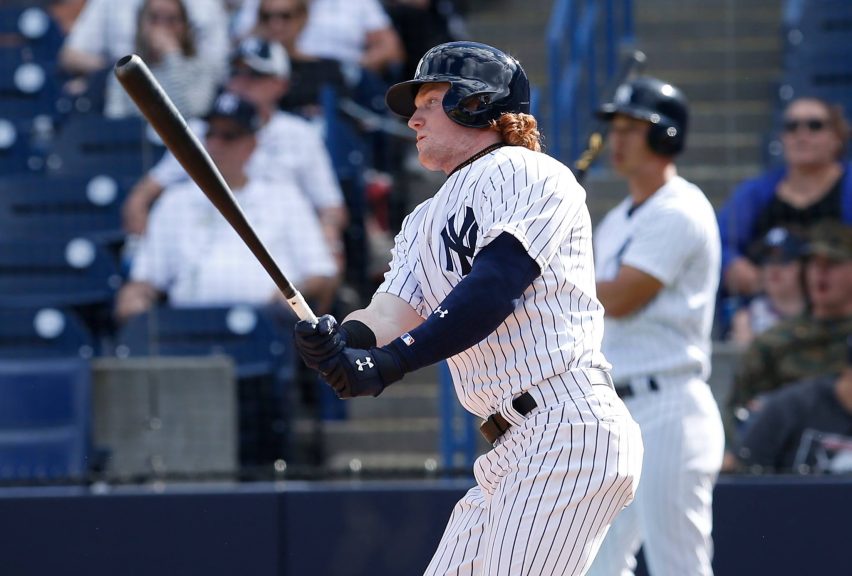 Should the series extend beyond three games, right-handers Jose Mesa Jr. and Will Carter are candidates to pitch in games four or five.

While much of the attention will be focused on the pitching match-ups, the Thunder offense will receive a huge boost heading into the ELDS. Yankees outfielder Clint Frazier and first baseman Garrett Cooper are slated to play in this crucial series as part of their major league rehabilitation assignments.

Frazier strained his left oblique on August 9 and has been out of big-league action since. The 23-year old Frazier, known as Red Thunder, was batting .243 with 18 RBI in 28 games for the Bombers prior to landing on the disabled list. Cooper has been with the Thunder for more than a week now and has gone 8-for-20 with a homer and two RBI in six games.

The team that emerges victorious in this series has a date with the winner of Altoona and Bowie, who will match-up in a five game series of their own to determine the winner of the west.

“I don’t think that we can lose two there,” said Mitchell. At least a split. That’s the goal.”

Roster moves: Since the season finale on Sunday, a slew of roster moves have taken place throughout the organization that have impacted the Thunder. Outfielder Mark Payton, first baseman Mike Ford and catcher Sharif Othman have been promoted to Triple-A while pitcher David Sosebee has been sent down to Tampa. Catcher Francisco Diaz has been sent to the Thunder from SWB while outfielder Jhalan Jackson and pitcher Taylor Widener were promoted to Trenton from Tampa.