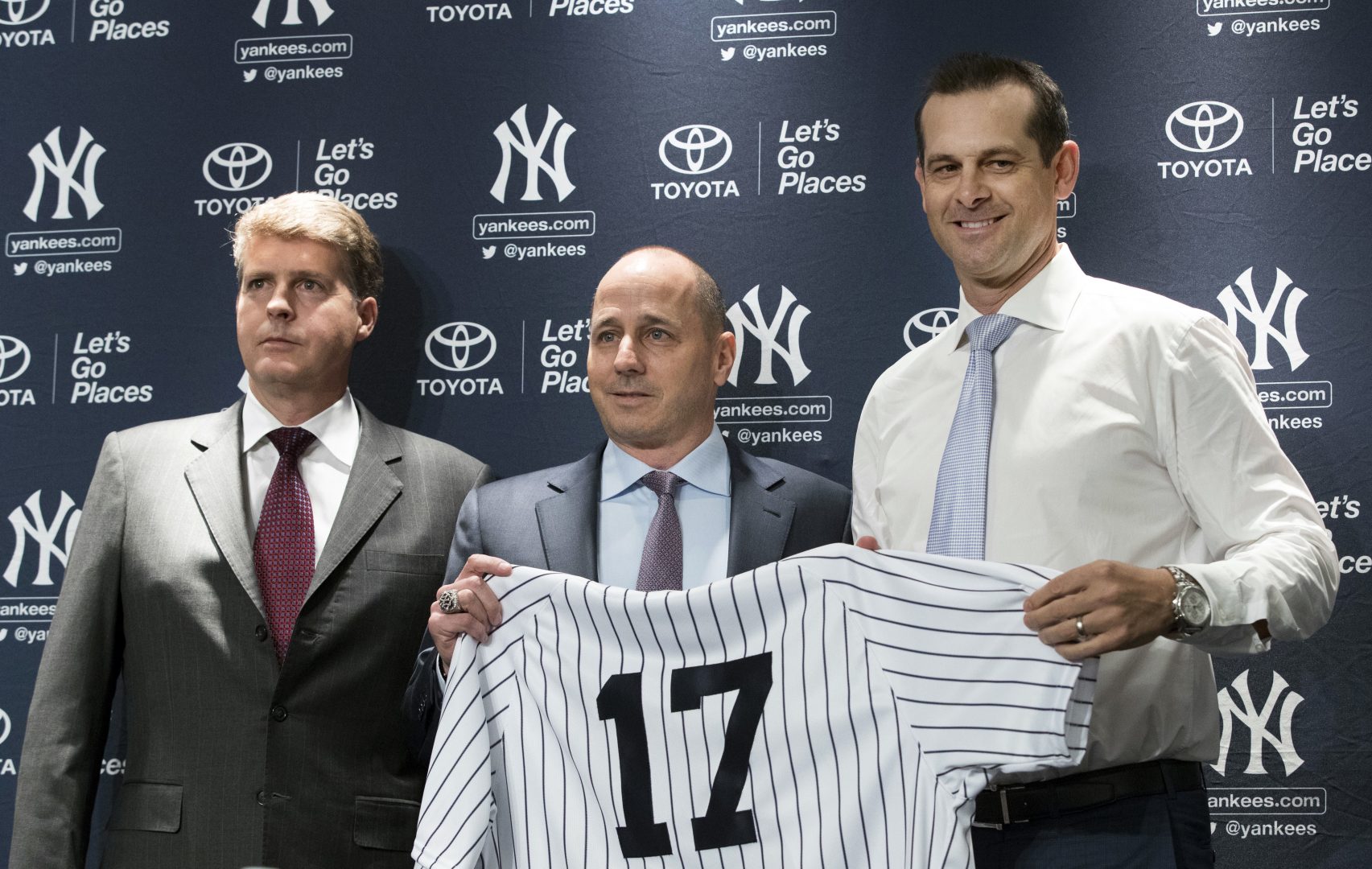 Back in October, the New York Yankees were one win away from facing the Los Angeles Dodgers in the 2017 World Series. The organization had far exceeded even its own expectations for 2017 by beating the Cleveland Indians in the American League Division Series. You wouldn’t be alone if you envisioned young rookie sensation Aaron Judge and company hoisting the World Series trophy.

Well, you might ask what has happened since then?

Veteran manager Joe Girardi was forced out of New York following a heartbreaking game 7 defeat to the Houston Astros.

Significant former major league staff members coupled with minor league coordinators, coaches and managers, have left in the form of Al Pedrique, Tom Slater, Josh Paul, Rob Thompson, and Joe Espada. All of whom have taken jobs at the Major League level and either received promotions or been named to the same position.

Last but not least, the affordable Japanese two-way free agent phenom, Shohei Ohtani, informed general manager Brian Cashman he will not be signing with the organization.

Phew, what a couple weeks! Am I right?

Don’t lose hope, excitement, or reduce expectations for the organization. It is time to embrace the unknown and trust the very intelligent, hard working front office members and the Steinbrenner family. The Yankees will prevail in this time of flux. Yankee fans can have faith in the brilliant baseball minds of Brian Cashman, Kevin Reese, Tim Naehring, and Damon Oppenheimer to the highly ranked, business-savy trio of Randy Levine, Lonn Trost, and Hal Steinbrenner.

On Wednesday, November 6, 2017 Aaron Boone was introduced as the 33rd manager in franchise history, and 18th Yankees manager to have played for the organization.

Boone comes to the Yankees with zero prior coaching experience.

Instead of looking at that, view it as a refreshingly surprising positive. As highly respected as Joe Girardi is, business as usual was simply not working for the Yankees. Things became stale and players and fans alike, frustrated.

Boone is unquestionably the man to solve this issue. At just 44-years old, Boone is more knowledgeable about the game than most credit him for. He comes from a legendary baseball family and has dedicated his entire life to this game.

During the official announcement, owner Hal Steinbrenner said, “I firmly believe that Aaron possesses the attributes needed to follow in the tradition of great Yankees managers. He continued to go on to say “From all accounts, he is a polished communicator who possesses the ability to cultivate and grow relationships. Aaron has also spent a lifetime immersed in baseball, affording him a unique and intimate understanding of what fosters team success.”

Cashman echoed similar sentiments by saying, “When we had the opportunity to speak with Aaron and share concepts and ideas, he was able to showcase a variety of traits that we believe will strongly benefit this franchise as we move forward, including an astute mind for the game and a progressive approach to evolving strategies. We also believe Aaron’s interpersonal skills and baseball pedigree will allow him to blend well with the systems we have in place, our baseball operations staff and the 25-man roster.”

Kevin Reese was named as the senior director of player development, replacing the departed Denbo.

My take? He will do an even better job than Denbo.

Reese, 39, joined the Yankees organization after playing with the Bronx Bombers from 2002-07 by serving as a professional scout in 2008 and eventually working his way up to director of professional scouting, a role previously occupied by the Los Angeles Angels of Anaheim current general manager Billy Eppler.

He is one of the brightest up and coming baseball minds in the entire industry. He knows the current Yankees prospects and big-league players as good or better than anyone else in the organization and was rewarded for it.

The Baby Bombers are still in good hands as their coaches/coordinators are stacked with talent.

Nick Ortiz, Travis Chapman, Carlos Mendoza, Reggie Willits, and Mario Garza are five huge names to remember for the future. Ortiz has a great personality and is a young modern-type of coach who really connects with players. Chapman is one of the hardest-working, analytically savy minds the Yankees currently have. Mendoza and Willits are so well liked, they both are joining the MLB coaching staff! Garza has done a tremendous job heading up the Yankees Dominican Republic Academy, at the young age of 36.

David Adams, yes the former player, is another name who could quickly climb up the ranks within the organization as he could very well be rewarded with an affiliate managerial job as early as this season.

Pat Osborn, P.J. Plittere are also names that can’t be overlooked. All of the teams that have been managed by Osborn have had a winning record and advanced to the postseason. Plittere is one of, if not the best hitting coach the Yankees have.

Then, we still have the steady veterans such as Jay Bell, Bobby Mitchell, Luis Sojo, Luis Dorante, Jody Reed, Pat McMahon and Greg Pavlick. Mix them in with the younger coaches and you have one of the most trusted minor league coaching staffs in all of baseball.

Fear not, embrace the unknown. Championships will be won, parades will be scheduled, rings will be earned.