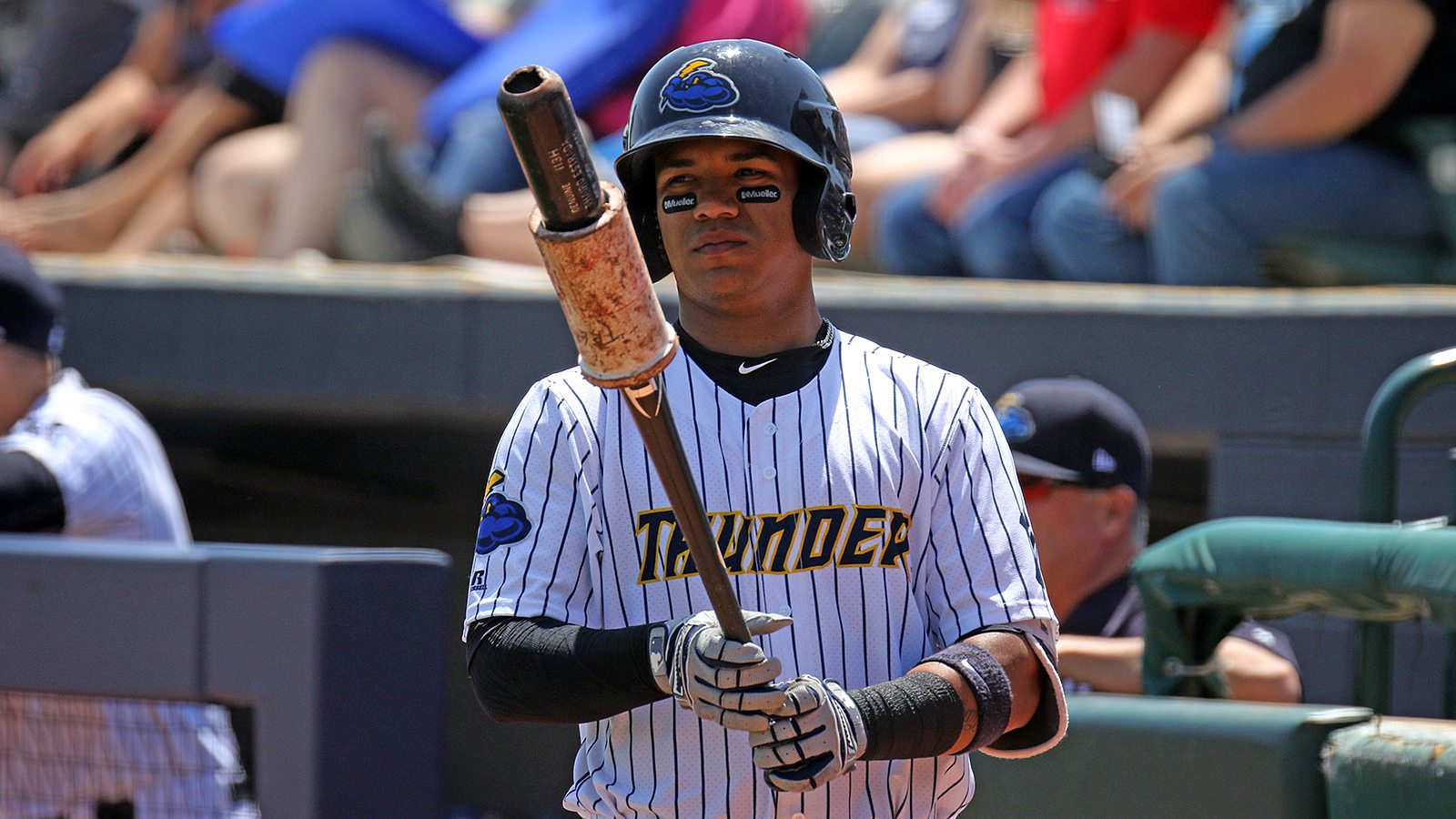 TRENTON – The Thunder (32-17) and the Binghamton Rumble Ponies (28-17) were holders of the two best records in the Eastern League and a mere two games separated the clubs in the division as the rivals opened a three game series at ARM & HAMMER Park on Tuesday night. 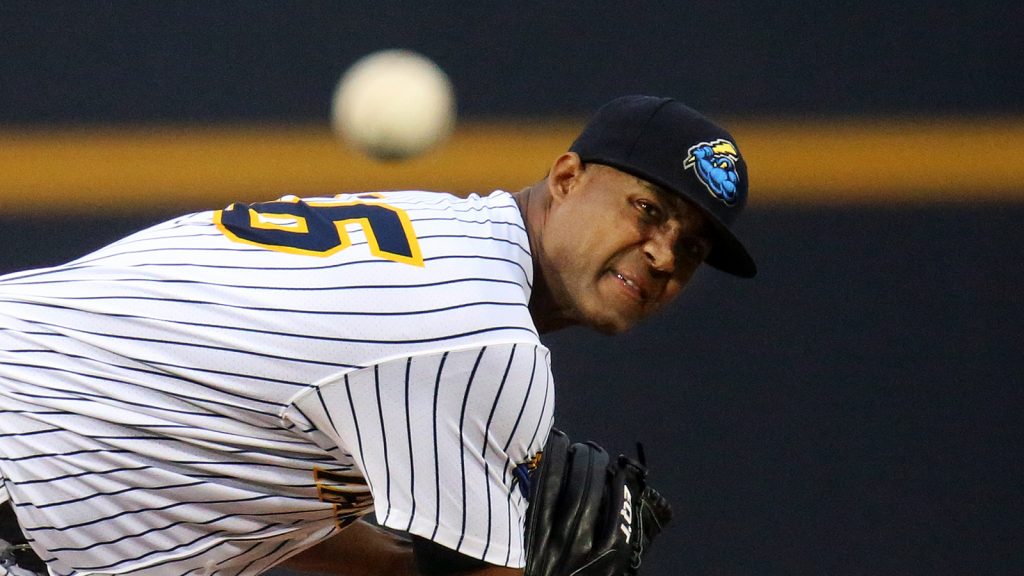 Trenton Thunder’s Domingo Acevedo against the Binghamton Rumble Ponies in Trenton on Tuesday, May 30, 2017. (Martin Griff)

In what figures to be a heated postseason race that could drag into the dog days of summer, round one of this match-up went to the Thunder in classic comeback fashion.

“We are playing a very veteran group,” said Thunder Manager Bobby Mitchell. “They are a very experienced group so this is a big test for us in that way.”

After throwing almost exclusively fastballs early on, Acevedo mixed in his secondary pitches well and was able to keep the Ponies off balance in the middle innings. Scouts had his fastball clocked between 94-97 MPH with the breaking ball at 86 MPH and the change-up between 83-84 MPH.

“I felt comfortable with my fastball today,” said Acevedo through the translation of pitcher Nester Cortes. “I was commanding both sides of the plate with it, but my plan is to attack with my fastball and get ahead of hitters. I have had good success attacking hitters with my fastball so I am not going to change that.” 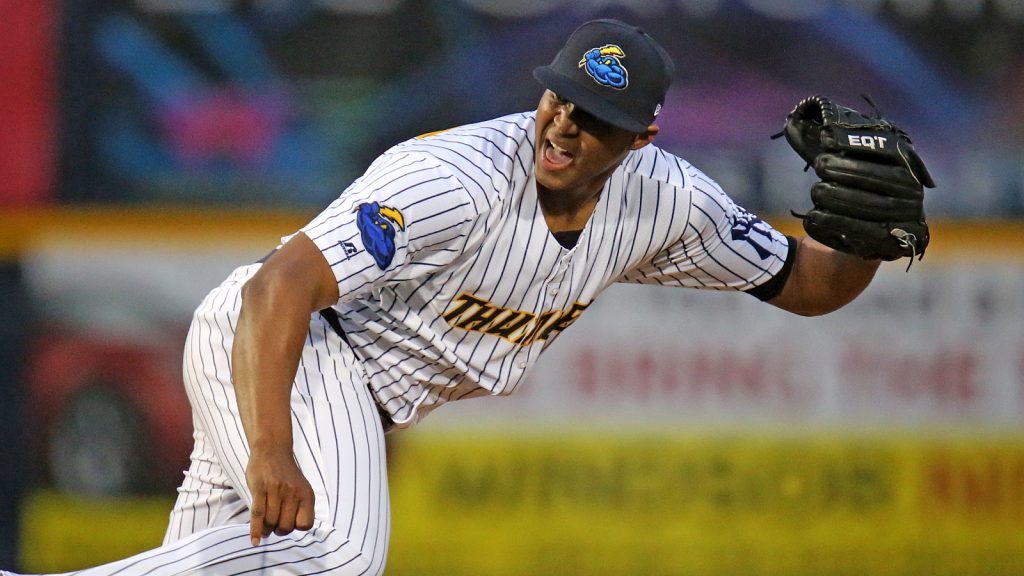 Trenton Thunder’s Domingo Acevedo against the Binghamton Rumble Ponies in Trenton on Tuesday, May 30, 2017. (Martin Griff)

Acevedo ran into trouble after a one out single by shortstop Luis Gillorme and a well-struck double from right fielder Kevin Kaczmarski put two runners in scoring position for Binghamton to start the sixth inning. An RBI groundout by catcher Tomas Nido allowed the Ponies to take a 1-0 lead and end Acevedo’s scoreless innings streak at 19. Acevedo would continue to labor before surrendering an RBI double to designated hitter Cody Decker and an RBI single to left fielder Kevin Taylor to fall behind 3-0.

“I got in trouble in one inning,” said Acevedo. “I went back to the basics of what led me through all of those scoreless innings and tried to make things simple to get back on track.”

With little gas remaining in the tank, Mitchell pulled Acevedo at the 92 pitch mark. He surrendered three earned runs in 5 2/3 innings; he allowed eight hits and fanned five batters. Right hander Matt Wotherspoon came on in relief and fired an 1 1/3 of scoreless ball to keep Trenton within striking distance. 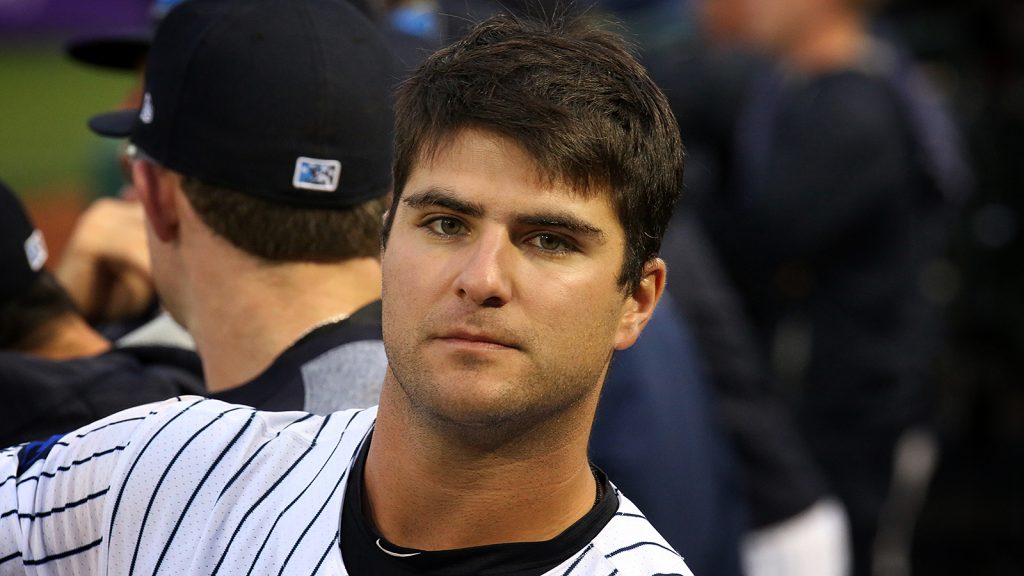 Trenton Thunder’s Mike Ford against the Binghamton Rumble Ponies in Trenton on Tuesday, May 30, 2017. (Martin Griff)

Meanwhile, Hand cruised through seven scoreless innings and came back out for the eighth inning and looked like he was going to cruise into the ninth. The righty retired the first two batters of the frame before right fielder Mark Payton lined a two out single into centerfield. Binghamton Manager Luis Rojas quickly popped out from the dugout and gave Hand the hook at the 94-pitch mark.

Binghamton reliever Tim Peterson was rudely greeted with a double from third baseman Miguel Andujar to put two runners in scoring position for designated hitter Mike Ford, who rifled a two-RBI single up the middle to put Trenton within one run at 3-2. Rashad Crawford dropped in a game-tying RBI single to knot action at three run a piece.

“We did a lot of things right at the end,” admitted Mitchell. “We came up with some big hits with the hits by Andujar and Ford in that inning.” 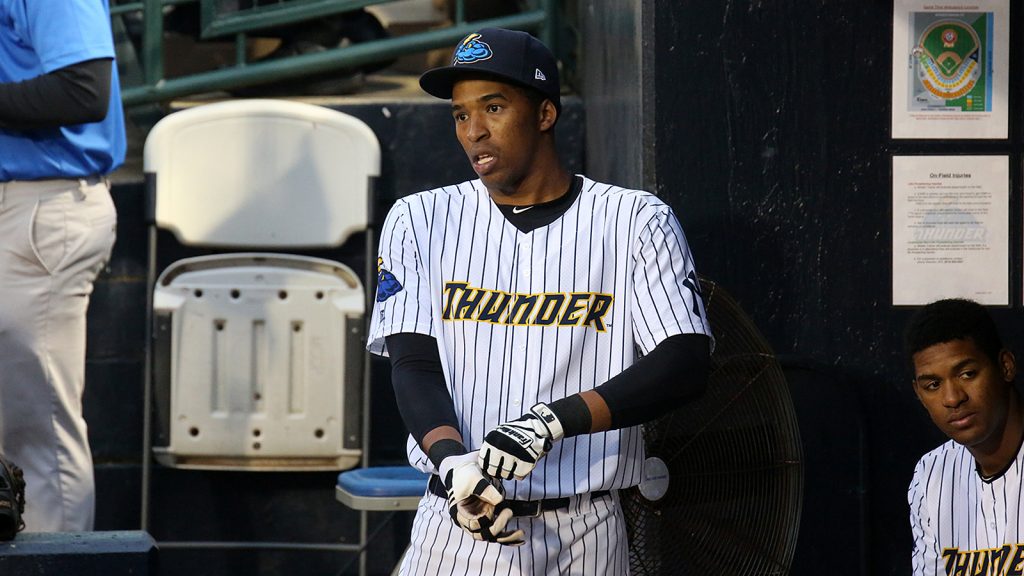 Trenton Thunder’s Rashad Crawford against the Binghamton Rumble Ponies in Trenton on Tuesday, May 30, 2017. (Martin Griff)

After Cale Coshow fired two innings of scoreless relief, Trenton came to bat in the bottom of the ninth hoping to walk-off as winners. Second baseman Abiatal Avelino dropped down a leadoff bunt and advanced all the way to second base when first baseman Matt Oberste failed to catch the ball cleanly. A sacrifice bunt by catcher Francisco Diaz advanced Avelino to third base before second baseman Thairo Estrada singled into centerfield to give Trenton the 4-3 victory.

“Avelino did a fantastic job; great bunt,” said Mitchell. “He has been working on that a lot, he has used that a number of times now.”

Notes: Following the game, reliever J.P. Feyereisen was informed that he was being promoted to Triple-A. Mitchell said that pitcher Eric Ruth would be added to the roster.