Examining the Current State of the 25-Man Roster 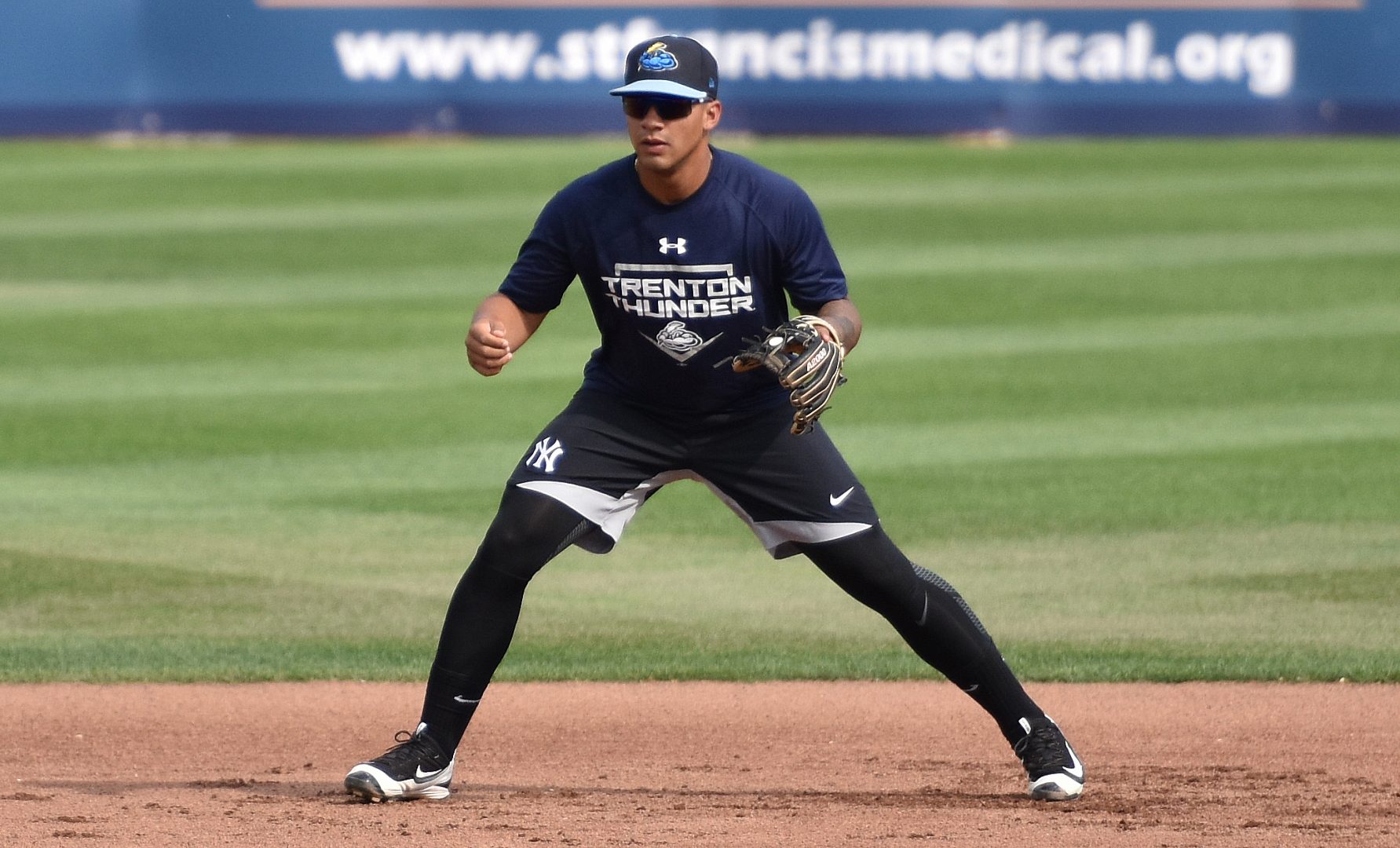 The Yankees are gearing up for a run at another World Series championship in 2018.  Currently, the team is set to have one of the most formidable lineups and bullpens in all of baseball.  Without question, the Bronx Bombers will have a lot of expectations to live up to when they take the field.  With that in mind, let’s take a look at the current state of the Yankees 25-man roster.

In just his second full season in the major leagues, Gary Sanchez will be the Yankees backstop in 2018.

The Dominican Republic native has received some criticism for his defense after leading the league in past balls and errors in 2017. Despite those miscues, he possesses the third best throwing arm in the bigs, and his average pop-time was ranked 10th at 2.08 seconds according to Statcast. This may come as a shock to some, but FanGraphs rated his defensive value at + 8.6 runs above replacement.

Overall, look for Gary to further improve his defense and cut down on the miscues and be incredibly productive at the plate. Yankee fans, you have your catcher of the future. Now sit back, relax, and enjoy this unique young talent lead his team, and pitching staff to a second consecutive playoff berth.

There is no question that Greg Bird has if not one of, the highest upsides of any first basemen in Major League Baseball.

There is a serious question of if he can stay healthy, as he has played in just 94 big league games over the last three seasons.

At just 25-years old, Bird will be handed the starting role at first for the Bronx Bombers this season. If he can make it through a full-season, expect the 6’4” left-handed hitter to play gold glove caliber defense in the field and be incredibly productive at the plate.

If the injury bug bites again, plan b might be in the form of Tyler Austin and Billy McKinney.

As it stands now, there will be an incredible battle for the 2018 Opening Day starting role at second for the Yankees. The candidate list currently includes Gleyber Torres, Tyler Wade, Thairo Estrada, Ronald Torreyes, and now Jace Peterson.

Torres is the Yankees number one prospect and is currently ranked as the third-best prospect in all of baseball by Baseball America. After undergoing season-ending Tommy John Surgery last year, he is healthy and ready to compete for a crack at the 25-man roster. This kid is going to be a staple in the Bronx for years to come, its just a question of when does Brian Cashman, Aaron Boone, and company entrust him with the job.

Wade made his major league debut in 2017 and struggled mightily over 30 games. He hit just .155 in 58 at-bats and looked overmatched at the dish. Make no mistake about it; this was not the speedy Tyler Wade that you are going to know. He is incredibly talented, versatile, and mature. These three characteristics will make him a viable option for the Yankees to choose as their Opening Day starter.

Estrada is the dark-horse of the group, as he is a lesser-known highly ranked prospect in the Yankees farm system. The Venezuelan native slashed an impressive .301/.353/.392 this past season with six homers, 19 doubles, and 49 RBI in 122 games. He plays excellent defense and should give the other candidates a run for their money.

Torreyes is the frontrunner entering Spring Training as the starter at the keystone position for New York to begin the season. He impressed at the plate hitting .292 in 315 at-bats in 2017. The hard-working, versatile, and playful Torreyes has earned the admiration of his teammates and become a very valuable off the bench role player for the Yanks.

Peterson was just signed to a minor league deal yesterday afternoon. The 27-year old will get a shot to play his way into the Yankees infield rotation out of Spring Training. Peterson, a once highly regarded prospect, comes with at least two more seasons of club control after being let go by the Atlanta Braves earlier this off-season. He slashed just .215/.318/.317 last season with the Braves across 215 plate appearances.

In summary, Torres will claim the job at some point in 2018. Should Cashman, Boone, and Co deem that he should need more seasoning in the minors to start the season at Scranton/Wilkes-Barre (Triple-A), look for Torreyes to lock down the job.

Since taking over for Derek Jeter in 2015, Gregorius has come into his own. He has led the Yankees on and off the field and just been an all-around stud. Didi will enter 2018 as one of the Yankees Opening Day starters for the Yankees for a fourth consecutive season.

Your guess is as good as mine right now. Will the Yankees sign Yunel Escobar? Eduardo Nunez? Todd Frazier? Or will they entrust a youngster such as Miguel Andujar, Gleyber Torres or Tyler Wade?

After the Yankees traded away Chase Headley to San Diego in December, Andujar seems like the frontrunner to land the position. The 22-year old has worked very hard on his defense, and it has steadily improved every season over the last three years. The Dominican Republic native can also flat-out rake. He batted .315 with 16 home runs, and 82 RBI in 125 games for the Trenton Thunder (Double-A) and Scranton/Wilkes-Barre RailRiders (Triple-A).

Brett Gardner will assume the starting left field role again in 2018. The Holy Hill, South Carolina native is a leader on and off the field and has quickly become one of the fan favorites in the Bronx. Known for his hustle, grit, and competitiveness the fast-footed lefty should see some time in center field with the offseason addition of Giancarlo Stanton.

The Yankees unofficially announced that Aaron Hicks would become 2018 regular in center during the postseason in 2017. Former manager Joe Girardi played Hicks over Jacoby Ellsbury, and the move paid dividends. Expect the switch-hitting San Pedro, California native to get the bulk of the playing time in center field this season.

Write it in bold, the New York Yankees will have a monster, physically imposing, and baseball crushing power hitter playing right field this season. That will either come in the form of 2017 National League Most Valuable Player Giancarlo Stanton, or 2017 American League Rookie of the Year Aaron Judge. Expect the dynamic duo to split time in right with Judge receiving more of the playing time.

The DH spot will be a revolving door between Gary Sanchez, Giancarlo Stanton, Aaron Judge, and Aaron Hicks, however, expect Stanton to get the majority of the at-bats in this spot.

As it currently stands only two bench players seem to be locked in for 2018. They are Jacoby Ellsbury and Austin Romine.

Ellsbury has quickly become the most expensive fifth outfielder in MLB history, as he is set to earn $21,142,857 next season according to Cot’s Baseball. The contract has limited what the Yankees can do this offseason with ownership’s strong desire to get underneath the $197M luxury tax threshold. Even though there is no possible way to live up to his contract, Jacoby can still be a valuable piece coming off the bench for his new manager.

Romine is going to be Sanchez’s backup to begin the season. Should Higashioka have good health through the first few months of this season, he could spell Romine and take his position on the 25-man roster. Higashioka will make less money and is a far superior defender with a much higher offensive upside.

Tyler Wade, Ronald Torreyes, Clint Frazier, Jabari Blash, Billy McKinney, Tyler Austin, Thairo Estrada and Kyle Higashioka are the other members on the 40-man roster that have at least some sort of chance at a 25-man roster spot.

Torreyes is a for sure lock if he isn’t a starter with Wade having an edge above all the others due to his versatility and speed.

There has been some talk of acquiring a controllable starter like Michael Fulmer from the Detroit Tigers, Gerrit Cole from the Pittsburgh Pirates, Chris Archer from the Tampa Bay Rays, Danny Duffy from the Kansas City Royals, or signing a free agent like Yu Darvish or Alex Cobb. It’s not going to happen due to the high asking prices and lack of salary space due to ownership’s self-implicated fiscal restraints.

As it stands, Luis Severino, Masahiro Tanaka, CC Sabathia, Sonny Gray are locks for four out of the five spots in the rotation.

The final spot is projected to either go to the frontrunner Jordan Montgomery, Luis Cessa, or Chad Green.

What we know is the bullpen is going to be a strength of this club no matter what way you look at it. The pen’ is deep in numbers and is flooded with talented arms.

Aroldis Chapman will be the closer, David Robertson will set him up and then either Dellin Betances or Tommy Khanle will pitch the seventh.

Adam Warren will most likely be the long-man and Chasen Shreve, the lefty specialist.

The seventh and final bullpen spot will go to one of the losers of the starting rotation battle.