The annual Rule 5 draft is a chance for prospects to get a new start with a different organization and quite possibly get a chance to make their major league debut.  This series we will take a look a select few Yankees prospects that are eligible for the 2018 Rule 5 draft look at reasons why they could be protected, selected, or left alone.

Trenton Thunder’s Erik Swanson works against the Harrisburg Senators in Trenton on Friday, May 4, 2018. (Photo by Martin Griff)

The Yankees acquired right-handed pitcher Erik Swanson on August 1, 2016, in a trade with the Texas Rangers.  Swanson came over to New York along with Nick Green and Dillon Tate in exchange for Carlos Beltran.

He was initially drafted by Texas in the eighth round of the 2014 draft out of Iowa Western Community.  After signing with the Rangers, he made his professional debut with the Spokane Indians of the Northwest League.  In 15 relief appearances with Spokane, he owned a 1-2 record with a 4.63 ERA and 24 strikeouts in 23 1/3 innings.

In 2015 Swanson had a brief 1-game appearance in the Triple-A Pacific Coast League with the Round Rock Express, striking out two batters in an inning before reporting to the Frisco RoughRiders for a game.  There he walked 2 and struck out one while allowing a run on two hits for the Rangers Double-A affiliate and on June 21 he would head to the Hickory Crawdads where he would spend most the season.

With the Crawdads Swanson appeared in 7 games, striking out ten batters in 12 1/3 innings but his season would end after suffering a forearm flexor strain.  He would return later in the year for a one-game rehab stint with the Arizona League Rangers but by then the season was just about over. 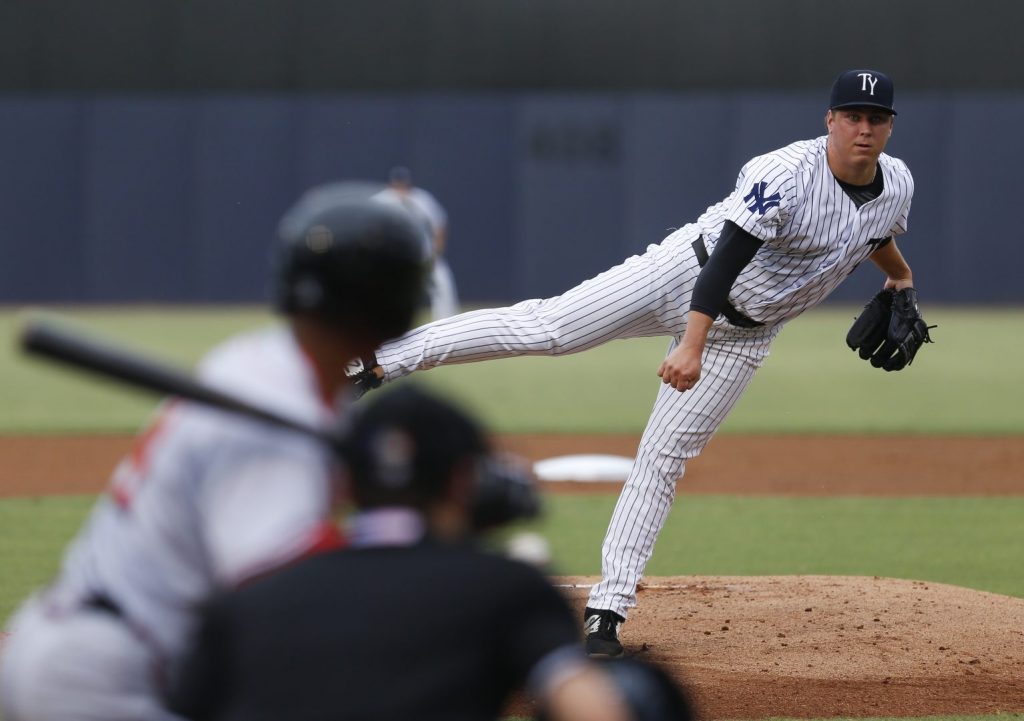 After being traded to the Yankees, he reported to the Charleston RiverDogs.  In 5 games for the RiverDogs, he threw 15 innings, striking out 15 and allowed just six earned runs.  Overall, he had a 6-5 record with a 3.46 ERA in 24 games, 17 starts between the two teams.

The 2017 season was Swanson’s first full season as a member of the Yankees organization; he spent the entire season with the Tampa Yankees of the Florida State League where he was a mainstay in their rotation.  In 20 starts he earned a 7-3 record with a 3.95 ERA and struck out 84 batters in 100 1/3 innings pitched.

Erik Swanson opened the 2018 season with the Trenton Thunder, his first time in Double-A since his cameo in 2015 for Frisco.  He would appear in only eight games, seven starts, for the Thunder amassing a 5-0 record with a microscopic 0.42 ERA in 42 2/3 innings pitched and struck out 55 batters.

On May 21, he was promoted to Triple-A where he would spend the majority of the season.  Before going on the disabled list with a groin injury on June 14, Swanson struggled in Triple-A with a 5.11 ERA in 34 2/3 innings over five games.  After returning from injury he pitched much better, earning a 2-1 record with a 3.21 ERA in nine games and striking out 49 in 47 2/3 innings pitched.

Why Should He Be Protected?

Like Rosa, Swanson is likely to make his major league debut at some point during the 2019 season.  The only question is if it would come as a spot starter or as a bullpen arm.  Stuff-wise his fastball has primarily been 92-94 miles per hour with the Yankees, with a good slider and a changeup that is coming around.

If left exposed again this season, there is a good chance a team would take a flyer on him as a potential bullpen arm.  Long-term scouts predict Swanson is destined for the bullpen and he could become a valuable, low-cost part of that bullpen ala Chad Green.

Swanson has the potential to become a back-end weapon in the bullpen if given a chance, someone that in a year or two could fill a vital role in shutting down games for the Yankees.

Why Should He Be Left Exposed?

This will be the second time that Swanson is eligible for the annual Rule 5 draft and after being left exposed last year he was not selected.  This season he is closer to the big leagues than he ever was and has made great strides but is still low on the depth chart in the Yankees system.

If the Yankees were to need a spot starter that could turn to several pitchers already on the 40-man roster including Jonathan Loaisiga, Domingo German, Chance Adams, and Justus Sheffield.  Combine that with guys like Michael King that jumped up the organizational depth chart to become an MLB-candidate for 2019 and does not need to be added just yet.

Advertisement. Scroll to continue reading.
In this article:Erik Swanson