Kyle Higashioka was added to the Yankees 40-man roster on Friday.

The New York Yankees have one of the best minor league systems in all of baseball.  The number of top prospects in the organization rivals all other teams.  Beyond that, the depth of talent on the farm in the most impressive collection of young players that the Yankees have had in my lifetime.  As we prepare for the start of spring training, let’s take a look at this depth, position by position.  We will examine the organization from top to bottom.

Let’s start out with the catchers.  The Yankees have a long history of elite catchers.  The lineage started with Bill Dickey and continued with Yogi Berra, to Elston Howard, to Thurman Munson, right through to Jorge Posada.  After Posada retired following the 2011 season, the team expected the next great catcher to be in the organization.  There were several up and comers including Francisco Cervelli, Jesus Montero, JR Murphy, Austin Romine, and a teenage Gary Sanchez.

When none of the players emerged as stars within a couple of years, the Yankees signed free agent Brian McCann to a five year/ $85 Million contract.  He was a veteran leader with All-Star skills.   He was serviceable, but not the superstar the team thought it was getting.  Towards the middle of 2016, the Yankees promoted 22-year-old Gary Sanchez as part of their youth movement.

All Sanchez did in his 225 at bats is hit 32 extra base hits, including 20 home runs, with an OPS of 1.033.  One word: Historic.  The way he hit got the imagination of Yankees’ fans wondering what he could do over a full season.  While the expectations are going to be unrealistic, could he hit 25 home runs and drive in 85 RBIs?  That would be better than what any of the 2016 all star catchers were able to accomplish.  The Yankees obviously think that he can, because, in the offseason, they traded away his safety net, Brian McCann, to the Houston Astros.

This leaves Romine as the teams’ only other experienced major league catcher on the 40-man roster.  He emerged last year as a capable backup catcher, able to provide occasional offense when called upon.  In 2017, his major role will be to provide solid defense, while giving Sanchez a breather to DH or come out late in games.

Kyle Higashioka had a breakout season in2016.  The 26-year-old split the season between the AA Trenton Thunder and AAA Scranton/Wilkes-Barre Rail Riders.  He combined to launch 21 home runs and knock in 81 RBIs.  The emergence of a genuine power hitting the catcher in the upper minor leagues prompted the Yankees to add him to the 40-man roster.  He figures to start the season in Scranton, but could conceivably push Romine.

During the winter meetings, last month, the Yankees lost Luis Torrens in the Rule 5 Draft.  He ended up on the San Diego Padres.  If the 20-year-old doesn’t stick in the major leagues all season, he will be returned to the Yankees and hopefully continue to develop into a top prospect.  In the AAA version of the draft, the Yankees selected Jorge Saez from the Toronto Blue Jays.  He is listed on the RailRiders roster, where he would back up for Higashioka. 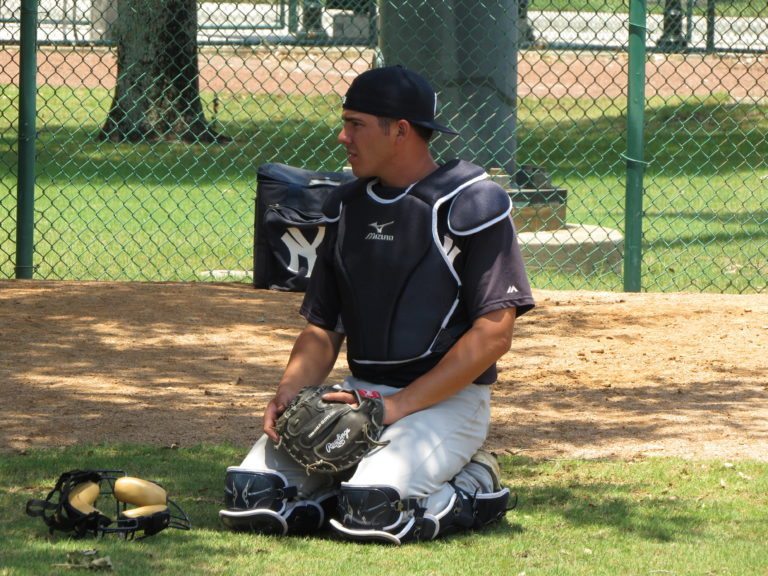 Donny Sands working out at catcher at the Yankees complex. (Bryan Green)

Donny Sands is a 20-year-old converted third baseman that is just learning how to be a catcher.  He spent most of 2016 getting familiar with the defensive aspects of being a catcher, but his offense did not suffer.  He will likely start the year at extended spring training before rejoining rookie-level Pulaski.  A promotion could follow shortly after that. 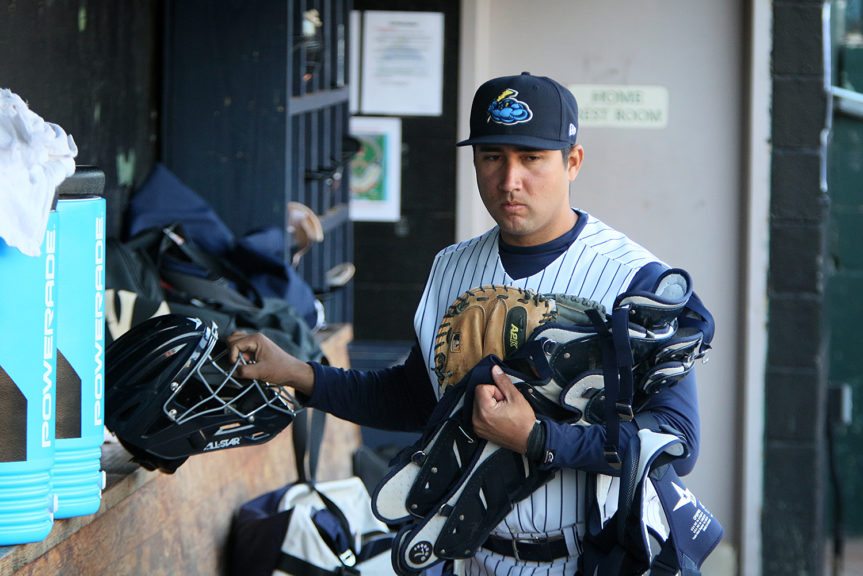 Trenton Thunder catcher Francisco Diaz in the dugout before a game against the Portland Sea Dogs at ARM & HAMMER Park in Trenton on Wednesday, April 13, 2016. (Photo by Martin Griff)

According to team websites, Francisco Diaz is listed on the Trenton roster.  Jesus Aparicio and Wes Wilson will be in Tampa.  The Charleston River Dogs have Audie Afenir.  The Staten Island Yankees are currently showing Radley Haddad, Eduardo Navas, Jerry Seitz, and Keith Skinner all on the team.

The Yankees have had a history of successfully developing quality major league catchers.  Only time will tell if any of these players will be included amongst the past greats.  One thing that is evident is that the Yankees believe that Gary Sanchez is capable and they have cleared the way for the position to be in his hands for a very long time to come.