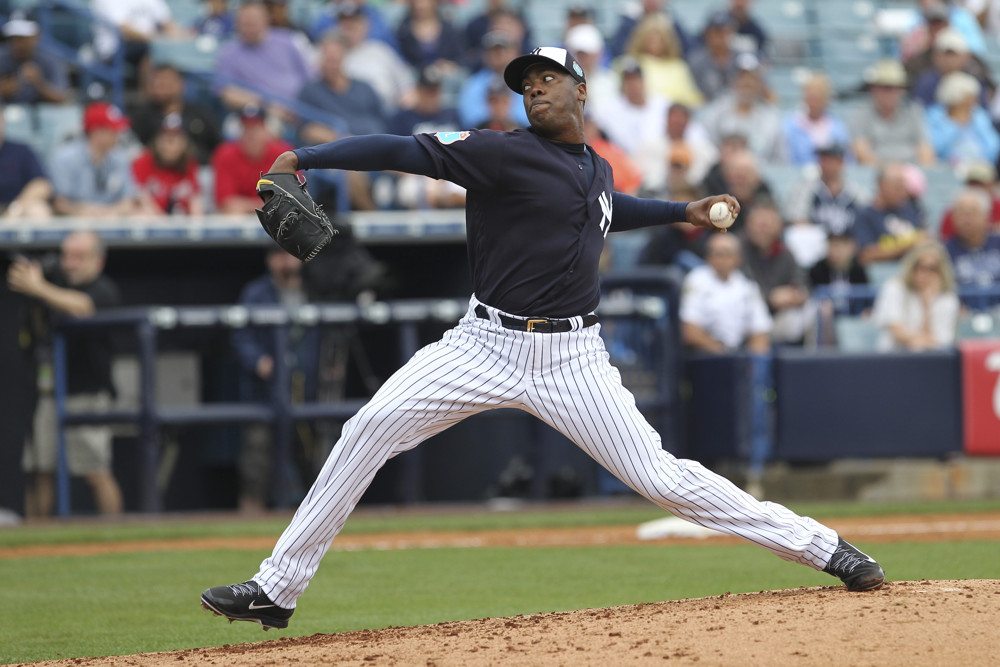 The New York Yankees have one of the best minor league systems in all of baseball. The number of top prospects in the organization rivals all other teams. Beyond that, the depth of talent on the farm in the most impressive collection of young players that the Yankees have had in my lifetime. As we prepare for the start of spring training, let’s look at this depth, position by position. We will examine the organization from top to bottom, focusing on each player’s primary position.

Throughout MLB history there has been a fascination with pitchers able to throw the baseball remarkably hard. Pitchers like Walter Johnson, Bob Gibson, and Nolan Ryan became legends due to their extraordinary ability. Without the technology of today, it was up to the imagination of fans as to just how was they could hurl a fastball.

Today, with the advanced analytics and radar guns on nearly every scoreboard, each pitch is tracked and carefully monitored. In the past 15 years, the average speed of a major-league fastball has increased from 89 MPH to well over 92 MPH. Power arms are all the rage. Teams look for players able to throw extremely hard and then look to harness the raw ability and develop it into a dominant pitcher.

No team has embraced this concept quite like the New York Yankees have. In the past seven months alone, the Yankees have acquired five pitchers that Baseball America and Cheat Sheet have verified to have thrown pitches that have reached triple digits. Added to the arms already in the stable, and in total, the organization has a dozen players that achieved this milestone last year.

Aroldis Chapman signed with the Yankees as a free agent this past December. Previously, the left-hander has served as the closer for the Cincinnati Reds and the New York Yankees, before being traded to the Chicago Cubs for top prospect Gleyber Torres, on his way to leading the Cubs to their first World Series championship in 108 years. Chapman’s average fastball last year clocked in at an astonishing 100.9 MPH. Before his trade in July, the Cuban native threw a pitch more than 105 MPH, tying the record he had set during his time in Cincinnati. MLB.com offers a “Chapman Filter” to their stats as he threw 49 out of the top 50 fastest pitches last year.

The Yankees inked the soon to be 29-year old Chapman to a 5-year deal. Yankees’ owner Hal Steinbrenner acknowledged that the energy and excitement that the controversial closer brings with him resonates throughout the Stadium and its fans. For his career, Chapman has averaged striking out 15.2 batters per 9 innings. The Yankees will look for Chapman to continue his dominance at the tail end of the bullpen.

Setting up for Chapman will be Brooklyn native Dellin Betances. In his three seasons since becoming a regular in Manager Joe Girardi’s bullpen, Betances has been an All-Star each year. His average velocity of 98.1 MPH for his fastball ranked 6th best in MLB. He used this weapon to average well over 14 strikeouts per 9 innings pitched. The right-hander will be the main bridge from the starter to the closer once again in 2017. 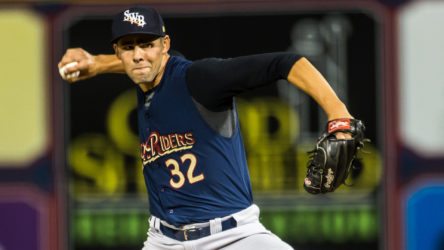 Ben Heller is a 25-year old right-handed pitcher. The Yankees acquired the reliever in last season’s deadline deal that sent Andrew Miller to the Cleveland Indians. He made his Major-League debut last August. Pinstriped Prospects ranked the fireballer as the team’s 49th best prospect coming into this season. He is on the 40-man roster and will be in the mix for a big-league job, likely spending time in both Scranton and the Bronx this year.

The Yankees acquired Domingo German along with Eovaldi from the Miami Marlins for Martin Prado and David Phelps in December of 2014. German missed the entire 2015 season but returned in 2016, throwing heat as a starter. The 24-year old native of the Dominican Republic has added to the 40-man roster this offseason. However, the right-hander has yet to throw a pitch above Hi-A Tampa. Pinstriped Prospects ranks German as the 47th best prospect in the Yankees system. Figure on him starting the year in Tampa again as he looks to increase upon the 49.2 innings he threw last year.

Domingo Acevedo signed with the New York Yankees as an international free agent from the Dominican Republic in 2012. The right-hander will turn 23 during spring training. He spent last year between Charleston and Tampa, amassing 93 innings as a starter. In what is considered one of baseball’s best farm systems, Acevedo is ranked by Pinstriped Prospects as the number 9 prospect. Look for him to return to Tampa to start 2017, with an early season promotion likely. Acevedo is Rule 5 eligible after the season. 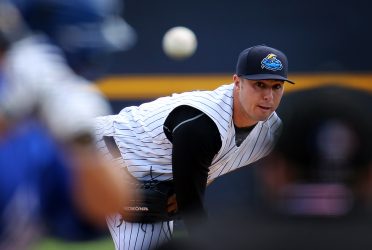 J.P. Feyereisen works in relief for the first time for the Trenton Thunder during a game against the Hartford Yard Goats at ARM & HAMMER Park in Trenton on Wednesday, August 3, 2016. The Yankees acquired the right-hander from the Cleveland Indians as part of a deal for Andrew Miller. (Photo by Martin Griff.)

J.P. Feyereisen was acquired by the Yankees in last summer’s trade deadline deal of Andrew Miller to the Cleveland Indians. Since being drafted in 2014, the 24-year old right-handed reliever has been dominant, yielding only a 1.61 ERA in 123 professional innings while striking out 158, or 11.56 per 9 innings. Feyereisen was invited to spring training as a non-roster invitee. He will likely start the season in Scranton. He will be Rule 5 eligible at the end of the season, so expect him to be promoted to the Bronx as the need arises this year.

Dillon Tate was selected by the Texas Rangers number 4 overall in the first round of the 2015 MLB amateur draft. Baseball America ranked him as the number 69 prospect in the sport a year ago, yet for some reason, he was included in last summer’s trade deadline deal that sent Carlos Beltran from the New York Yankees to the Rangers. Tate spent the end of last year working on his mechanics from out of the bullpen, restoring his velocity and confidence. Pinstriped Prospects ranks Tate has the organization’s number 15 prospect. Look for the 22-year to return to the starting rotation, likely beginning the year in Tampa.

21-year old Dominican Republic native Jorge Guzman was signed as an international free agent by the Houston Astros in 2014. Last year he started in the Gulf Coast League and advanced to the Appalachian Rookie League where he combined to throw 40 innings and strike out 54 in 13 games (8 starts). During the offseason, he was packaged, along with Albert Abreu, to the Yankees in exchange for Brian McCann. He will likely begin the year as a starter for the Charleston River Dogs. 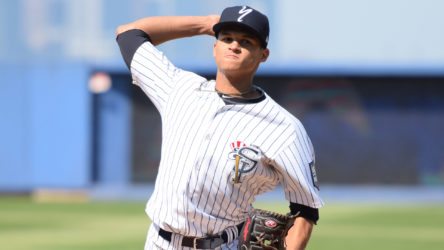 Anyelo Gomez signed with the New York Yankees as an international free agent from the Dominican Republic in 2012. The right-hander will turn 24 during spring training. Last season he increased his innings pitched to 97 while splitting time between Staten Island and Charleston. He has spent most of his minor-league career as a starter. Gomez will also likely end up in Tampa’s rotation to start the season.

Freicer Perez is part of the heralded Yankees’ international free agent class of 2014. The right-hander has pitched a total of 122 innings during his two seasons as a pro, striking out 117 batters with a 3.76 ERA. Pinstriped Prospects has him rated as the team’s 27th best prospect. He will turn 21 during spring training. Perez finished last year in Staten Island. A promotion to Charleston to start the year should be in his future, where he will be in the rotation.

Daris Vargas was signed as an international free agent out of the Dominican Republic by the Texas Rangers in 2012. He was released by the Rangers that summer and the Yankees signed him during the following offseason. The 24-year old starter spent last year pitching 131.1 innings for Charleston with a 2.95 ERA. His next step should also be to advance to Tampa.

The youngest of the Yankees’ fireballers is 17-year old Luis Medina. He signed with the team as an international free agent in 2015. The Dominican Republic-native only pitched sparingly last year, totaling just 4.2 innings in three starts due to injury. He will increase his innings this year, probably again in the Dominican Summer League. As he matures physically, it is likely he will add velocity to his already lively right arm.

The Yankees have a slew of top prospects that everyone already knows about. This group of pitchers will be spread throughout the system, with the physical ability to light up a radar gun and making others take notice. With no less than a dozen pitchers in the organization topping out at over 100 MPH, the Yankees will look to continue their recent history of having the most electric arms in the league on their team.