The Yankees have one of the best systems in all of baseball. In this installment of our series, we will look at recent Yankees first-round picks.

The MLB June amateur draft is how teams stock their minor-league farm systems with talent.  They hope to develop their selections into bona fide major-leaguers.  It is a guessing game as to whether the 18-year-old selected will progress into a player capable of succeeding at the top level by the time they turn 24.

Scouting departments do their best to make educated guesses so that their team can advance their picks into cheaper alternatives than the available big-league free agents.  A mistake with an early round draft pick can set a team back years.

Draft order is based on the previous year’s standings, in reverse order.  So, the worst team gets the first pick and vice versa.  Usually, any given year has about 10-12 picks considered to be future all-stars.  This means that the Yankees have consistently selected second-tier because of the great success they have had at the big-league level.

In fact, since drafting Jeter sixth overall in 1992, the Yankees have only had one pick in the top 15.

GM Brian Cashman has made several shrewd decisions regarding the roster over the last several years.  Through a variety of moves, he has managed to acquire several first-round picks.  This has coincided with the Yankees having a system that has risen through the rankings with a bullet, as Top 40 DJs used to talk about hit records..

CC Sabathia was selected by the Cleveland Indians with the 20th pick in the 1998 draft.  As a member of the Indians, he led them to the playoffs three times and won a Cy Young award.  In 2008, he was traded to the Milwaukee Brewers, where he scoffed when his impending free agency would have been jeopardized, as the workhorse demanded the ball, often on short rest.

He parlayed that into what turned to be a nine-year agreement with the Yankees, for over $200 million.  That investment resulted in a 2009 World Series championship and several playoff appearances.  Now, as the team’s elder statesman, he is looking to duplicate or improve on his 2016 performance.

Jacoby Ellsbury was taken by the Boston Red Sox with the 23rd pick of the 2003 draft.  He won two World Series with them before signing a lucrative seven-year deal with the Yankees after the 2013 season.  He has yet to produce up to the standards of such a deal, but with four years remaining on his contract, the Yankees are hoping that he can return his production level to that of his days in Boston.

The Yankees would have to pay a large chunk of Ellsbury’s  contract if they were ever to try to trade him to make room for their up-and-coming players.

The Minnesota Twins drafted Aaron Hicks with the 14th pick in the 2008 draft.  Viewed by many as a supreme athlete, his skills have yet to translate on the diamond.  The Yankees acquired him in exchange for John Murphy following the 2015 season.  He is competing for the Yankees’ fourth outfield spot this spring.

Cashman traded Carlos Beltran to the Texas Rangers last summer for a package headlined by 2015 No. 4 overall pick, Dillon Tate.  A knee injury and change in mechanics last year resulted in diminished velocity.  This caused the Rangers to give up on him for a half-year rental.

After the trade, he began to show glimpses of the pitcher Baseball America said could once reach 100 mph.  He enters 2017 as Pinstriped Prospects’ No. 13 Yankees prospect.  His stock may rise quickly with a strong season.

Clint Frazier was another Indians first-round pick, taken No. 5 overall in 2013.  The Indians expected him to be a future star in their outfield.  However, he was needed as the centerpiece of the package used to entice the Yankees to trade Andrew Miller to the American League Champions, who also have another elite outfield prospect in Brad Zimmer.

A Top 50 prospect (No. 24 by MILB Pipeline), Frazier will begin the year in Scranton and may be on the verge of advancing to the majors this summer.

The Yankees chose James Kaprielian with the 16th pick of the 2015 draft.  The UCLA product was in the fast lane to advancing quickly.  That is until a right elbow problem ended his year prematurely last spring.  The Yankees are starting him off slowly this spring, as he has an innings limit.  He is ranked as a top 100 prospect (No. 58 by MILB Pipeline).

Blake Rutherford was considered by many to be a top 10 talent heading into last year’s draft.  However, there were questions about whether he would sign a contract or enroll in college.  This allowed him to drop to the 18th spot, where the Yankees swooped in and grabbed him.  Ranked as the organization’s No. 3 prospect, Rutherford dominated Pulaski last year and should be in full-season ball this year, patrolling center field.  He also is a top 50 prospect, ranked No. 37 in MILB Pipeline’s Top 100.

Billy McKinney was the Oakland Athletics first-round pick in 2013.  The No. 24 pick was sent to the Chicago Cubs as part of the Jeff Samardzija trade.  He was repackaged along with Gleyber Torres and sent packing to the Yankees in the deal that sent Aroldis Chapman and the World Series to the Cubs.  McKinney ranks as the Yankees’ 28th best prospect and will likely start back in Trenton. Recovery from a broken right kneecap suffered a few years ago, limited him last season. 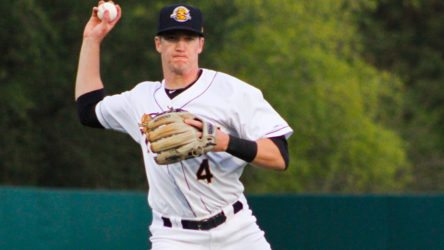 Kyle Holder was the compensation pick that the Yankees received when David Robertson was allowed to leave and sign with the Chicago White Sox.  At the time, that decision was questioned by some, but his replacement was Andrew Miller.  Miller’s time in New York, as well as his trade to the Indians, worked out well.  Holder was the 30th pick in the 2015 draft, and the shortstop has already climbed to the 26th ranked Yankee prospect.  He should start 2017 in Tampa.

Justus Sheffield was the Cleveland Indians’ first-round pick in 2014, going 31st overall.  He also came over in last summer’s blockbuster trade that sent Andrew Miller from the Yankees to the Indians.  The left-handed starter is another top 100 prospect – No. 79 on MILB Pipeline’s list. He will likely start the season as part of an impressive rotation in Trenton. The Yankees’ No. 6 prospect, Sheffield needs to show what he can do at the Double-A level, having made just two Trenton starts last season.

The Indians continue to be a theme as the Yankees received the 32nd overall pick in the 2013 draft as compensation for the Indians signing free agent Nick Swisher.  The Yankees used that pick on Aaron Judge, who has developed into a Top 100 prospect – No. 45 on MILB Pipeline’s list.

The team’s No. 7  prospect will shed that status status early in the season, as he is expected to be the starting right fielder.  Throughout his career, he has routinely gotten off to slow starts after getting promoted and has proven he can adapt and succeed at every level.  We will soon know if this rings true at the highest level.

Rafael Soriano started a still-active streak, in 2012, of five straight years that the Yankees have had a different save leader.  With Mariano Rivera returning from injury, he signed with the Washington Nationals as a free agent, providing the Yankees with another compensation pick in the 2013 draft.

With the 33rd pick, the club chose Ian Clarkin.  The left-handed pitcher has been plagued by injuries throughout his young career.  He has shown enough promise to rank 16th on the Yankees prospect list.  He pitched all last year in Tampa and will compete to try and crack the talented Trenton rotation in 2017.

The 2011 first-round and subsequent supplemental picks totaled the first 60 players selected.  The Yankees picked Dante Bichette with the 51st selection, compensation for Javier Vazquez signing with the Florida Marlins.  The 24-year-old spent last year in Trenton and has struggled with inconsistency at the plate.

First-round picks are players with elite talent.  That’s not a guarantee that they will become stars, but means they have shown a lot of promise at a young age.

The Yankees have a system with a lot of top-level talent, including several first-round picks.  Cashman will look to continue the string of success at this year’s draft.  On June 12, the first day of the draft, the Yankees will make their selection with the 17th overall pick.