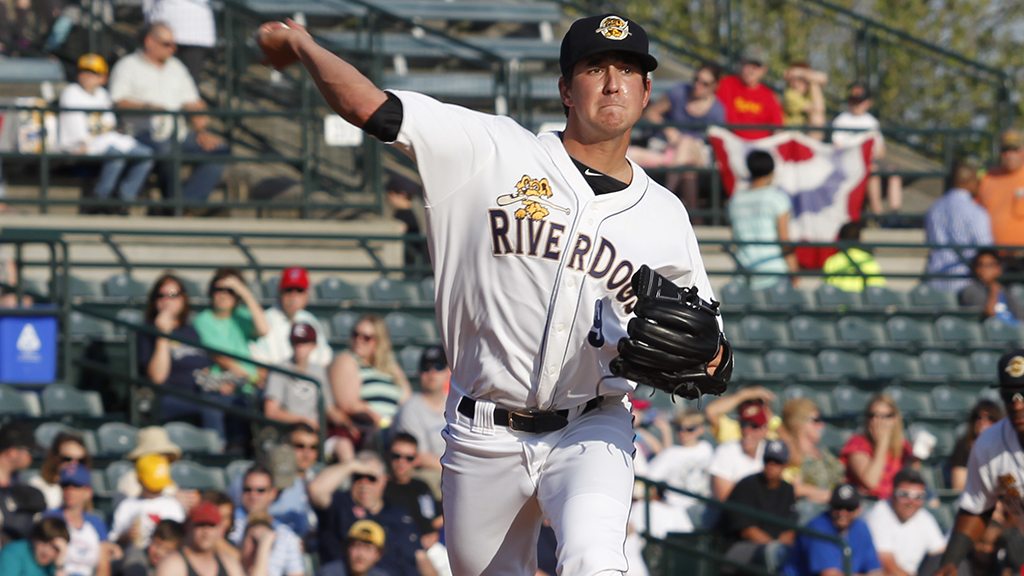 In 2012 the New York Yankees drafted right-handed pitcher Brady Lail in the 18th round of the First-Year Player Draft. Lail was drafted out of high school and promptly made his professional debut with the Gulf Coast Yankees. We had the chance to talk with Brady about his development in the Yankees organization.

Thank you Brady for agreeing to do this interview.
“Absolutely no problem to do this at all”

You split the 2014 season between the Charleston RiverDogs and Tampa Yankees. What was the experience like for? What were the differences/similarities between the two levels?
“You know the experience for the Charleston Riverdogs was so much fun! I finally got a sniff of what pro ball was like! The fans were unbelievable, the staff was great, and the team was so much fun to be a part of! The Tampa Yankees were the exact same way! Both of the teams were a great experience and most important, they both made me want more, I couldn’t thank them enough for the great opportunities!”

Prior to 2014 you had just two games of experience above Rookie-ball. How did that experience help you in your first full season in A-ball?
“The experiences I had prior to this season, helped me so much in two ways. One to be mature, and two to realize what kind of pitcher I was/am.”

On August 19th you had six no-hit innings for the Tampa Yankees against the Brevard County Manatees, what was that like for you? When did you realize that you did not allow a hit? How was your stuff that day?
“The no hit through six, was such a great accomplishment, but I can’t take all the credit! Kyle Higashioka called a great game. And my defense behind me made some great plays to save my butt!! And I realized I had a no-no going in the sixth! I walked a guy with two outs, and I had two strikes on the next batter. For some reason I just wouldn’t look at the scoreboard, so I asked the base umpire what the count was. He said it is 0-2 just don’t look at the scoreboard haha! So I just finished my business and walked in the dugout and everybody congratulated me!

And you know my stuff was good that day, not the best but it was good! I was able to command the inside and outside part of the zone with my fastball and I was able to throw an off speed pitch for strikes! My best pitch the curveball wasn’t the best that day. So I relied more on my sinker change up!”

What was the major focus for you this year? What was the main thing you and the coaches worked on during the season?
“My main focus this year was to stay healthy! To prove that I can last those full seasons! The things I worked on most with the coaches was making sure I separated on time with my delivery! Sometimes I got too anxious to deliver the next pitch that my arm wasn’t able to catch up! So my mind set late in the year was simply “separate”.”

What is your focus for the off season? What changes are you looking to make for next season?
“My offseason goals are to get stronger, stronger, and stronger! But with getting stronger comes the ability to stay healthy!! So heathy and strength!

And I don’t believe I need to make too many changes for this next season! I’m just excited and anxious to get another year under my belt!”

In an interview last year you mentioned that you were working on a sinker to complement your fastball, changeup and curveball. How has that pitch developed over the last year?
“My sinker this year definitely played a big part in my sequences! It was a pitch I felt extremely confident in, in any count! This year they helped me with a cutter that I picked up pretty quick! So that was a good combo having sinker/cutter.”

What about your other pitches, how have they developed this season?
“I think all my pitches are developing very nice! I mean I think I have to make my curveball a little sharper, but at the end of the season I saw all of my pitches come together and I was able to command them all in any count! So I’m just very excited for the upcoming year to see what else I can work on. And hopefully stay healthy and just keep climbing the ladder!”