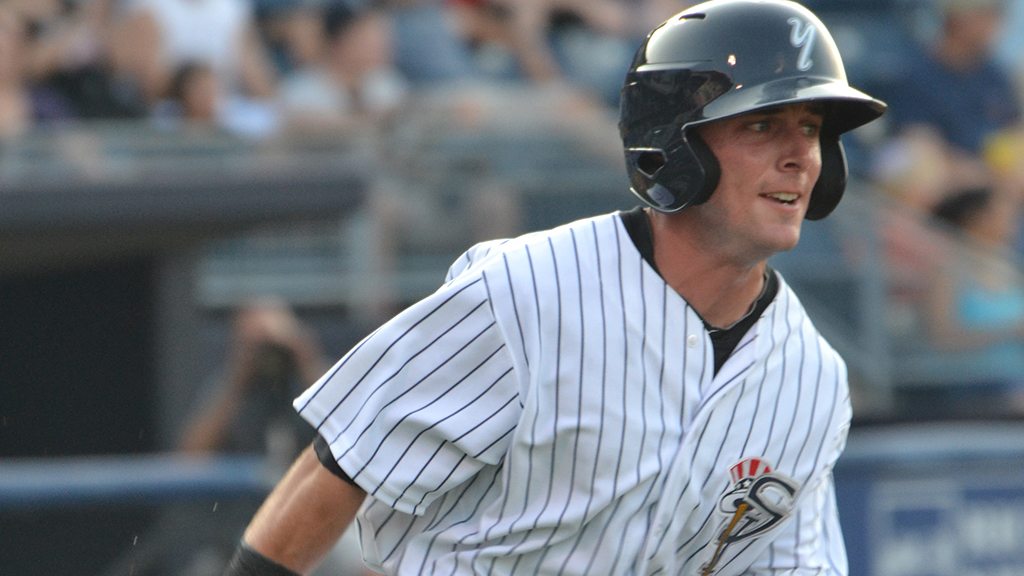 Selected in the eighth round of the 2012 draft outfielder Taylor Dugas has solidified himself as one of the Yankees top outfield prospects. After three professional seasons he has found himself in Triple-A with many viewing him as a future major leaguer. Across all levels of the minors he has batted .295 with 162 walks.

You split the 2014 season between the Trenton Thunder and Scranton/Wilkes-Barre RailRiders. What was the experience like for? What were the differences/similarities between the two levels?
I really enjoyed my time with the Trenton Thunder and Scranton/Wilkes-Barre Railriders. I was fortunate to play for some great coaches who helped me throughout the year. One difference I noticed between the two levels was the strike zone. The AAA strike zone was smaller than the AA strike zone. I also noticed how the AAA pitchers were more experienced and threw a lot more off speed pitches than those in AA. A similarity between the two levels were the bullpen arms. They both threw hard and most of the relievers had a put away pitch to get you out on.

Describe your approach at the plate. Did you make any changes before or during the season?
My approach at the plate is to grind out every at bat and be a tough out. I try to have a patient approach as a hitter and see as many pitches as possible. I want to make the pitcher work for everything and fight off his best pitches. I’m always looking to drive the ball in the middle of the field and make hard contact.

What was the major focus for you this year? What was the main thing you and the coaches worked on during the season?
My main goal for the season was to stay consistent all year. I worked hard on improving my defense at all three outfield positions. I also focused on putting together quality at bats and improving my on base percentage.

What is your focus for the off season? What changes are you looking to make for next season?
This off season I am trying to improve my speed and get better at stealing more bases. Another area I will be focusing on is bunting for hits. I feel that if I improve on my bunting game then it will open up holes on the field and contribute to a higher on base percentage.

Some have drawn comparisons between you and current Yankees LF Brett Gardner. Do you feel that is an apt comparison? What MLB players would you compare yourself to?
I have heard that comparison before but I definitely don’t have as much power as Gardner. I really enjoy watching him hit because of the way he grinds out at bats. He is a tough out. That it something I try to do every at bat. He is a great person to watch play the game because he is tough and plays the game the right way.