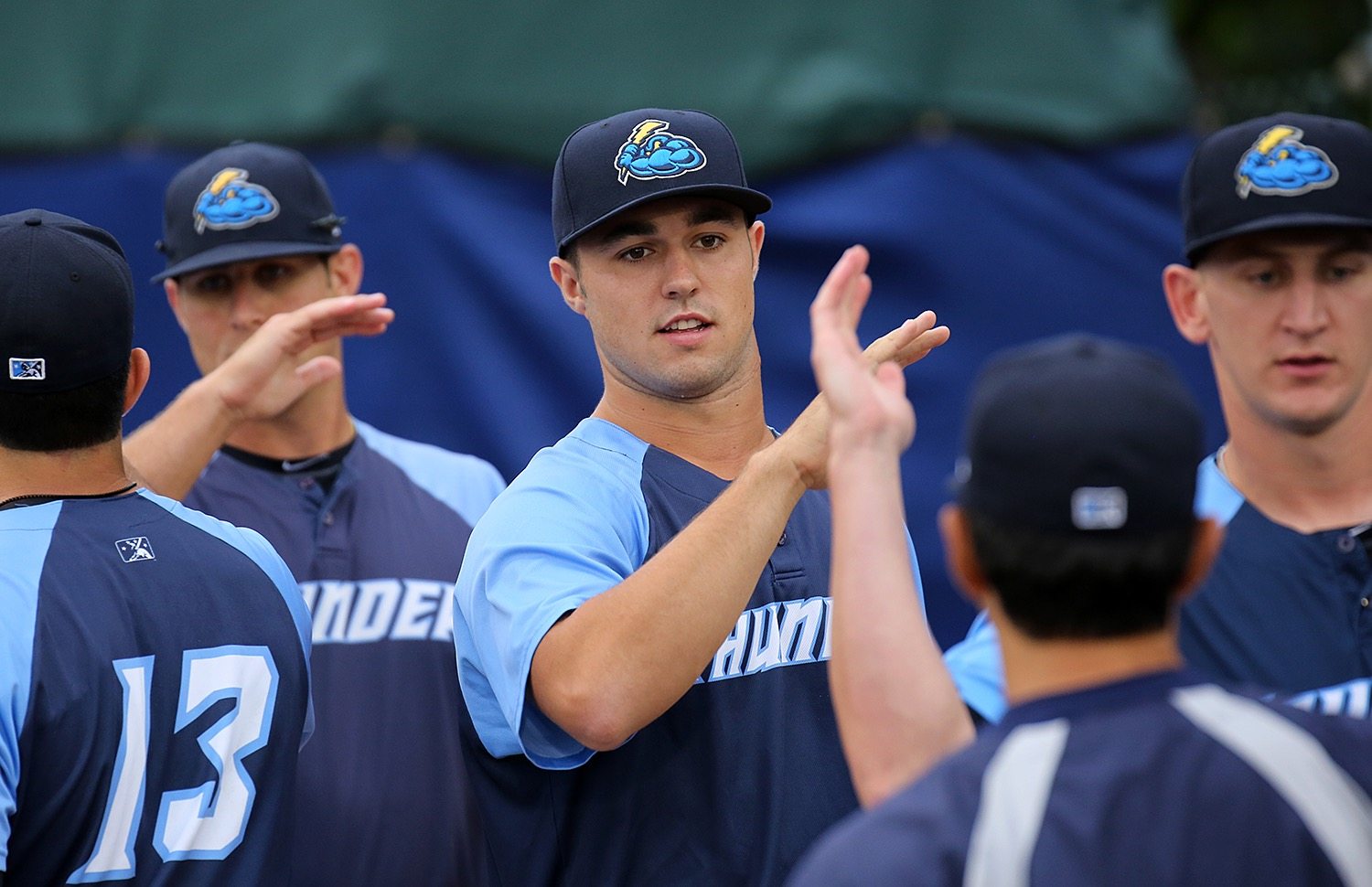 Newcomer J.P. Feyereisen is congratulated by his Trenton teammates after pitching 1.2 scoreless innings on August 3. (Photo by Martin Griff)

TRENTON, NJ – Right-hander J.P. Feyereisen quickly found out what the Yankees were all about when a phone call from Cleveland Indians Director of Player Development Carter Hawkins woke him up Aug. 1.

“Carter told me I was traded to the Yankees, and that (Yankees general manager) Brian Cashman would be calling me to tell me where I was going,” said the 23-year-old Feyereisen, a 6-foot-2, 215-pound native of River Falls, WI, who was Cleveland’s 16th-round pick in the 2014 draft from NCAA Division III Wisconsin-River Falls.

“I’m definitely excited with the opportunity, and to wear Pinstripes.”

The Yankees system and the chance to be a part of it definitely hold something of a mystique for minor-leaguers in their early 20s. These are players who grew up watching Derek Jeter, who many feel is the ultimate big-league player of the era, and the Yankees teams that won a bunch of World Series championships.

“Every kid watched those great Yankees teams, and, when you are young, you dream of playing in Yankee Stadium,” said Feyereisen.

He also feels honored, no matter what happens in his career, he was traded for elite reliever Andrew Miller.

“It’s cool to be traded for a big-leaguer, especially one of the best bullpen arms in baseball, and to be one of the four guys they asked for,” Feyereisen said. “It gives me a lot of confidence.”

Trenton manager Bobby Mitchell, whose team defeated Harrisburg, 6-0, Saturday night and with an impressive 71-42 mark and a solid seven-game hold on the Eastern League East’s wild-card playoff berth, is certainly glad to add another big arm to what has been a formidable bullpen.

The Thunder skipper feels Feyereisen will fit right in.

“It’s always good to get an arm like his,” said Mitchell. “He’s got that reliever mentality. We faced him twice (with Akron). He really did well against us the first time. We’re happy to have him here to help a bullpen that is strong as ever.

“We’ll start J.P. in the middle, fifth, sixth or seventh inning, and see where it goes from there.”

Feyereisen had a successful Trenton debut against Hartford this past Wednesday, tossing 1.2 scoreless innings, striking out a pair, walking one and not allowing a hit. He followed that with two scoreless innings Saturday in Harrisburg. This after serving as Akron’s closer for much of the season, putting together a 4-3, 2.33 mark in 33 games with five saves, striking out 56 and walking 20.

He throws a fastball that sits in the 92-93 area and has hit 94, but his money pitch is a darting slider that arrives between 81 and 84. His command is excellent and he is able to keep the ball down in the zone, allowing just three homers in 44 innings in 2016.

“Whatever they want me to do is fine,” Feyereisen said. “I’m comfortable in any situation, If they want me to close, I’ve done it. It was fun playing in Akron, and, from what I hear, I’m sure the fans here are just as much fun.

“What I know about the Thunder is their pitchers can really throw the ball, and they can score runs, so the hitters are doing their job. I’m really looking forward to playing with these guys.”

Feyereisen earned Cleveland’s notice by leading Wisconsin-Stevens Point to the NCAA Division III World Series. If he realizes his dream and  plays in Yankee Stadium, he will become the second big-leaguer who wore a Pointers uniform – Detroit right-hander Jordan Zimmerman the only other.