Five Pitchers We Can’t Wait to Get in Game Action 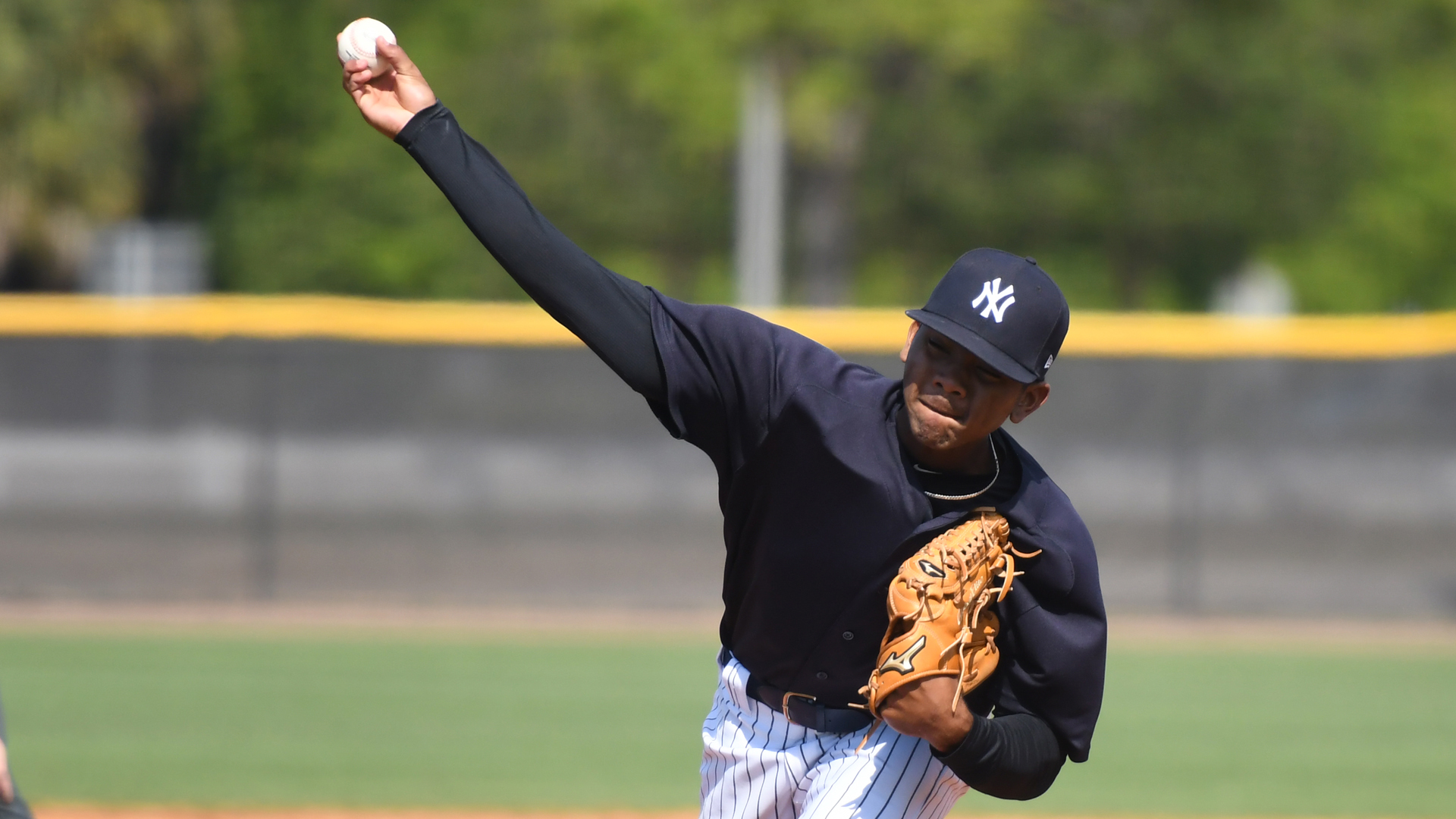 We are at that point between the start of the minor league season and the beginning of the short-season leagues.  There are still several prospects down at the Yankees complex that we cannot wait to see in regular season games.  With that in mind here are five pitching prospects that we are looking forward to seeing pitch.

There is a lot to like about young right-handed pitcher Luis Medina. The 19-year old out of Nagua, Dominican Republic was impressive when I saw him in minor league spring training, demonstrating an overpowering fastball that would regularly hit in the high-90s on the radar gun.  His biggest problem has been the lack of command, something he will learn as he continues to pitch and move up the ladder.

Our friends at 2080Baseball.com have continued to track his progress through extended spring training and note the struggling command as the main thing he needs to work on.  However, there is a lot of potential there.  If everything comes together for him, we could have another potential front-line starter.  I cannot wait for him to get into regular season games.  When I was in spring training, I was told that the Yankees wanted him to get about 100 innings this season, so for that to happen, he must start pitching soon.

Deivi Garcia is a name that most fans might not know yet but one that I think could fly up the Yankees prospect rankings this year.  I had the chance to see him a couple of times in March and came away impressed with his curveball.  I could not say enough good things about his curveball, a pitch that some might consider a plus pitch already at 18-years old.

While I was down in Tampa, his fastball was mostly in the low-90s but reached as high as 95.  His changeup is a work in progress, but he improved it since last season.  I project him to pitch for the Staten Island Yankees this season, and I hope that comes true so that I can get an extended look at him. 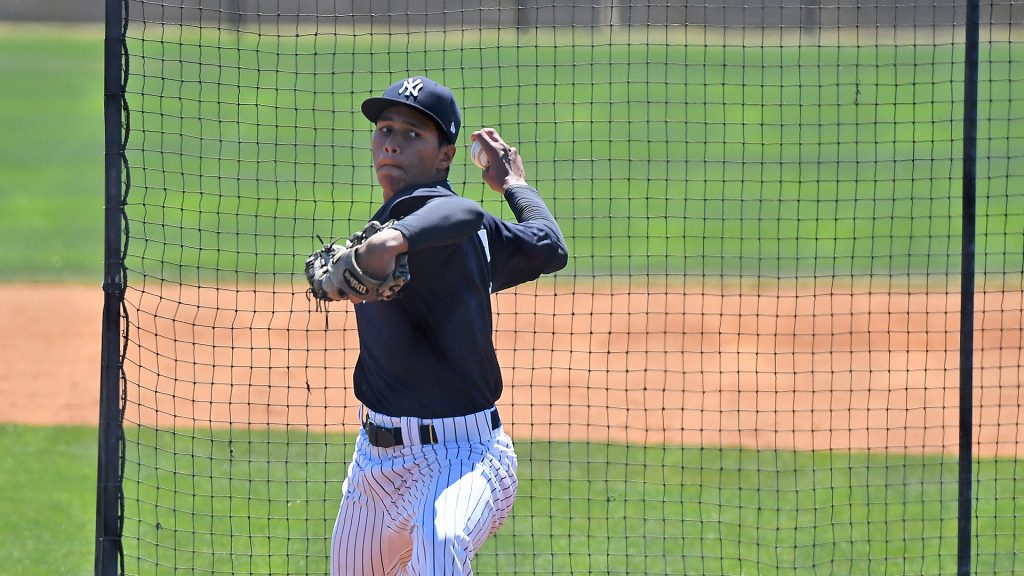 Juan Then pitched in a simulated game down in spring training (Robert M. Pimpsner/Pinstriped Prospects)

Out of all the names on this list, Then is the only player that I did not have the chance to see in game action while I was down in Tampa.  The only time I saw Then pitch was in a simulated just before the games started for that day.

Then was one of the Yankees offseason acquisitions, joining the organization along with J.P. Sears from the Seattle Mariners in exchange for Nick Rumbelow.  Then’s fastball is in the low-90s and is said to have a good feel for his changeup and has a promising curveball. 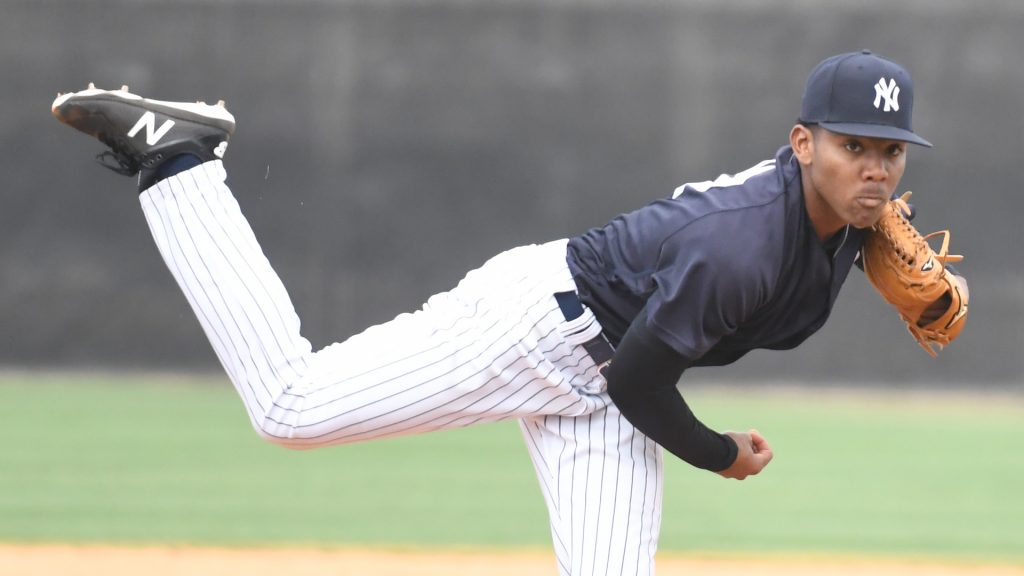 Keep an eye on this kid; he will be the next pitcher from the 2017 draft class to make a significant splash on prospect lists.  When I saw him down in Tampa, he was sitting 92-94 miles per hour with his fastball, topping out at 95.  He also demonstrated a good changeup and even a curveball that is promising.  He is another prospect I expect to pitch in Staten Island this season. 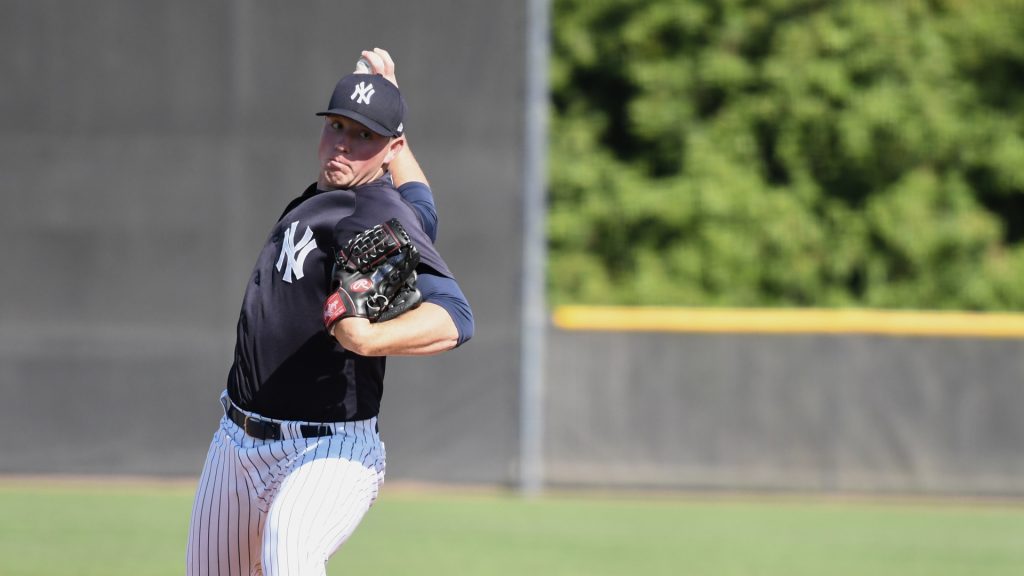 Matt Sauer was last year’s second-round pick and pitched only 11 2/3 innings for the GCL Yankees last season.  I only had the chance to see him once during spring training, in a camp day game where he pitched for the Charleston RiverDogs against the Tampa Tarpons.  At 19-years old he is a perfect candidate to crack the Pulaski Yankees starting rotation this season.