Fleming Has Definitely Opened Some Eyes 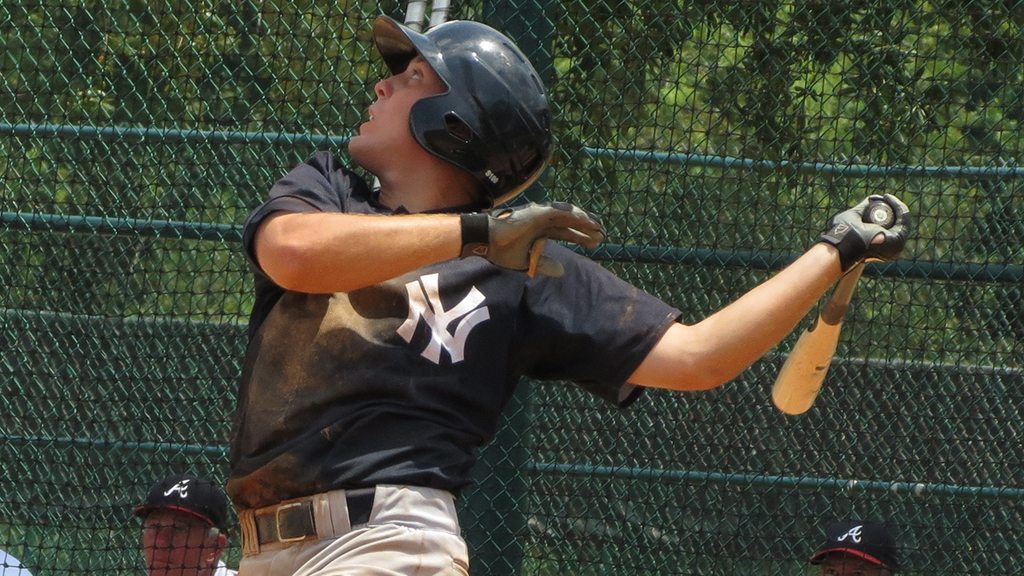 TRENTON, N.J. – Billy Fleming agreed sitting in the Trenton Thunder clubhouse was a bit surreal for him.

“This is the team I watched as a kid,” said Fleming, 22, a graduate of nearby Council Rock South High in Newtown, Pa., just 20 minutes from Arm & Hammer Park. “Just being here, around these guys, seeing how they work.

“I don’t know how long I’ll be here (with the Thunder), but I am certainly enjoying the taste.”

The 6-foot-1, 200-pound Fleming is one of those guys who, by no fault of his own, has two strikes against him before he starts on the professional baseball road. He signed with the Yankees July 22, 2014, as a non-drafted free-agent. No team saw fit to draft him, despite a terrific bat and First Team selections both in the Big 12 and All-East after his senior season at West Virginia University.

He plays first base, second base and can spot in the outfield. First base could be his best position. He hit .238 (8-for-34) with Staten Island in 2014 after signing.

“Who knows how it all went down,” he said. “All I can say is I’ll play wherever they send me. That’s the life of a free-agent signee.”

He started at Class-A Tampa, hitting .364 (4-for-11) in a handful of appearances. He then shuffled off to Pulaski, where manager Tony Franklin watched as he hit .444 (24-for-54) in 15 games. That, with an OPS of 1.156, opened some eyes and he was tabbed to fill a Trenton roster spot when catcher Gary Sanchez went on the inactive list a few days for his appearance in Sunday’s Futures Game.

Fleming played first base in the Thunder’s 7-1 Monday afternoon win over Richmond, putting together a Double-A debut that featured two doubles and a walk in four plate appearances.

“Just to get a chance to play for the team I watched as a kid is a thrill,” he said.

Actually, given the fact Fleming grew up in Lower Bucks County, Pennsylvania, this is not a shock. He hit at Council Rock South. He hit in Northampton Legion play. He took his bat to West Virginia and hit. Now, as a free-agent signee, he is making an impression.

“When the Yankees called, that’s all I needed,” Fleming said. “I got off to a good start at Tampa, and they told me to join Pulaski. As long as I’m playing, that’s fine.”

He clearly over matched the Advanced Rookie level Appalachian League.

“I got in a good groove down there,;” Fleming said. “It was a lot of fun playing for Tony. He’s a great guy. There are a lot of good players down there, (Carlos) Vidal, (Matthew) Duran, (Frank) Frias and others. We were really playing well together.

“They are really doing a good job in Pulaski. Calfee Park, with the improvements they made, is great for both us and the fans. We have a great place to stay in Pulaski and capacity crowds (2,500) are showing up. It’s really a great atmosphere.”

And while Pulaski, with a population of 8.948, is certainly one of the smaller towns, even in Virginia, with professional baseball – the Appalachian League is really unique and fun in its own way – it is in a good area for young professional players. Both Radford University and Virginia Tech are right up the road.

“Nobody has any complaints,” said Fleming. “It’s a lot nicer playing in those towns, and seeing the fans, than the complex league (GCL) for the players.

“The road trips aren’t too long and each ballpark fits the town it is in.”

Fleming learned Thursday, with Rob Segedin going to the DL, he will stay with Trenton.

“Again, wherever,” Fleming said. “This did give me a chance to play at home in front my family and friends (and they came to Arm & Hammer Park to see him in strong fashion), and, if I am sent to Pulaski, Staten Island, Charleston or Tampa, I’ll be working hard to get back here.”

A trip back to Pulaski is possible, but unlikely. He could end up with one of a few teams. For certain, Fleming has made a mark.