For Severino, One Challenge In Road Remains 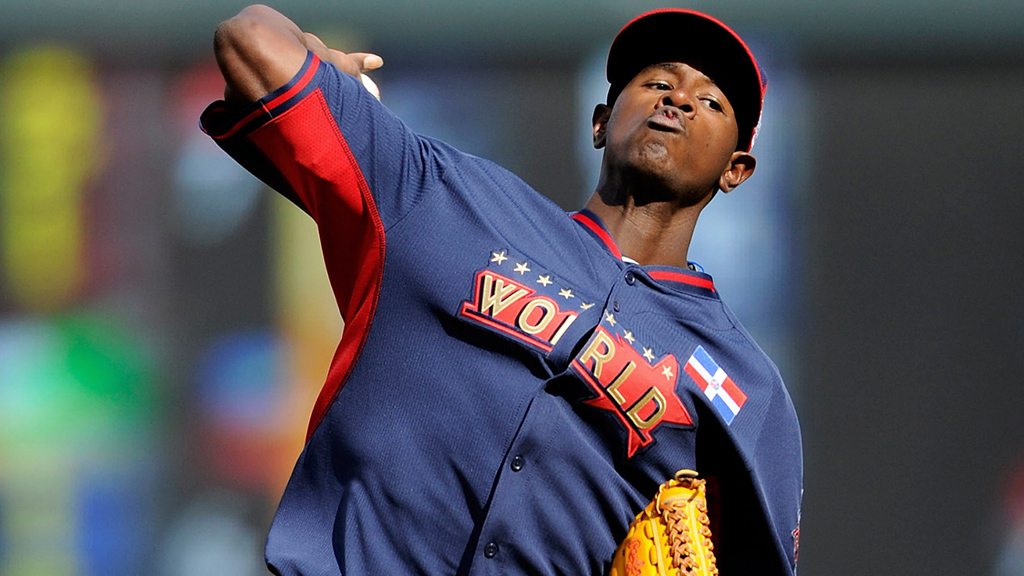 MINNEAPOLIS, MN - JULY 13: Luis Severino of the World Team pitches against the U.S. Team during the SiriusXM All-Star Futures Game at Target Field on July 13, 2014 in Minneapolis, Minnesota. (Photo by Hannah Foslien/Getty Images)

Yankees top prospect Luis Severino has certainly been on a lot of fans’ minds these past few weeks.

Both those who have seen him, and those who have not, have engaged in a debate as to how good this soon-to-be-21-year-old will be for the Bronx Bombers.

Severino, from Sabana Del Mar in the Dominican Republic, is that good. He also has a delivery and pitching style similar to Martinez. He may be short, but is also strong like Martinez. With a drop-and-drive delivery, he throws a moving fastball that sits in the 94-97 mph range and has hit 99.

He mixes that with a changeup that dips and drops just as it reaches the plate.

“He’s got the stuff to be someone special,” said Tony Franklin, the Yankees’ roving observer and upcoming Pulaski manager who had him for six Trenton starts in 2014. “He has stuff that can play in the majors right now.”

Perhaps the idea that Severino is fragile and has a future in the bullpen came from the fact that the Yankees, after he sustained a sprained oblique muscle in August, sat him down for three weeks. Severino keeps stating he was ready to go whenever called upon.

“I feel good,” he said. “This is nothing but precautionary.”

Because of that small bump in the road, Severino may start 2015 back with the Thunder, who will be under the direction of manager Al Pedrique in 2015. Chances are he’ll take the trip up the Pennsylvania Turnpike to Moosic, Pa., within a few weeks.

Speaking of roads, what curve does Severino have to master to join the Yankees rotation? It’s his third pitch, which is actually a hard slider, which travels in the 84-86 mph area. At times, content with racking up strikeouts with his fastball and change, he forgets the slider, which looks to be an average pitch.

That is his 2015 assignment, work on the slider and give it the pinpoint accuracy it needs. Severino already keeps the ball in the park, having allowed just six home runs in 221.1 minor-league innings. He allowed just three in 2014, none at either Tampa or Trenton.

What isn’t shown in the numbers with Severino is the air of confidence he brings to the mound. If he gets into one of the few jams he allowed in 2014 – he gave up just 93 hits – he doesn’t get flustered.

“Luis also has the personality to pitch in the majors,” said Franklin.

So what can be said about the man is he’s a starter, and ought to be a very good one for a long time. His delivery, which is not overtaxing, suits him well. As many have said, “it all works for him.”

His fastball makes hitters buckle with its movement. His changeup keeps them off-balance. A slider that is more than complementary will certainly challenge hitters, with the other two mixed in, at any level.

Once the slider shows it is at least average, the Yankees will have a home-grown rotation star.

Count on it sooner rather than later.