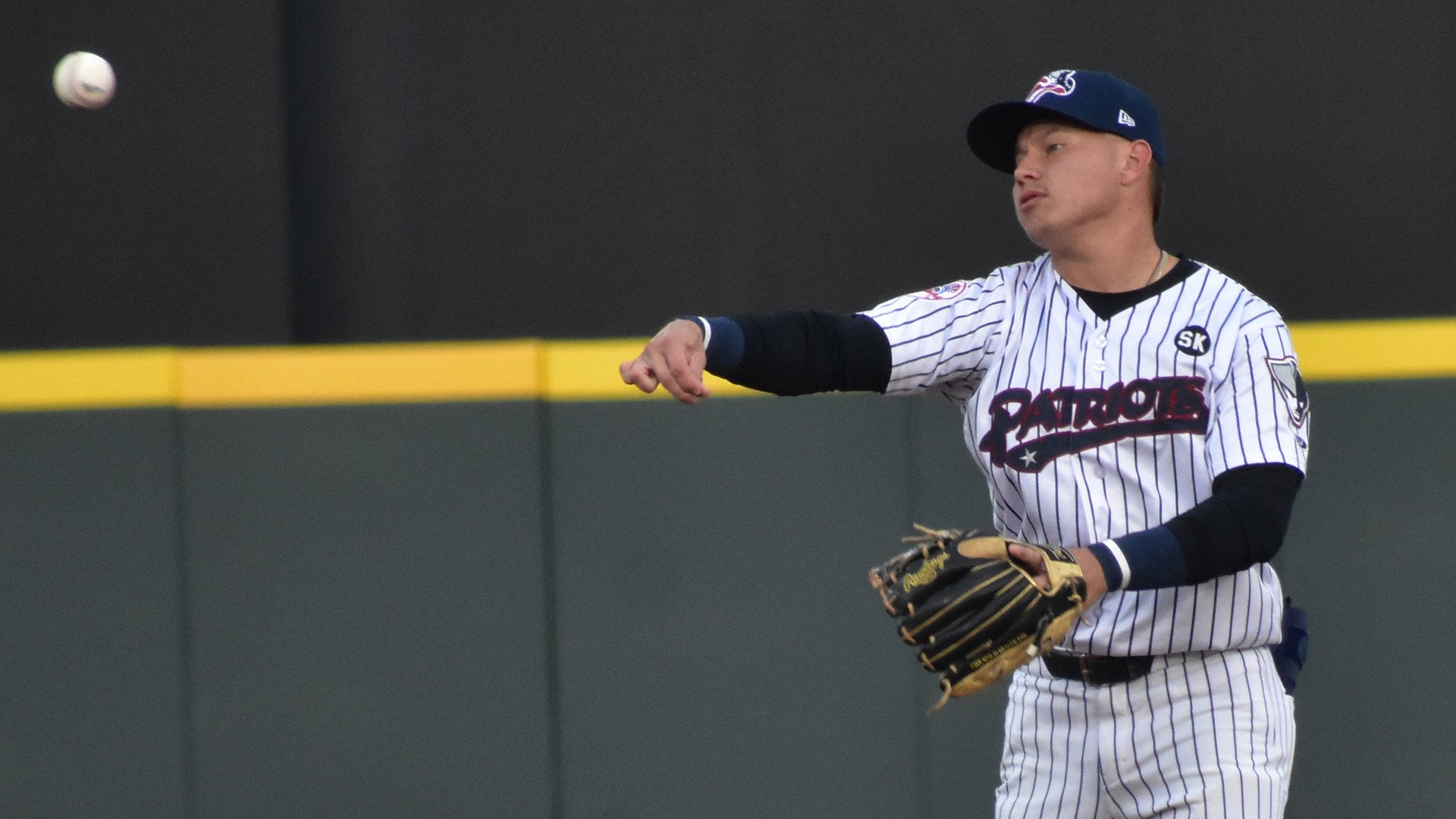 Deigo Castillo playing for the Somerset Patriots on May 7, 2021. (Chris Jones)

By the time the weekend comes and goes in a few days, the Patriots will be just one game shy of reaching the half-way mark of their inaugural affiliated schedule. Somerset currently occupies the top spot in their division and they own the best overall record in the Double-A Northeast league with a 36-19 mark entering action on Thursday. This feels like a good point to reflect on the roster and point out some of the breakout and surprise first half performances that have propelled the team to their outstanding start. 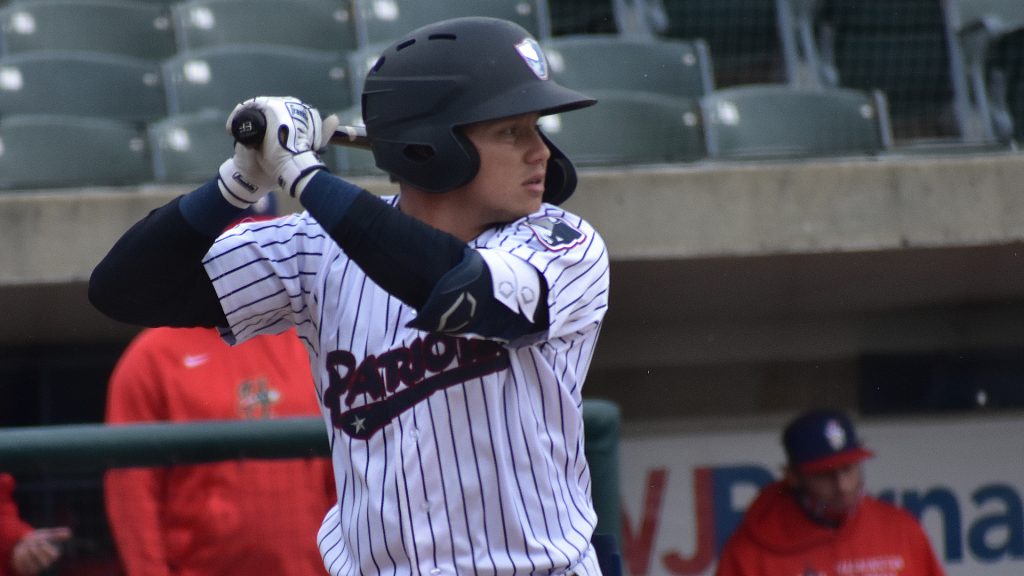 Diego Castillo playing for the Somerset Patriots on May 9, 2021. (Chirs Jones)

Diego Castillo: The first name that comes to mind when thinking about this sort of list is Castillo. The 23-year old versatile infielder is the reigning Double-A Northeast League Player of the Month for June and currently owns a slash line of .327/.378/.606 with as many extra base hits (24) as strikeouts over the first 55 games of the season. While Castillo’s ability to hit consistently has opened eyes throughout the organization, his power production has probably come as the even bigger surprise. Prior to 2021, the Venezuelan-native had hit 8 homers total over the first five seasons of his career. Breaking that down a bit further, this season Castillo is going deep once every 18 at bats when before the year began, he homered about once every 219 at bats.

“I’m not going there trying to hit homers,” admitted Castillo in a recent Zoom session with reporters. “I’m trying to hit the ball on the barrel all of the time; that’s my key right now.”

Castillo and a cast of many other Patriots have spoken this season about the Yankees emphasis on launch angle and the data points behind utilizing that have proven to pay massive dividends for him thus far. 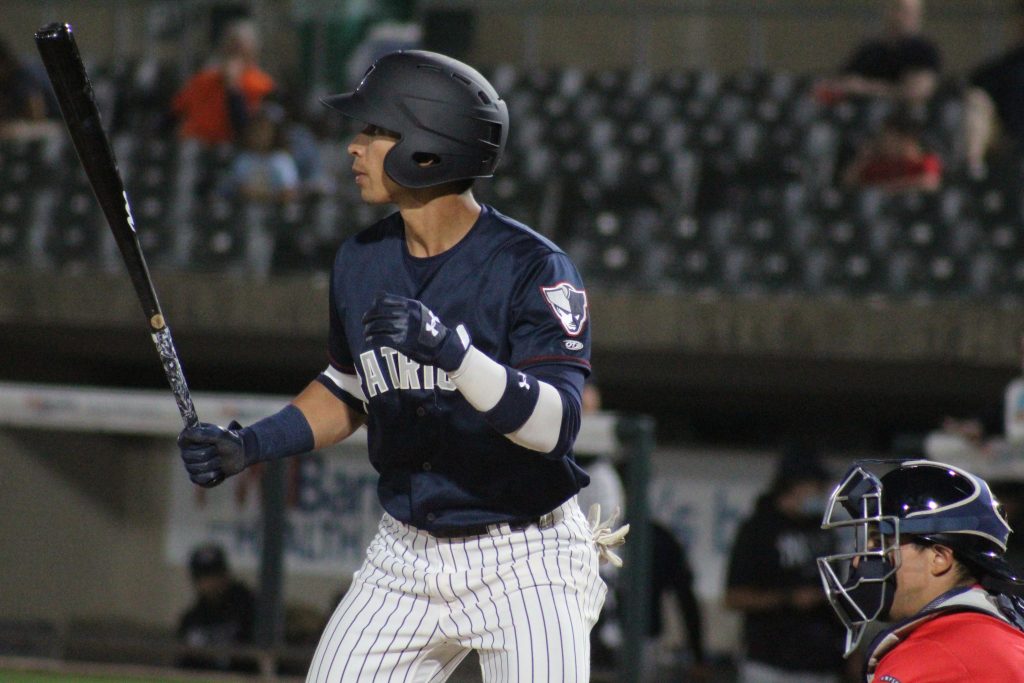 Oswaldo Cabrera: Much like Castillo, who happens to be his roommate, Oswaldo Cabrera is in the midst of near two month stretch of consistent production that has helped fuel Somerset’s success. After hitting just .214 in the opening month of May, Cabrera came on strong to hit .295 in June and has maintained that pace with a .296 mark in the early going of July. The 22-year old infielder is the team leader in RBI with 34 and already has blasted 10 homers in just 47 games, a new single season mark for him. While Cabrera had featured a bit more power previously than Castillo had, he is still seeing a similar ascension in his power production frequency that hadn’t been seen prior to 2021.

Before 2021, Cabrera homered about once every 70 at bats, but this season has seen that clip dwindle down to a long ball every 19 at bats.

“I’m not looking for a homer every time,” Cabrera told reporters recently. “Just trying to make good contact and that happens. I made some adjustments this year, and in the system, too. I was making adjustments with the hitting coach, the manager told me little things that are going to help me. Things like hands, posture, and some things that would help me get to the ball more consistent.” 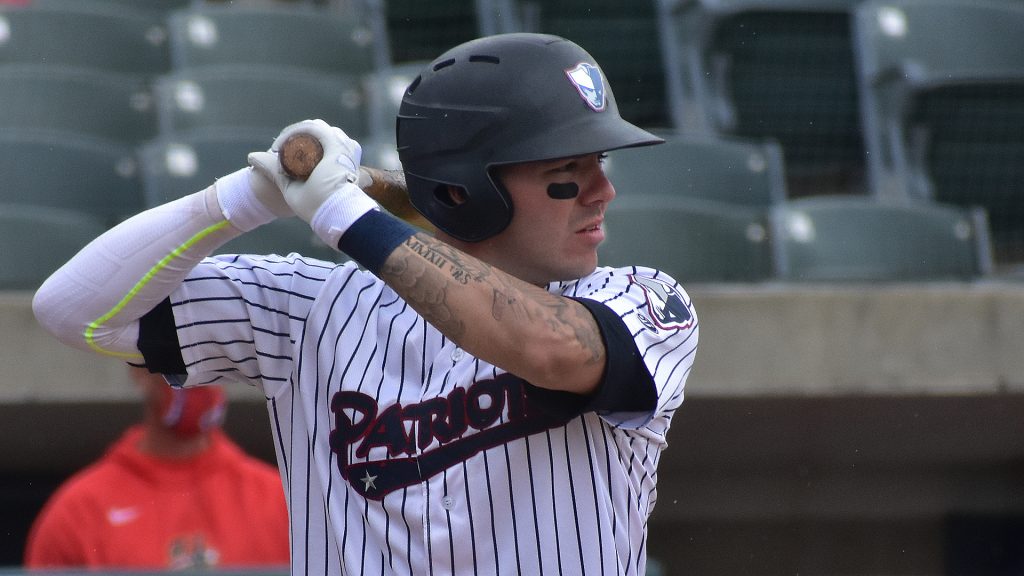 Donny Sands playing for the Somerset Patriots on May 9, 2021. (Chirs Jones)

Donny Sands: No player has become a fan favorite quicker in Somerset than the Patriots catcher has. Sands is one of the bigger personalities on the team and he brings a strong bonding element to the roster that is so important for chemistry throughout the year. Besides that though, he is a damn good baseball player in the midst of a career season.

The 25-year old backstop already has nine homers after hitting just eight total over the first five seasons of his professional career. Sense a theme, right? The whole launch-angle, barrel metric thing? Yeah, that. Sands is slashing a respectable .257/.330/.467 and has caught the best pitching staff in terms of ERA in minor league baseball in 35 of the teams 55 contests thus far.

Sands has seen his walk percentage go up to 8.6%, his highest mark since 2017, while his strikeout percentage has dropped to 11.9%, his lowest mark there since his time in rookie ball back in 2015.

“I think as you get older, you start to learn your swing a little more,” admitted Sands during a group media session during the teams last home stand in June. “You start to quiet things down and be more efficient; not trying to do too much but I think that you know if you hit the ball solid in the air the ball will go. It’s just trying to stay consistent with what we’re doing and just keep everything calm and easy.” 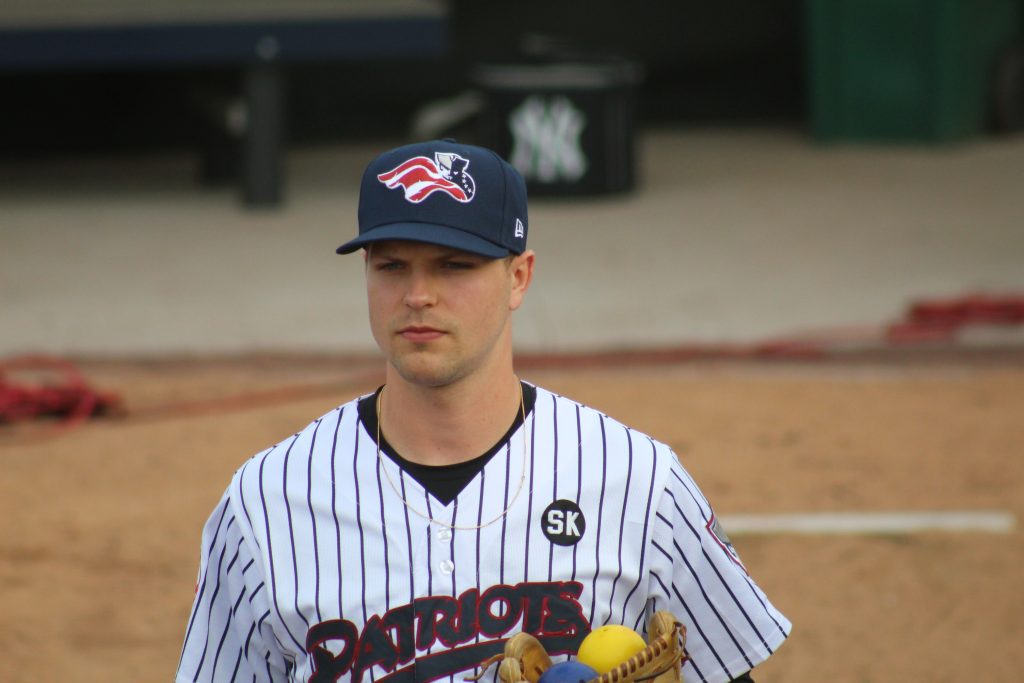 Janson Junk: The Patriots entered play on July 7 with a 2.98 team ERA, which was the best mark in all of minor league baseball in terms of full-season affiliates. A big contributor to that mark has been the reigning Double-A Northeast League Pitcher of the Month in Janson Junk. After tossing five innings of one run ball against Erie on Wednesday night, the 25-year old 2017 draftee has the lowest qualified ERA in all of minor league baseball with a 1.08 mark. What’s more remarkable is how long Junk has maintained his dominance; after his second outing of the year back on May 13, Junk’s ERA was at 1.29 and it has not gone any higher than that in almost two months.

Manager Julio Mosquera has deployed Junk predominantly in a piggy-back situation for much of the season, but after not being allowed to go more than four innings in any of his first six outings, Junk has averaged just above 5.2 innings in his last five appearances. The most noticeable difference that I have seen in Junk is the vast improvement in his command of the strike zone. Before this season, Junk pitched to a cumulative 1.56 WHIP in three seasons, but in 2021 Junk is among the top-three in qualified pitchers in all of minor league baseball with a sparkling 0.82 WHIP.

Junk has credited the vast improvement of his slider during the lost 2020 season as one of the main things that has allowed him to be so successful, particularly against right-handers.

“It was mostly getting my slider tuned back in,” Junk said in the first month of the season. “I wanted a better distinction between my curveball and my slider, which I didn’t think I had back in 2019. I think they just blended into each other too much; my slider was a little bit slurvey, it wasn’t consistent and it wasn’t good enough to get outs.” 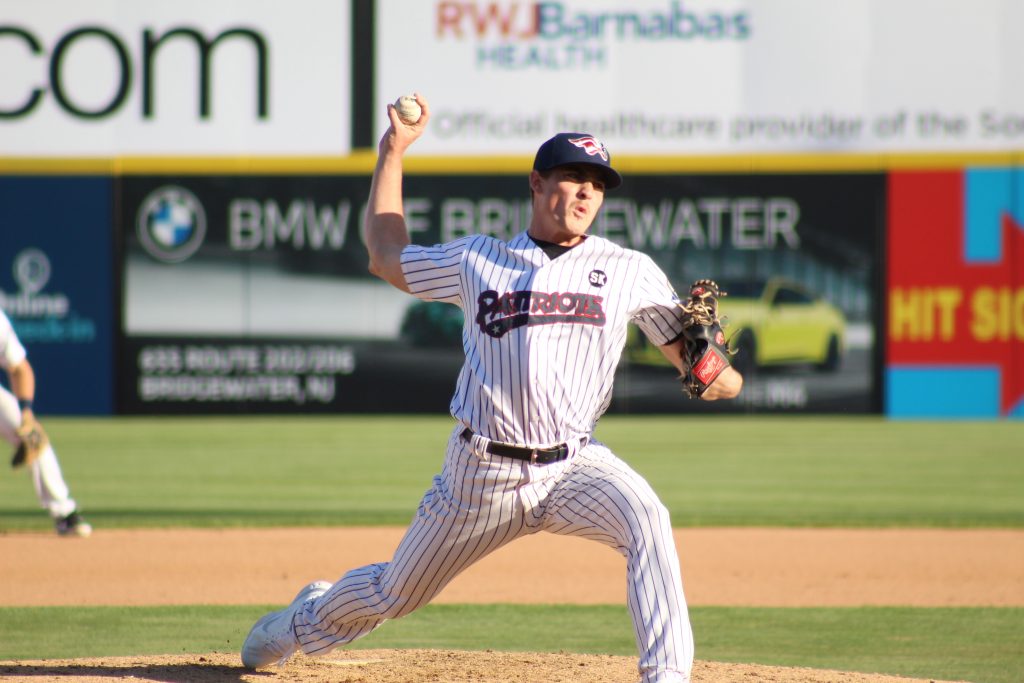 Ron Marinaccio: A lot of attention was paid early on to high-leverage relievers Greg Weissert and Stephen Ridings, and for good reason, but the most consistent and dominant reliever in the Patriots bullpen this season has been Ron Marinaccio. A local New Jersey product, the 26-year old righty leads the team in appearances with 14 and has the most strikeouts of any pitcher that has been used exclusively in a bullpen role.

The 2017 draftee out of the University of Delaware has worked 25 innings and has fanned 40 batters and held the opposition to a team best .122 batting average. For the numbers that Marinaccio has put up, he has very much flown under the radar but with both Weissert and Ridings now at Triple-A, he is going to be a key cog out of the bullpen for Mosquera in the second half of the season. Though if Marinaccio continues to shove the way he has for the Patriots, he too may be riding the rails up to Scranton before long.