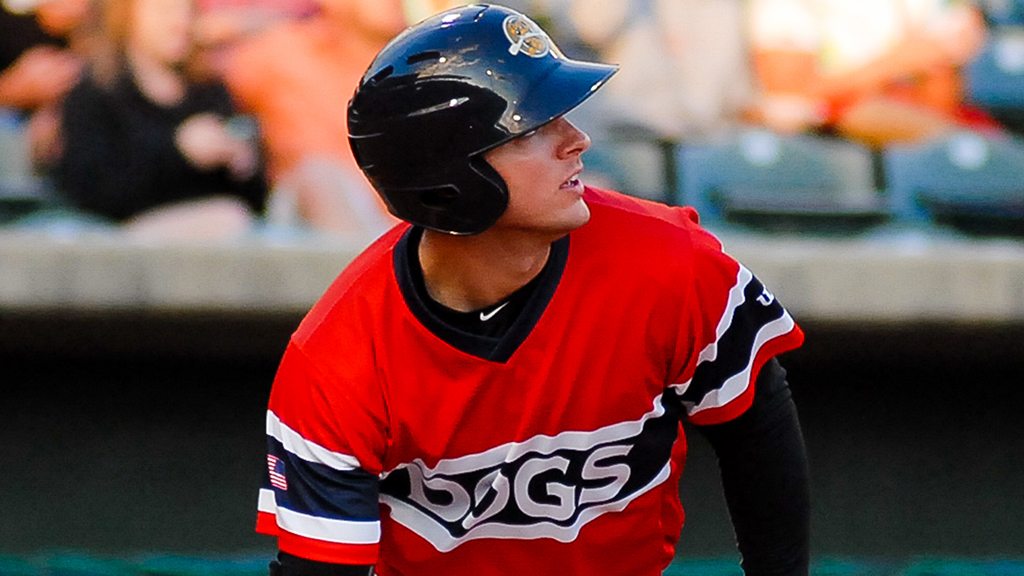 CHARLESTON, S.C. — The Charleston RiverDogs fought back to erase three deficits in Friday night’s game, but a four-run eighth inning lifted the Kannapolis Intimidators to the 12-6 win in front of 5,113 fans at Joseph P. Riley, Jr. Park.

With the game tied 6-6 in the top of the eighth, Kannapolis (8-8 second half, 43-42 overall) loaded the bases with two outs against Andre Del Bosque (4-4). Eddy Alvarez belted a double to right field to clear the bases and scored himself on a two-base error as Ryan Lindemuth’s relay throw home rolled into the Intimidators’ dugout.

Kannapolis jumped out to an early 1-0 lead in the first on an RBI double by Alexander Simon. Charleston (6-10, 40-46) answered back with three runs in the bottom half of the frame.

The RiverDogs loaded the bases with no outs against Kanny’s starter Yency Almonte. Isaias Tejeda grounded out to the pitcher and plated the first run, Bo Thompson put the R’Dogs ahead with a sacrifice fly to bring home Jorge Mateo and Austin Aune capped off the inning with an RBI single that plated Angel Aguilar.

Kannapolis matched the RiverDogs’ three-run inning in the top of the second. Michael Danner hit a two-run triple, and Ryan Ploude lined an RBI single to right which put the Intimidators back in front for the moment 4-3. Rainiero Coa led off the bottom of the second with a single to right, he advanced to third on via a wild pitch and and a ground out, and then scored on an RBI single by Lindemuth.

The teams went scoreless through the next two innings, until Kannapolis broke the 4-4 tie with two outs in the fifth. With two on and two out, Dillon McNamara entered the game to replace Conner Kendrick.

Ryan Leonards hit a ground ball to right, and Alvarez scored as Alexander Palma’s throw bounced over Coa’s head. Runners advanced to second and third on the error, and Nick Basto came home on a wild pitch, which upped the Kanny lead to 6-4.

The RiverDogs inched closer in the bottom of the sixth. With the bases loaded and one out, a pitch got past the catcher Plourde and allowed Palma to score. Mateo walked to re-load the bases, but Aguilar struck out and Tejeda grounded into a fielder’s choice to end the threat.

Charleston would rally back and tied the game in the seventh. Palma ripped a two-out triple down the left field line, and Coa followed with a base hit to right to even the score 6-6. Brad Salgado (2-3) blew the save, but earned a win as well after the Intimidators rallied back to take the lead for good in the eighth.

Kannapolis added two additional runs of insurance in the top of the ninth to increase their lead to 12-6. Basto led off with a single and scored on Leonards’ triple to right. Leonards crossed home two batters later on Michael Danner’s RBI double. Later in the inning, Lindemuth went to the mound from second base, for his first professional pitching appearance and retired Alvarez with a fly out to centerfield on two pitches.

BALLPARK FUN: The RiverDogs hitting clinic was a huge success in the morning, as many youth baseball players hit the field with members of the RiverDogs to learn about the fundaments of hitting. Titus the Bat Dog made an appearance at The Joe and entertained fans. He did some tricks in between innings and assisted with Bat Boy duties for an inning. Fans enjoyed fireworks over the scenic Ashley River for the second time in the nine-game homestand. The RiverDogs honored Mayor Joe Riley, for whom the stadium is named with a pyrotechnic salute in right field.

COMING UP: The RiverDogs continue their five-game home series against Kannapolis Saturday at 6:05 p.m. Charleston will send LHP Justin Kamplain (2-10, 4.50 ERA) to the mound against RHP Zach Thompson (2-3, 4.50 ERA) for the Intimidators. You can watch the game on MiLB.tv or listen to the action on “The Big Talker” 1250 WTMA, WTMA.com, and RiverDogs.com beginning at 5:35 p.m. with another edition of “Saturday Dog Talk.”

Start off your Saturday morning at 9 o’clock with Downward Facing RiverDog Yoga, featuring renowned yoga instructor Kathryn Budig. Purchase your tickets athttp://cr1.glitnirticketing.com/crticket/web/stadiumg.php?event_id=191&status_id=2. Saturday is Kickin’ 92.5 Military Appreciation Night, presented by ISHPI. All active, retired and immediate military family members will receive free admission to the game. The RiverDogs will be wearing custom-made “Green Army Man” jerseys presented by ISHPI, which will be auctioned off through a silent auction during the game. Saturday night’s giveaways include a Military Heroes Baseball Card set, featuring actual military members instead of baseball players, and Green Army Men presented by WCBD News 2. Ever dream of rounding third base and heading for home at The Joe? Saturday night is another chance to make that dream come true as kids are able to run around the diamond every Saturday, with the Postgame Kids Run the Bases program presented by CPI Security Systems.