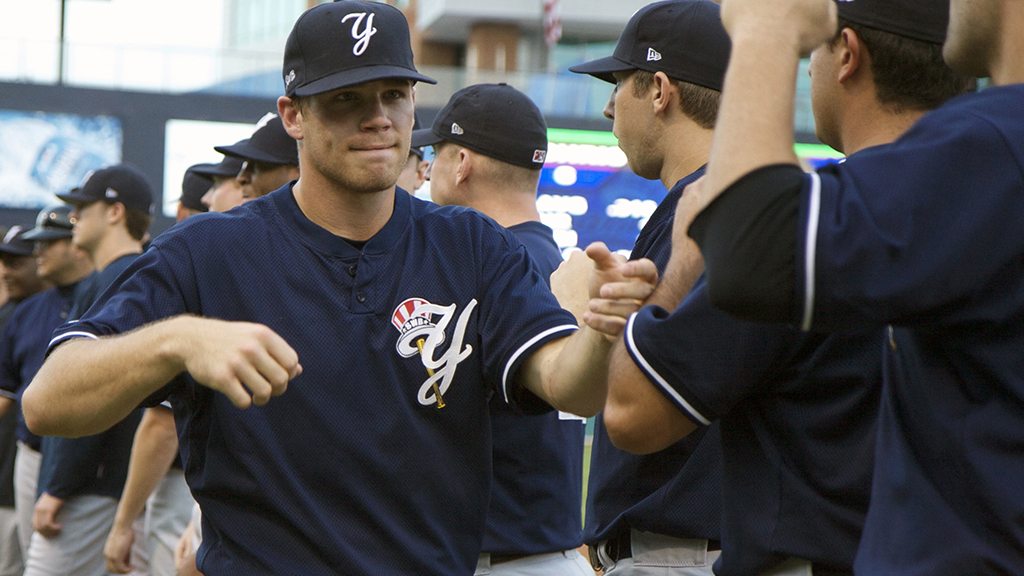 With the 27th overall pick of the 2003 First-Year-Player Draft the New York Yankees selected Seton Hall Prep star Eric Duncan. The highly touted third base prospect was said to have been the best hitting prospect in the Gulf Coast League when he made his debut that season.

Coaches praised Duncan’s swing mechanics and his raw power but his below-average defense at third led to questions of if he will remain at the hot corner as he developed. The 18 year old first-year professional baseball player out of West Orange, New Jersey earned a late season promotion to the Staten Island Yankees after hitting a respectable .278 with 50 hits in 180 at bats. That two week stretch in the New York-Penn League he excelled hitting .373 in 14 games but that would be the only time in his career that he would hit above .275.

Eric continued to push through the Yankees farm system playing with the Battle Creek and Tampa Yankees in 2004. But in 2005 at age 20 the Yankees aggressively pushed him to Double-A where he began to struggle, hitting just .235. In 2006 the Yankees promoted him again to Triple-A Columbus where his struggles saw him just .209 before being demoted to the Eastern League.

Duncan’s prospect status began to fall. He was rated the top prospect in the Yankees farm system in 2004 but after his struggles in 2006 he fell to #13 on the list and then after 2007 he was completely off the list. On November 9, 2009 he was granted free agency at the age of 24, allowing him to try to make it with another organization. In the years that followed he was with the Braves, Rockies, Cardinals, and Royals never making it out of Double-A until he retired from playing after the 2012 season.

“I was afforded every opportunity to succeed,” Duncan said in an interview with ESPN in 2014. “I got to work with some great hitting coaches, great fielding coaches. Guys that made a ton of sense. Guys who could articulate what they wanted to say. It was up to me to be able to play well enough. It is too bad that these coaches in the minor league level, the player development side, get a bad rap because they are doing everything they can. It is up to guys like me to get to the big leagues. I didn’t play well enough.”

Now after two years as a coach with the Seton Hall Pirates Duncan is returning to the Yankees. In 2015 Duncan will serve as a coach with the Class-A Staten Island Yankees, at the same stadium he hit over .300 for the only time in his professional career. There he will get the chance to learn more about coaching from veteran coaches like Ty Hawkins who is entering his 10th season as the SI Yankees hitting coach and pitching coach Butch Henry who has experience in the affiliated and independent leagues.

Duncan is bringing with him a track record of success as a coach from the Pirates. Under his guidance the Seton Hall baseball team led the BIG EAST Conference with a .297 batting average in 2014. Will he bring some of that good luck to the Baby Bombers in 2015? Only time will tell but the Yankees are happy to have him back.