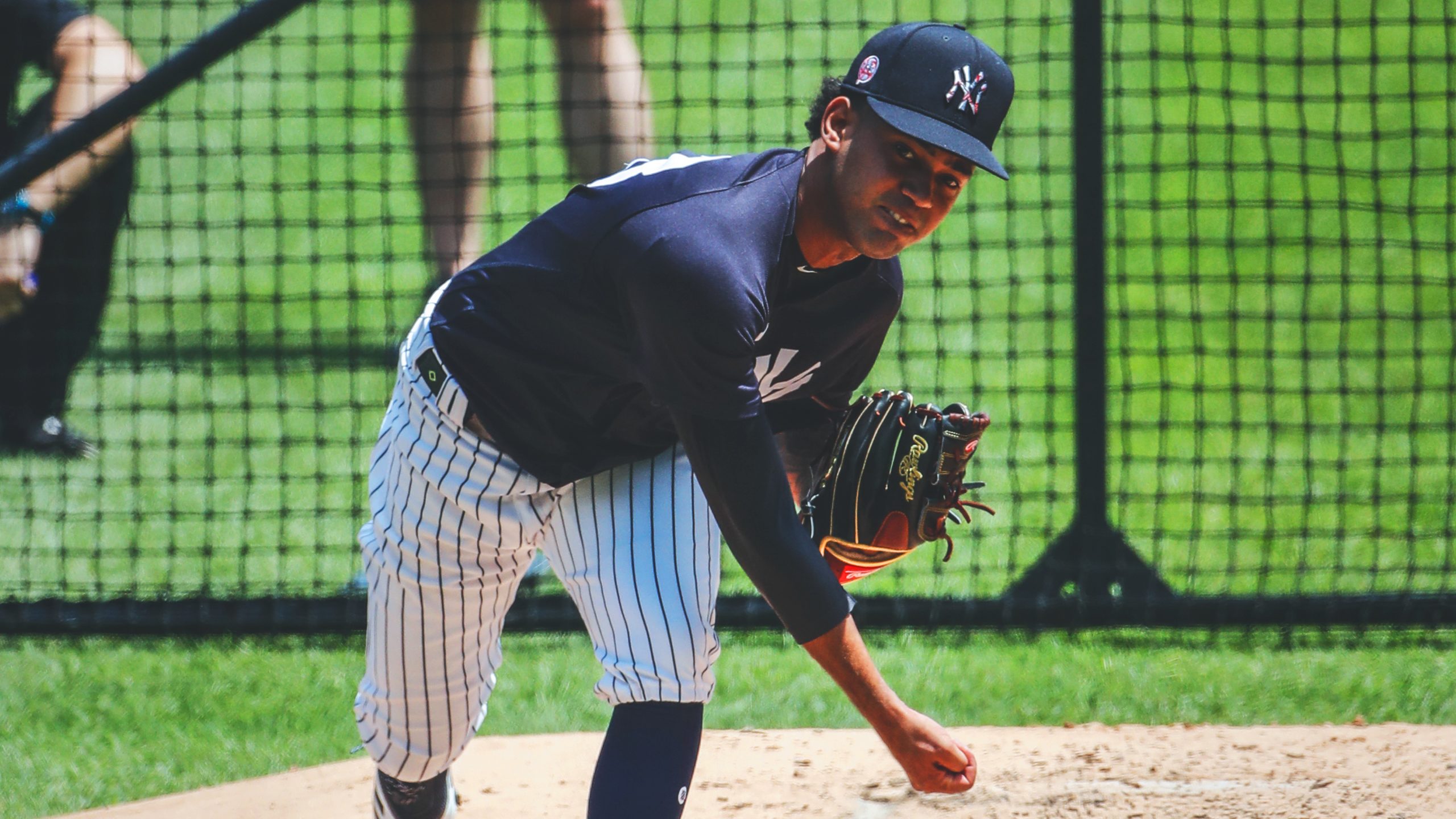 Yankees prospects, Deivi Garcia and Estevan Florial met with the media prior to their Summer Camp workouts this afternoon at Yankee Stadium. Both Garcia and Florial are members of the 40-man roster that is full of top prospects and both are fighting for a spot on what will be a 30, then 28, then down to 26-man roster for the 2020 regular season.

When asked if he expected to be a part of the 60-player pool, Garcia stated that he wanted to be ready in case he got that call. “It was about keeping a positive mind and keeping on training and keeping myself in shape in case that call came,” stated Garcia. Garcia mentioned that he trained through the quarantine and MLB shut down and when it was confirmed that MLB was going to ramp up and have a season, he just waited until he got the call to join the team.

Garcia was back home in the Dominican Republic, where he trained with his brother who is also a professional baseball player. Garcia stated that they trained at home and when he needed to do more than just regular catch, like long-toss and other work, they would go to a local field when not many people were around.

When asked about his strengths and weaknesses, Garcia noted his fastball. “I would definitely say of my pluses is the spin of my fastball,” stated Garcia. “I’ve been told it’s very good. Commanding it is a good help of my arsenal,” stated Garcia.

Garcia stated he wants to improve on being more aggressive in counts and using his secondary pitches more effectively.

Last season, Garcia was moved from the starting position to also coming out the Bullpen. He stated that while the preparation is different coming out of the bullpen, you have to be ready much faster and at any given point and that it’s about making adjustments to whatever is needed. Garcia stated he did not have difficulty with switching roles as he knew what days he was going to play, which would help.

Both Garcia and Florial were asked how the cancellation of the 2020 Minor League season was going to affect them. Garcia stated that with the extra time he’s been able to work on reading patterns and understanding what hitters are trying to do. He credits being around the Major League level of players as helping him to make this improvement, as well as having a strong mindset and understanding what it takes on and off the field. 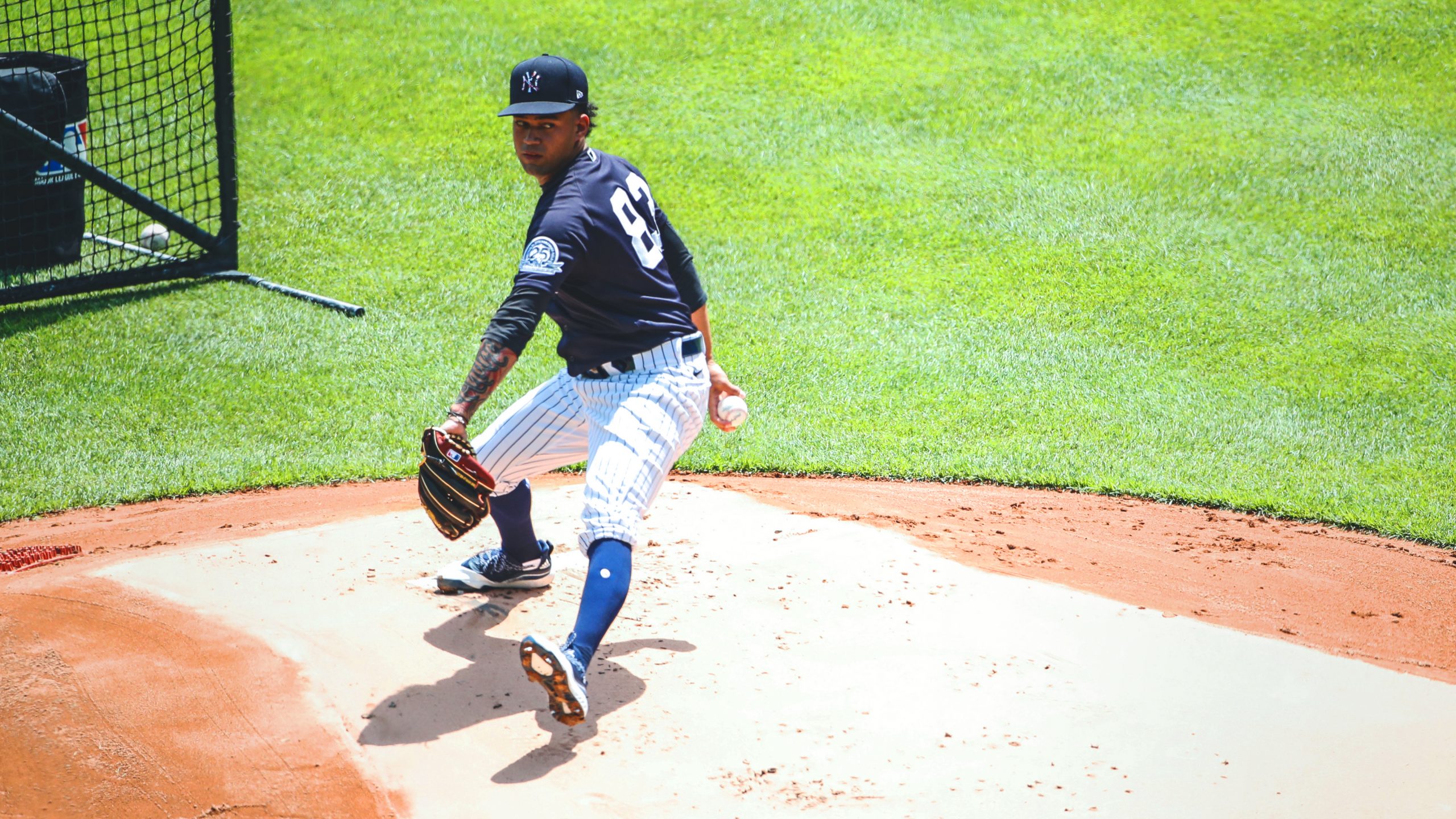 He stated that he doesn’t feel no Minor League season will hold him back or prevent him from taking strides on his career. “I’m here today and thankful for the opportunity to be in this camp and showcase what I can do on the field,” stated Garcia, who is fighting for a role on the regular-season roster.

Florial also stated that it’s a tough situation not having a minor league season, but that they have great coaches around them telling them what to do in case. “A lot of people around us can help us to keep ready if we need to, mentally and physically,” stated Florial.

When asked about getting a role on the big league roster this season, Garcia stated that it’s about doing your job and going out there and doing the best you can performing and understanding that while it’s a competition, you have really good teammates around you to learn from. “You balance that, you try to execute, and do the job to the best of your abilities,” stated Garcia. He stated he works on controlling what he can on the field and execute as much as possible while focusing on the job.

Florial also spoke on fighting for a spot on the roster, stating that you never know what can happen. “I’m ready for whatever is the case to help the team,” stated Florial. If the team needs me, I’m going to be ready for them.”

Florial stated in Tampa during the quarantine and used those facilities. He stated he loved being around Aaron Judge and Giancarlo Stanton. “There’s a lot you can do to learn from those guys, mentally and defensively,” stated Florial.

Both Garcia and Florial are two players who have good chances of making the roster this year. Both of these players can help the Yankees during the 2020 season. Garcia is strong coming out of the bullpen and Florial’s athleticism and speed could be great benefits for the Yankees, especially considering this year’s man-on-second extra-innings rules.