TRENTON – The crown jewel of the Yankees farm system, Gleyber Torres, got acquainted with the confines of his new home for the first time on Tuesday afternoon at ARM & HAMMER Park in Trenton. The 20-year old Torres, whom the Yankees acquired from the Cubs as the centerpiece of their haul for closer Aroldis Chapman last July, is already drawing rave reviews from his new manager.

“I saw him [Gleyber] in big league camp and he is very mature for his age,” explained Thunder Manager Bobby Mitchell at Tuesday’s Media Day. “He is only 20-years old, but you watch him play baseball and it is like he is mentoring because he is so prepared. He knows exactly what to do and knows how to make adjustments. He studies the pitchers and knows the game well and he is just really talented. ”

Torres was recognized last week with the James P. Dawson Award, an honor bestowed upon the top rookie performer in Yankees big league camp. The star-studded infielder hit .448 (13-for-29) with two homers and nine RBI in 19 games. That experience for Torres coupled with his MVP campaign in the Arizona Fall League should prove valuable as he heads into the minor leagues upper levels for the very first time. 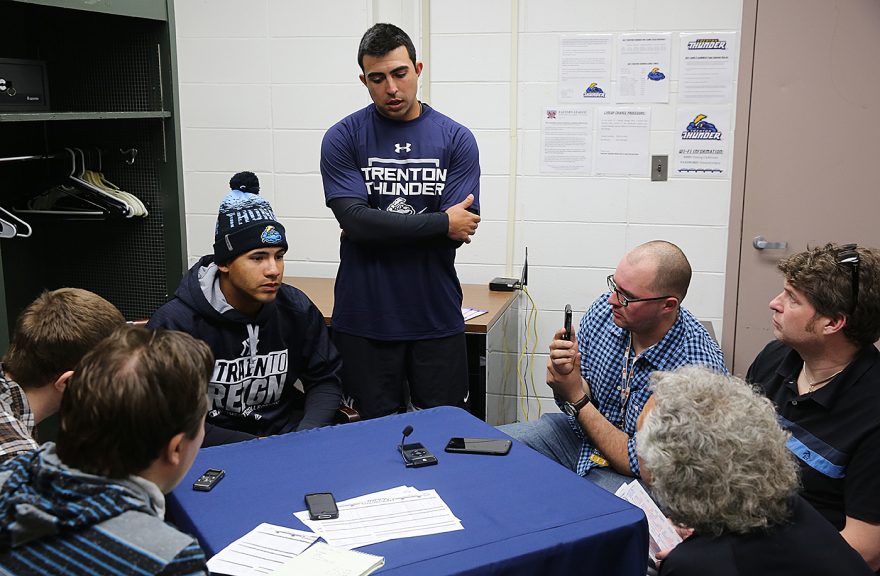 Infielder Gleyber Torres and pitcher Daniel Camarena, serving as interpreter, are interviewed by media in the visitors’ locker room at ARM & HAMMER Park in Trenton on Tuesday April 4, 2017. Photo by Martin Griff

“This was the first year with the Yankees having a full offseason and my first spring training, too,” said Torres. “It was pretty good; something different, something new. I saw a lot of good teams and everybody helped me.”

Torres added, “In the fall league, every team is putting their best prospects there for their organization. There are a lot of good players and a lot of good pitchers. This year, I feel no pressure. I’m more comfortable and I think that helped me for this year.”

While Torres may ultimately prove to be the Yankees shortstop of the future, the organization would like to expand his versatility around the infield so that he may be able to fill a need at a variety of positions. Mitchell says that Torres will be his primary shortstop but will also see significant playing time at both second and third base.

“He needs the experience to be versatile and that can only help him,” Mitchell said. “We usually go on an eight day rotation ; he will probably go three games at shortstop, two at third, and two at second and then a day off.”

The Yankees are equipped with an embarrassment of riches as far as it concerns elite shortstop depth throughout their system. In addition to Torres, both Tyler Wade and Jorge Mateo have also been asked to move around the diamond and learn new positions in order to maximize flexibility.

“I am excited about the opportunity to play different positions, especially for the future,” Torres said. “I am going to play each of them hard.”

As Torres continues to perform well at each stop, Yankee fans seem to grow more eager to see the Venezuelan product in the major leagues. As the pressure to perform increases daily, Torres never seems to waver from his calm, cool and collected mantra. 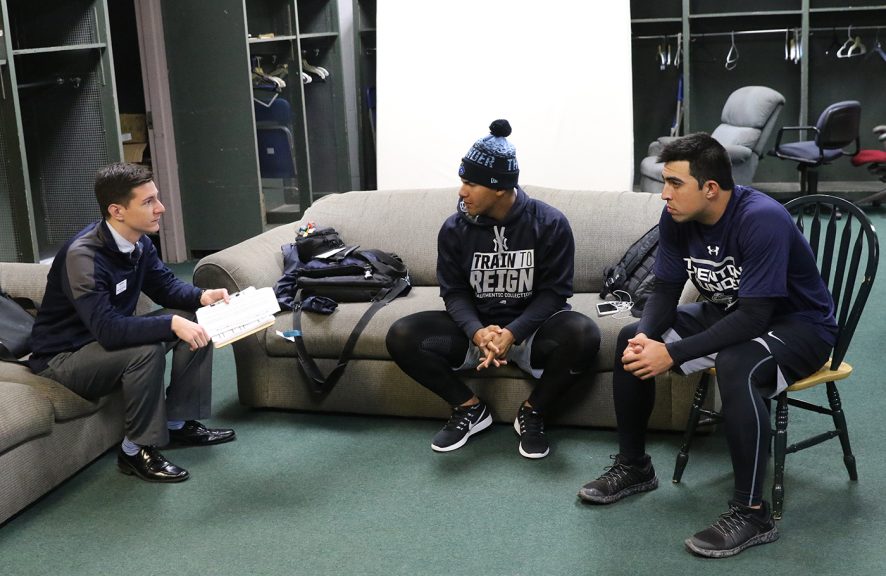 “The most important thing for me is to just take more experience and enjoy playing my game every day and just take it day-by-day,” Torres said. “I prepare before the game, I stay focused, I do the training; my routine is very important to me. I don’t think about the pressure too much. Just everyday go out there and play my game and I think that is the key.”

Mitchell only worked directly with Torres for a handful of games this spring because he spent a majority of his time with the big league team. In his brief time around him, Mitchell has seen enough from his projected number three hitter, both on and off of the field, to label Torres as a future big league player.

“He acts like a big leaguer normally, there is no panic ever in his at-bats,” said Mitchell. “I don’t care if he gets two strikes on him, he is always confident and that kind of stuff is hard to teach. He does a fantastic job and he is such a fun kid to have on the team.”

Mitchell added, “he is just refining some stuff , but he is a big leaguer in the making, for sure.”