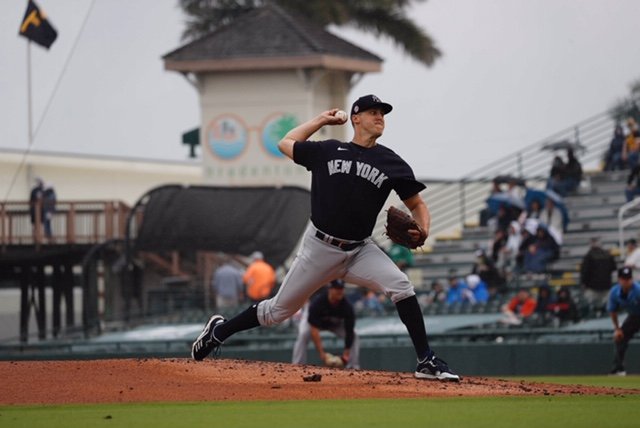 Bigger than anything that happened on the field during a rainy Saturday in Bradenton, Florida was the fact that Aaron Boone returned to the dugout. The Yankees’ manager underwent heart surgery earlier this week to insert a pacemaker, but he appeared on YES Network’s telecast on Friday and re-emerged at Steinbrenner Field to preside over a Gerrit Cole bullpen session a few hours before the game. He along with his players then traveled south to lose a weather-delayed, seven-inning contest 3-2 to Pittsburgh. Despite the loss, today was about Boone. It was wonderful to see him back with the team.

Jameson Taillon’s second appearance, and first start, of the Grapefruit League season came at his old stomping grounds as he faced his former Pirates teammates. His first outing lasted just seven pitches, but he had a somewhat longer leash this time around, firing 39 pitches over two innings. The results, however, were equally as good. Taillon cruised through a Pittsburgh lineup stacked pretty heavily with big-league regulars, allowing just two hits and a walk while striking out four. He hasn’t yet emptied the tank – unsurprisingly, given that he’s still under 50 pitches this spring – but his fastball registered at 92-93 MPH, a solid number given the date on the calendar.

Another strikeout on a high heater from Jameson Taillon. This was 93 mph.

Fans have to be encouraged by what they’ve seen from Taillon so far. Between his two strong appearances and Corey Kluber’s impressive maiden voyage last Wednesday, the early returns on the key winter acquisitions have been as good as advertised.

The Yankees’ offense didn’t do much on Saturday, but both of their runs came on homers. Veteran roster hopeful Jay Bruce didn’t waste any time, blitzing Pirates starter Cody Ponce on a 3-1 count and taking him deep to right-center in the first inning.

Jay Bruce continues to make a case for an Opening Day roster spot.

He crushes his first home run of the spring, a no-doubter to deep right-center field. #Yankees take a 1-0 lead. pic.twitter.com/kBqTPk00vf

Clint Frazier also went yard in the top of the sixth inning. The Yankees managed just two additional hits all afternoon, both singles off the bat of Thairo Estrada. Outfielder Mike Tauchman, who is theoretically competing against Bruce for a backup outfield opportunity, continued to scuffle with two strikeouts and no hits out of the leadoff spot. Gio Urshela, meanwhile, is still seeking his first hit of the spring after his late start.

Domingo Germán and Deivi Garcia are considered the favorites to win a spot in the starting rotation behind Gerrit Cole, Taillon, Kluber, and Jordan Montgomery. Each has had one appearance thus far: Germán was terrific on Friday against Detroit, while Garcia showed flashes of his brilliance with eight swing-and-miss offerings bookending two home runs in his two innings of work against the Phillies on Thursday. Given the Yankees may want to limit Garcia’s workload early in the year, Germán has a chance to win the role fairly easily if he continues to impress.

Jhoulys Chacín was brought in as veteran insurance in case neither proved up to snuff. But instead, it’s been Chacín who hasn’t looked worthy of a place on the roster. He struggled once again on Saturday, surrendering three hits and two runs in the third inning and was tagged with the loss (as well as a blown save to boot). The 33-year-old right-hander won’t break camp with the team if he doesn’t show better results.