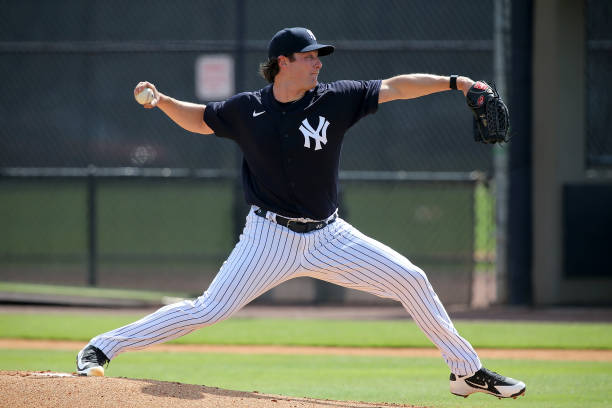 The New York Yankees will play a game that counts in front of fans in the Bronx exactly three weeks from today. While we’re all reminded this week of how the world permanently changed one year ago, there’s finally something of a light at the end of the tunnel. Down in Florida, things went awry this week with the news of Zack Britton’s elbow troubles, but most of the healthy regulars continue to impress in exhibition action. Gerrit Cole and the gang took a short drive across the Courtney Campbell Causeway to Clearwater and coolly handled the Phillies 6-1 on Thursday.

After a relatively tough first outing, especially by his standards, the Yankees’ ace roared back in start number two. Cole did give up a run on a single by Andrew McCutchen in his final inning of work, but otherwise, he was flat-out dominant. He mixed all four of his major offerings with ease, lighting up the radar gun with a 97-98-mph heater and keeping Philadelphia’s hitters off balance with secondary pitches all afternoon. Cole recorded a strikeout with every pitch he throws, and all five Ks were swinging. He fanned Rhys Hoskins with a good curveball and then retired Alec Bohm with a slider in the first; pulled the string on Didi Gregorius with a 90-mph changeup on a 0-2 count in the second; and then went up the ladder with fastballs to set down Andrew Knapp and Bryce Harper in the third.

All in a day’s work for the best pitcher in the American League. It’s a good thing his dad doesn’t have to sit on River Avenue listening to the game on the radio this year.

Gerrit Cole said that if the season were to begin with empty stands, his dad's plan was just to sit outside Yankee Stadium with a radio. Fortunately, the Cole family will be able to be in the stands for Opening Day.

Think this change from last year will mean a lot to players.

Hicks to the Sticks

Yankee fans experienced some shades of what might have been if DJ LeMahieu hadn’t inked a new contract in pinstripes: Aaron Hicks in the leadoff spot. Not that that’s a terrible reality. Hicks might be the most underrated contributor on the roster. He kicked off the afternoon by poking a wall-scraping home run to left field off Phillies ace Aaron Nola. Hicks doesn’t hit a lot of homers the other way, especially from the left side of the plate. It was great to see him flex some oppo power, and the blast set the tone for a fun afternoon. He also added an RBI double in the fifth.

Jonathan Loáisiga is facing down a critical year, as he’s failed to live up to his prospect hype and memorable big league debut back in 2018. He’s staking his claim to a bullpen spot this spring, especially as Luis Cessa has struggled. Against Philly, he was sharp once again, allowing no baserunners and notching a strikeout. Most notably, one particular sequence across the fifth and sixth innings saw Loáisiga deftly handle four consecutive comebackers.

Jonathan Loaisiga gets four straight grounders right back to himself! FOUR STRAIGHT! pic.twitter.com/PI229KFLV0

Oswald Peraza has certainly received a fair share of buzz this offseason. The 20-year-old shortstop phenom from Venezuela cracked the top 10 in many of the reputable prospect rankings around the sport, even reaching as high as number three in FanGraphs’ rankings. Peraza has clearly been impacted by the lost 2020 season, as many other top prospects have been. Even though he normally doesn’t face major-league-caliber opposition, entering many games as a late pinch-hitter, he hadn’t managed a hit through eight at-bats to begin the spring. On Thursday, Peraza finally came through with a sharp ground ball single to left in the eighth inning. Sometimes, all it takes is one hit to get going.

Journeyman infielder and Bronx native Andrew Velasquez, by contrast, needs no such boost. Velasquez, a product of Fordham Prep, got the start at third base in the nine-hole and made the most of his chance to shine. He went 3 for 4 with a RBI, two runs scored, and a stolen base, raising his Grapefruit League OPS to .990 in the process.

The Yankees will ring in the weekend in Lakeland against the Tigers. Jameson Taillon is set to take the hill for his third appearance and second start of the spring opposite veteran Julio Teheran.