Gregorius and Hicks PitCCh In at Bronx Public School 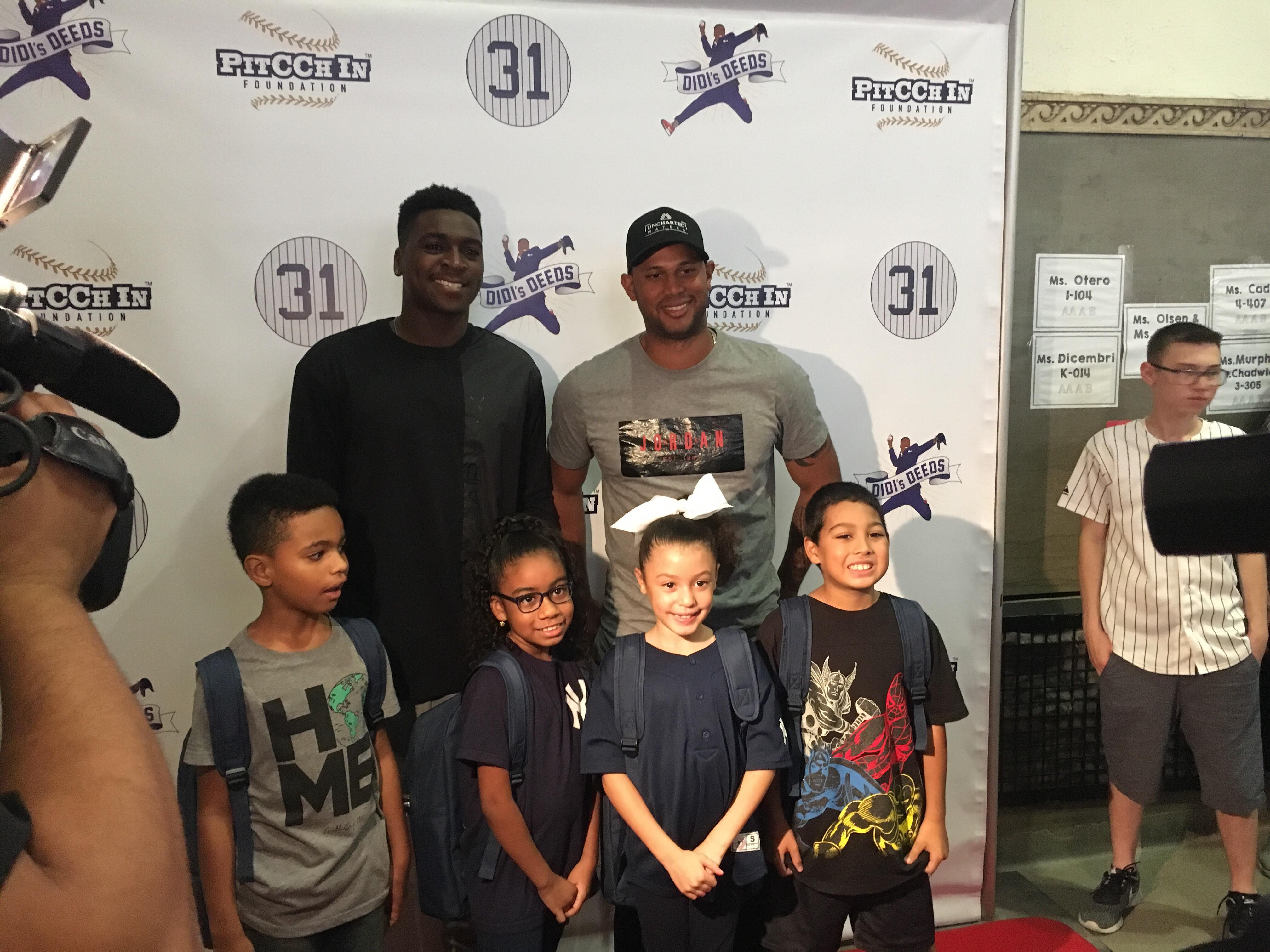 BRONX– What started off as a problem for one turned into a solution for thousands.

Every new school year, Margie Sabathia-Lanier would fret over the decision she had to make with regards to her son, CC Sabathia. New clothes? Or new school supplies?

She would ultimately choose the latter but that left CC wearing beat-up sneakers while everyone else flashed their brand new shoes. Sure that may not seem like a big problem, but that’s just one of the many financial issues that a lot of people not as well known as CC has to deal with every year.

So in 2009, CC, his mother, and his wife Amber decided to take advantage of his platform and take matters into their own hands and start the PitCCh In foundation.

The PitCCh In foundation runs a series of multiple programs including All-Star baseball clinics with current and former MLB players, baseball field renovations, and of course, the backpack giveaway.

The backpack giveaway was an idea created by Margie, and she serves as the Foundation representative to present backpacks filled with school supplies to first and second graders in the Vallejo City Unified School District, CC’s hometown. CC and Amber stay in the Bronx and distribute the backpacks to elementary schools and nonprofits. 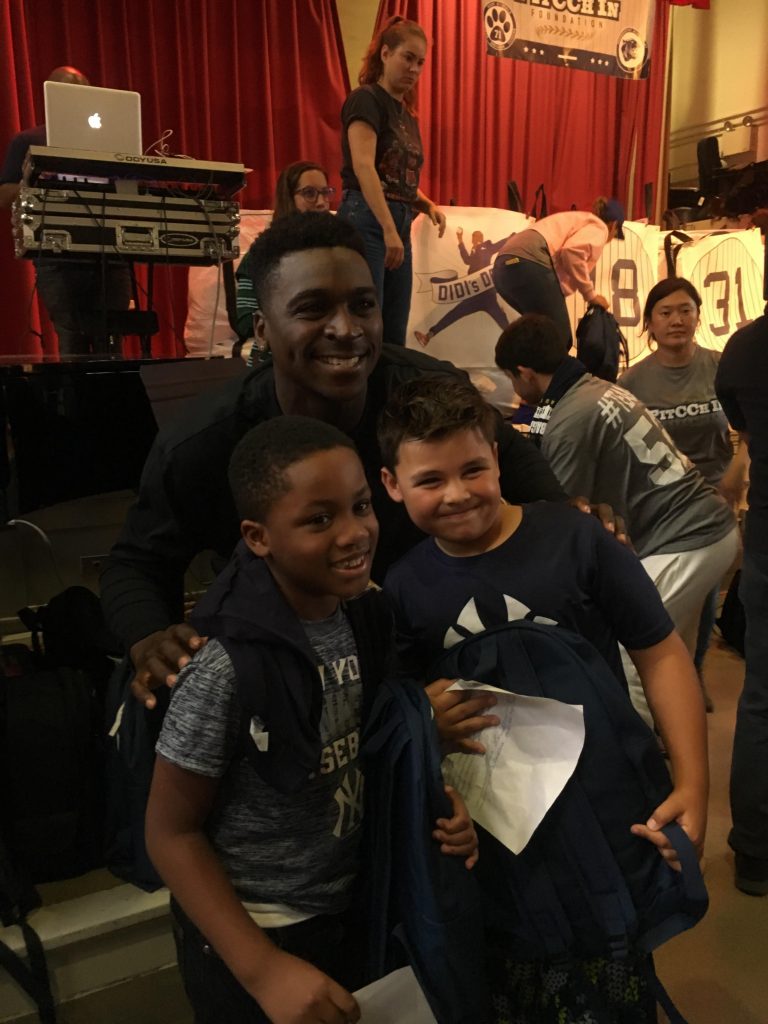 Combine the two occasions and the PitCCh In Foundation has given away over 45,000 backpacks to kids in need.

“I didn’t know that number until before this year, and I got all kind of tingles,” Amber Sabathia said. “It’s amazing because I feel like every one of these backpacks touches a child’s life.”

On September 14, the PitCCh In Foundation held another backpack giveaway in the Bronx, this time at PS 71.

The backpack is filled with school supplies, hand sanitizers, as well as other items needed for school.

Usually, CC is in attendance for the giveaway but was given “Daddy duties” by Amber today.

“We just did the one in California at Vallejo high, and we gave out 1,500 backpacks, so I gave him today off,” Amber said. “He had to take the kids to school today, so I could be here to do this.” 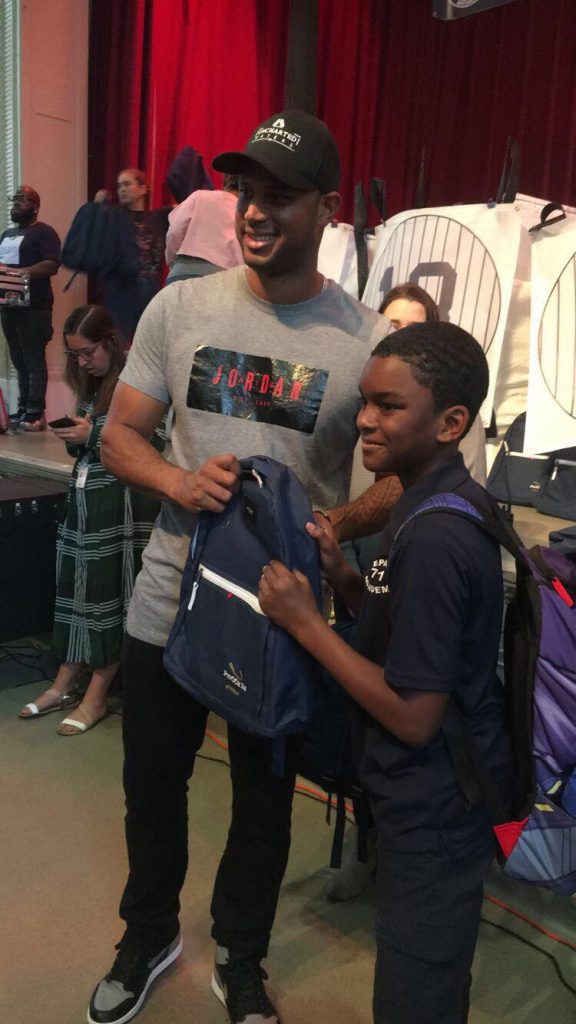 Although CC was not in attendance, filling in for the Yankees starting pitcher was Shortstop Didi Gregorius and Center Fielder Aaron Hicks.

“This year we realized that CC may be possibly retiring soon but the foundation will not,” Amber said. “So we started at the beginning of the year looking for different ambassadors that we wanted to bring in to be apart of the foundation that we knew would want to give back just as much as CC does on and off the field and the first two names he said was Aaron and Didi.”

Hicks believes the giveaway means so much more than just giving away backpacks with supplies in them.

“It’s awesome, especially when you’re here, and you get to see how excited the kids are during the whole event,” Hicks said. “It’s always good to give back to a school, so it’s cool to help out with that  and give utensils to change the world in the future because they’re our future.”

Hicks doesn’t have a foundation of any kind, so when CC approached him for this event, Hicks couldn’t pass it up. 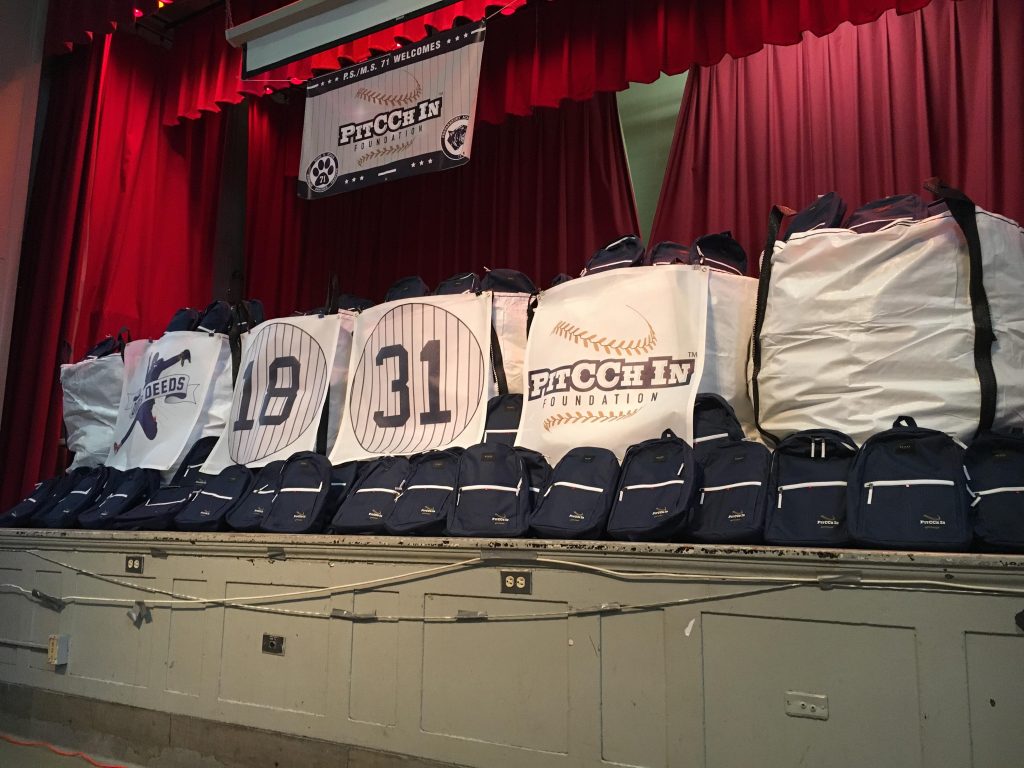 “He knows Aaron wants to give back too, and sometimes the players want to give back but don’t have the platform to do it,” Amber said. “So CC said he knew two good guys that want to do good.”

Gregorius, on the other hand, is no stranger to giving back to the New York people as he has his #DIDIsDEEDs initiative where he goes around New York and does good deeds for others. Examples include free subway swipes and handing out umbrellas on a rainy day.

“It’s something really good to do for the kids,” Gregorius said. “That’s something you get a lot of chances to do, but CC has an excellent foundation, so I just thought of being apart of it, but it’s always a good time to give back to the kids.”

While this is his fifth event with the PitCCh In Foundation, this is the first time Gregorius has participated in the backpack giveaway.

“The foundation has been doing awesome stuff with handing out backpacks with school supplies to kids,” Gregorius said. “After the long road trip we’re back here, and it’s awesome giving back to the community.”

The Yankees return from a nine-game road trip holding just a 1.5 game lead over the Oakland Athletics for the top Wild Card spot as well as home-field advantage in the one-game playoff.

To close out the season, the Yankees face all division opponents, opening a 3-game homestead against Toronto on September 14, then they get Boston at home for three starting September 18th, then they close out their home schedule against Baltimore. After that, they’re on the road for four in Tampa, and then three in Boston.

The Yankees have had issues beating teams such as Tampa, Boston, and Baltimore this season as their record against division opponents is just 34-26.

As they enter the final weeks of the regular season, and a playoff spot all but guaranteed, the primary objective is to come into the postseason hot and rolling.

“Just trying to finish the season strong,” Hicks said. “For our whole team, for myself, finish strong and get ready for the postseason.”

“I’m not making any adjustments,” Gregorius said. “Everything’s been the same, but we got to keep winning and keep going in the right direction.”

With hundreds of students packing into the auditorium at PS 71, the crowd of elementary school children went nuts when Hicks and Gregorius came out to greet the crowd. To many, it was a surprise and a day that they’d never forget. A lot of these kids’ heroes are professional athletes so for them to see their heroes up close and interact with them in the living flesh is something both Hicks and Gregorius take a lot of pride.

“It’s really important,” Gregorius said. “All we do is baseball, that’s what people see but they don’t see what we do besides baseball so something like this is the best thing we can do to show appreciation, to see the kids dancing and having fun, as soon as we walked in, the atmosphere here was really awesome.”

“They’re our future,” Hicks said. “They’re the ones that are going to change things, and I think it’s important that we take care of them.“