Kyle Higashioka was added to the Yankees 40-man roster on Friday.

The Yankees announced on Friday afternoon that prospects Kyle Higashioka and Domingo German have been added to the organizations 40-man roster. Additionally, the club announced that Dustin Ackley, Nathan Eovaldi, Chad Green, Branden Pinder and Nick Rumbelow have been reinstated from the 60-day disabled list. 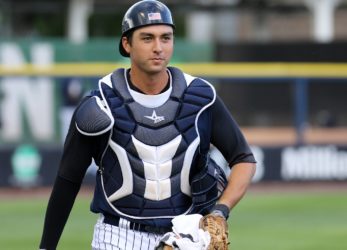 Kyle Higashioka was added to the Yankees 40-man roster on Friday. (Photo by Martin Griff)

Higashioka, a 26-year old catcher, is coming off a breakout 2016 campaign that saw him hit .276 with a career-high 21 homers and 81 RBI between Trenton and Scranton. The Yankees love what they have seen in his two-way development and believe that Higashioka is fully recovered from Tommy John surgery that essentially forced him out of action for the 2013-2014 seasons. It is easy to lose him in the shuffle with Gary Sanchez, Brian McCann and Austin Romine ahead of him, but the Yankees believe that Higashioka is a major league caliber backstop who can help them next season. You can never have too much depth at a premium position, right?

German is a 24-year old right handed pitcher from the Dominican Republic; he was signed as an international free agent by the Miami Marlins in 2009. The Yankees acquired German along with Eovaldi in an offseason deal that sent David Phelps and Martin Prado to Miami nearly two years ago. Shortly after the trade, German underwent Tommy John surgery and missed all of the 2015 season. At this time last year, the Yankees non-tendered him a contract before agreeing with him on a minor league contract one week later. In his first healthy season in the system, German went 1-3 with a 3.08 ERA with 38 strikeouts in 49.2 innings between Low-A Charleston and High-A Tampa; opponents hit just .225 against him.