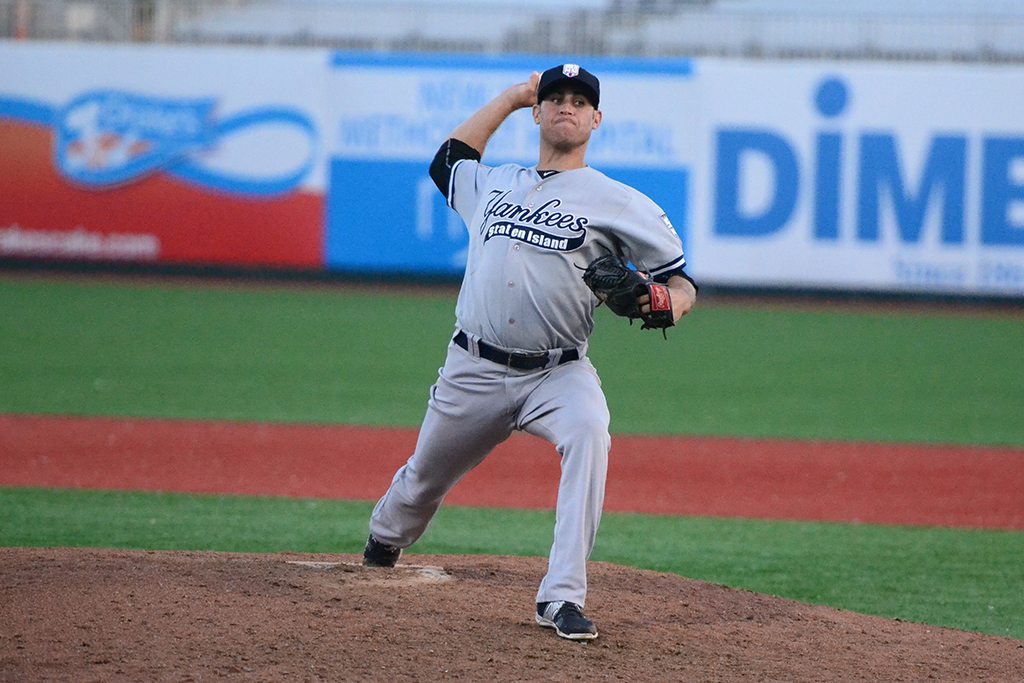 CHARLESTON, SC– The New York Yankees have announced that RHP Travis Hissong has been promoted to High-A Tampa as RHP Hobie Harris join the RiverDogs staff after receiving the call up from extended spring training.

Hissong was dominant in his six appearances for Charleston, compiling a 0.54 ERA with the RiverDogs after starting the year on his first full season Single-A assignment. The Bellville, OH native struck out 23 batters in 16.2 innings of work while walking just three. Hissong’s most impressive performance came on the road in Augusta on April 16 when the righty recorded 11 outs all via the strikeout in a tie ballgame in extra innings. Hissong allowed three hits and a walk in 3.2 scoreless innings of relief from the 10th into the 13th inning, doing enough to keep the RiverDogs in the ballgame, and eventually go on to win 5-3 in 14 innings over the GreenJackets.

Hissong is currently in his third season of pro ball after signing with the Yankees as a non-drafted free agent out of Kent State University in 2014. In his minor league career, Hissong touts a 2-2 record with a 2.20 ERA in 34 games with 76 strikeouts in 61.1 innings of work.

Harris returns to Charleston after making two appearances with the RiverDogs to end his first season of pro ball in 2015. Drafted in the 31st round by the Yankees out of the University of Pittsburgh, Harris went 2-1 with a 4.24 ERA with three saves while striking out 25 batters and walking 13 in 23.1 innings split between the Gulf Coast League (rookie ball), Charleston, and Tampa. The native of McKinney, TX spent most of the season in the GCL with two brief one game call ups to Tampa before making a pair of appearances with the RiverDogs on September 1 and 5 at the end of his rookie campaign. Harris allowed three runs on five hits while striking out four in his two appearances for Charleston last season.

With their retooled pitching staff, the RiverDogs will continue a four-game series with the reigning South Atlantic League Champions, the Hickory Crawdads, on Monday starting at 7:05pm at The Joe. Charleston will roll RHP Yefrey Ramirez (0-0, 0.90) out on the mound against Hickory’s LHP Brett Martin (1-1, 5.57). It’s a Monday Dog Day at the ballpark as fans can bring their pups out to the game while enjoying $1 beers and $1 hot dogs presented by Miller Lite. “Dogs with a Cause” also returns in association with Blackbaud, Inc. The RiverDogs and Blackbaud, the local software and services leader for the global philanthropic community, will share the spotlight with local nonprofit Tri-County Family Ministries.

Ticket information for the RiverDogs homestand can be secured by contacting the box office at (843) 577-DOGS (3647) or online at www.riverdogs.com. Those that can’t make it to the park can follow every pitch of the RiverDogs season on WTMA 1250 AM and streaming online at riverdogs.com.