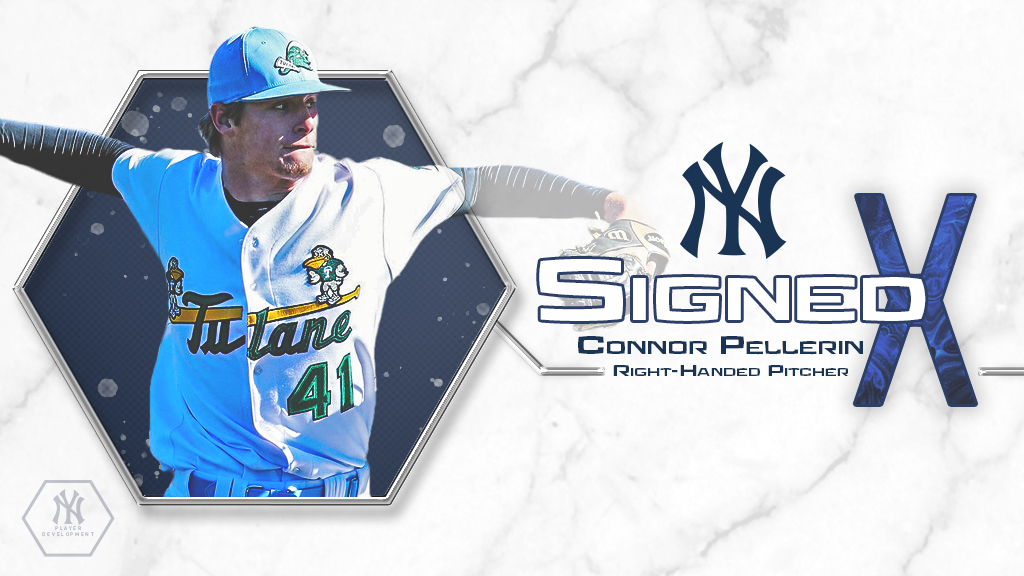 When the non-drafted free agent period opened this year, the Yankees jumped on the chance to sign right-handed pitcher Connor Pellerin out of Tulane University. Connor had a tremendous season in the Cape Cod League in 2019 where he did not allow a run in 14 1/3 innings but also struck out 27 batters.

With Tulane, he appeared in 49 games, mostly out of the bullpen over three seasons, and pitched to a 6.15 ERA with 84 strikeouts over 70 2/3 innings of work. We had the chance to talk with him about signing with the Yankees and learn more about him as pitcher.

Pinstriped Prospects: This year is a little bit different with the coronavirus cutting the college season short, and the drastic cut in the MLB Draft.  What was your mindset coming into June?

Connor Pellerin: So, I knew that I was kind of a bubble guy, I mean, I don’t know how it would have played if it was 10 or 15 rounds. I knew I was kind of on the brink of that five rounds. I talked with a couple of teams about maybe getting taken in the draft so I had some sort of hope for it, especially in those later rounds for like maybe sign for a little bit below slot and but I’d also I’ve talked with the Yankees before the draft kind of happened. They like set out a whole, a whole, presentation on me. and I was like, super impressed with it, but and then they kind of informed me that they only had three picks this year, which I completely understood where they were, where they were going with it. I was like, Okay, we’ll see how this draft plays out. For them to have that presentation before the draft and be kind of upfront with you. For them to like, be upfront with me about like, chances are we may not take you in this draft, but we would look for you. When it came to like the non-drafted free agent stuff. So, I kind of I knew kind of in the back of my head that that was an option for me, especially with them and I really liked the Yankees and everything that they had to say. So yeah, it was Yeah, I mean, I think that was pretty much the whole deal. The rest of this interview is exclusive to Pinstriped Prospects Dugout Monthly and Annual Members.  Monthly and Annual Dugout Members get complete access to scouting reports, interviews, and more all with limited advertisements on the website. Click here to sign up!