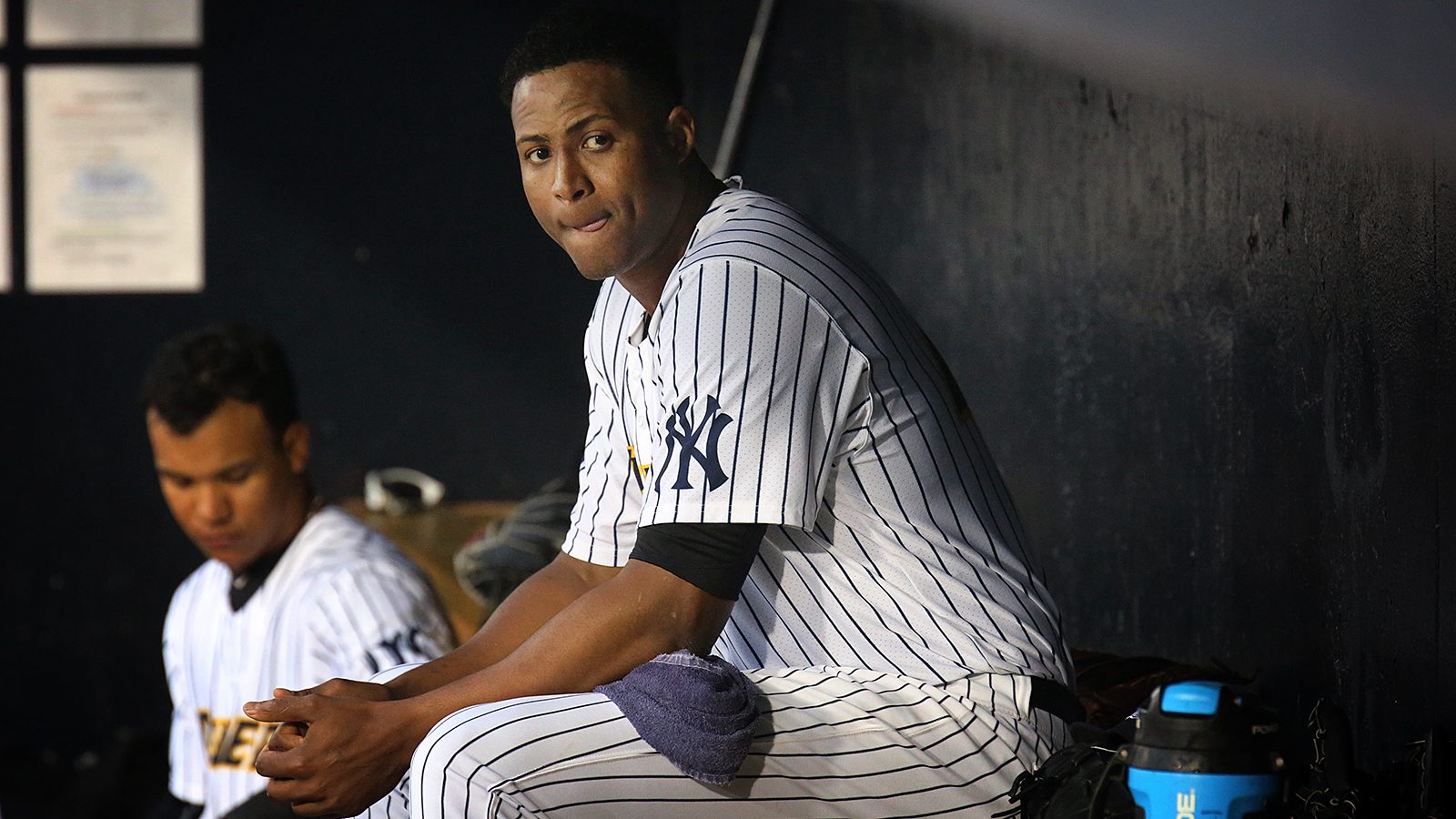 Thunder pitcher Domingo Acevedo has been solid in two starts for Trenton.(Martin Griff)

The New York Yankees have many special arms brewing in their farm system, some much more anticipated by the organization and fans than others. One of those players who has stayed in the back of everyone’s minds for the last couple of seasons is tall, powerful, Domingo Acevedo.

Ace’ is now just a short time away from the Bronx after dominating in Double-A Trenton last season, and making a highly anticipated Triple-A debut as well. After the trade of James Kaprielian, his name was pushed to the forefront along with Chance Adams as guys who could make their debut in 2018 and hop on the youth-train that is the New York Yankees now. It wasn’t all success for Acevedo this season however, as any top prospect his name was thrown around in multiple trade scenarios and the reality of it became clear when friend and teammate Yefry Ramirez (who was also having a very successful season) was traded to the Baltimore Orioles.

Acevedo has made it clear before how he wants to connect with the organization and their fans, and how he can get to superstar level. This season he made his biggest stride of his career thus far and it will lead into a much bigger hurdle to come his way this off-season into the 2018 campaign. Pinstriped Prospects caught up with Acevedo on 2017 success, his efforts to get to where he did, and where he is going to go because of it.

Coming into 2017, what did pitching coach Tim Norton work on with you to begin the season? How did you feel health wise?

“Nothing was wrong at the start of the season, I felt good, health-wise everything was good I just had plans that I would start somewhere else. I was just learning new things at the time so I had to grasp it and learn it in the process. We worked on the slider and throwing from more of an angle and with arms more shorter.”

What changed when you got to Trenton? Did they change anything you were working on or how you worked on it? Command and control was a big thing in 2016, do you feel like it was where you wanted it to be this season?

“No, no we worked on the same adjustments, I just felt more comfortable with what I was learning and what I had to do. My arm wasn’t as short and I had a better angle when I was throwing. I also had much better command as well, everything I was learning just started to gel in Double-A. Yes, I felt everything was perfect with the coordinators up there and what I learned down here (Tampa), and I just put it all together up there. They said it was going to be much better for my arm in the long-run, it was definitely a long process, but in the end it will work as they told me.”

During trade season, you see your teammates and friends traded and then start to hear your name being thrown around as well, what is that like for a player? How do you deal with it?

“It was hard because I had friends there, you know a lot of people and then you have to start thinking about things like that. It feels like losing family because we’ve both been in the organization for a long time, but it stays in your mind and you start to feel uncomfortable. It’s not in my control I just have to go about it and do what I have to do. Wherever I go I just have to work hard and do what I have been doing, To reach the bigs is the main things no matter where I go whether I’m here or not.”

What was it like when you got called to Triple-A and when you got there? After your first game, what was something you immediately realized you needed to work on?

“I loved it, I got called into the office after the game. All the coaches were there and everyone was happy for me. It was much more professional, everyone was more focused on what they needed to do. Even though it was only one level up, you still see such a big difference. I had to make better adjustments with my pitches, there was a lot of adrenaline flowing as well. I had to move my pitches more easily with compared to Double-A, but when I got back down it gave me more confidence moving forward.”

Do you feel like this season was a success?

“Yes I feel like I did everything I had to do, I thank God for everything, for the way I started I was able to recuperate so when I got to Double-A I could do a great job there. I have the hunger to keep moving up the ranks now.

What are your plans for the offseason now? Last season you worked with El Duque, anyone else this season? Explain how much this off-season means for you with how close you are to the big leagues.

“Keep working on my body like I did last year, be prepared and work out my muscles, I’ll be in Miami again to work out,  I’ll be starting earlier again this season like last. I’m always thinking of next year and being prepared. I know I have to work really hard because I know what is expected of me. I know my name there so I have to go even harder, more enthusiasm and everything to compete and maintain my level.

After posting a 4.57 ERA in Tampa after his first seven starts of the season. Acevedo went to Trenton where in 14 games he finished with a 2.38 ERA, 82 strikeouts in 79 1/3 innings pitched, a 1.03 WHIP, and a 5-1 record. He got two starts in Triple-A as well in which he threw 12 1/3 innings combined and gave up six runs and struck out eight. It’s very hard to imagine him not starting there next season and possibly even making his debut next season towards the end of the year. He has made great strides with his slider, but he does consider his changeup his second best pitch.

When asking him if he was ready for that next season he remained confident saying “I definitely think I can”. With knowing how this Fall will play a huge part in his 2018 season, it can be fully expected for him to go into next season healthier and stronger than he ever has been. Ace’ will not be attending the Arizona Fall League as the organization told him to get working early again as he did last year, and to stay ready as well in case of an emergency for the Yankees this postseason. Once the season ends though, he will go to Miami and work with many, including Francisco Liriano. It isn’t a far stretch at all expecting to see him in the Bronx next year, especially with the organization holding him in Tampa until the season ends and sending him straight to do his workouts after.