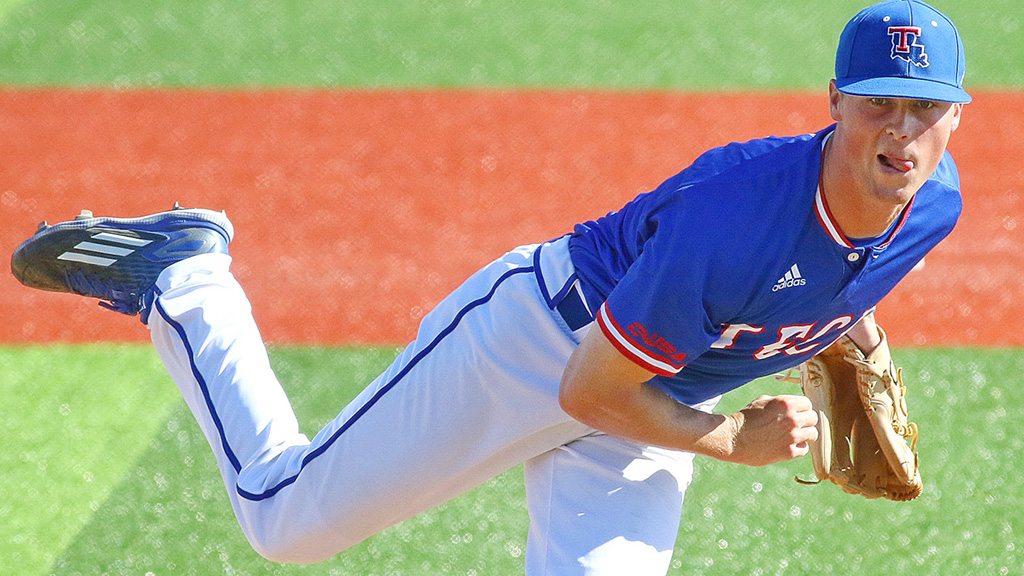 The New York Yankees selected Braden Bristo in the 23rd round of the 2016 Major League Baseball First-Year Player Draft. The right handed pitcher is currently a junior at Louisiana Tech University.

The Monroe, Louisiana native pitched in 18 games this season, making 15 starts. Bristo logged 80 innings and pitched to a 5-5 record with a 4.39 ERA.

Q: Congratulations on being selected by the New York Yankees in the Major League Baseball First-Year Player Draft. What an amazing accomplishment. How did you initially find out that the Yankees were taking you with their 23rd round selection?
“A: I was heading back from Rosemary beach. My fiancé, who I had asked to be my wife about a week ago, was in the passenger’s seat. She saw on Twitter that I had been drafted by the Yankees on the draft tracker. She freaked out and said “Braden, you just got drafted by the Yankees”. I almost wrecked the car and hopped in the passenger’s seat with her. Just about that time, their area scout called me and said this is so and so for the Yankees and we just took you in the 23rd round. I was very appreciative and told him that I had just seen it online. It was an awesome experience, honestly. He told be kind of how it developed and I was just super thankful and grateful. It was just an awesome day.”

Q: With such a historic and storied franchise selecting you in the draft, what is your reaction to the Yankees selecting you?
“A: It threw me off guard. I just thought to myself, the team that Babe Ruth played for just asked me to come play baseball for them. I still can’t really wrap my mind around that, but like I said earlier, it’s a crazy unbelievable experience that I am incredibly grateful for. The prestigious status that the Yankees have is something that I am very grateful to be a part of.”

Q: Prior to the draft, what where your communications with the New York Yankees Scouting Department?
“A: I never had any contact with the Yankees before this. It was kind of out of the blue.”

Q: Leading up to the draft, were the Yankees the organization that showed the most interest in you?
“A: No, like I said earlier, they had not made any contact with me. A couple of other teams had been talking to me. I was just kind of on pins and needles just wondering if I was going to get drafted. When the Yankees called, like I said, it just took me off guard but was super excited.”

Q: As you can imagine, Yankee fans are always extremely interested in who the organization selects in the draft. Can you tell the fans a little about yourself?
“A: First and foremost I am a Christian. That is what defines me, not the fact that I am a baseball player. That’s what I want people to know the most about me. After that, I grew up in a small town here in North Louisiana. I was a multi-sport athlete in high school and choose to play baseball in college at Louisiana Tech. I graduated in three years (this spring). This year I was hoping to get picked up by somebody, and thank goodness it was the Yankees. Now I am ready to get it going.”

Q: If you had to compare yourself to a current MLB player who would it be and why?
“A: I really like how Trevor Bauer works for the Indians. We train with the same type of people. I like the way he goes about his business. We are kind of the same size, so I would probably he would be the most accurate. ”

Q: Who has been the most influential person (or people) in your baseball career thus far?
“A: My father. Honestly, he does not know much about baseball, he’s a football coach, but he has really helped me become a man first and an athlete second. He has really helped develop me as a strength and conditioning coach in the weight room. The rest of my family has been so supportive. My fiancé and her family, along with my friends. I did my best to surround myself with people that want to be the best at whatever they do. So, I would like to say it’s just a combination of all those people.”

Q: What can you attribute your success at Louisiana Tech this season to?
“A: Well, my numbers don’t really jump out at anybody. They are not great. As a team we had a phenomenal season. Two years ago we had 15 wins and this year we had 42. That was a huge turnaround as a team. I’m not sure how much I actually had helped with that. The main thing would be how our pitching coach (Christian Ostrander) has done a phenomenal job with all the pitchers. I feel like he really helped me a lot. Half way through the year, things really started to turn around for me. I started throwing a lot harder. I attribute a lot of that, of course, to God. My velocity just really jumped out of nowhere. I feel like Coach Os had a lot to do with that too. I am very grateful for him, and all the work and time he spent with me.”

Q: Last Question, before I let you go, can you please describe how your overall draft experience been?
“A: It’s been just about indescribable. I got engaged over this week and then three-four days later, whenever it was, I get a drafted by the Yankees. My life has taken a complete 180. It’s something that I am always going to remember and be grateful for. I am really just ecstatic to be picked up by a great team. I just want to do my very best to get to the show and help the Yankees win their 28th World Series championship.”

Braden, thank you so much for your time. Best of luck to you in the future. Hope that you enjoy the rest of this special day with your family, friends and fiancé.