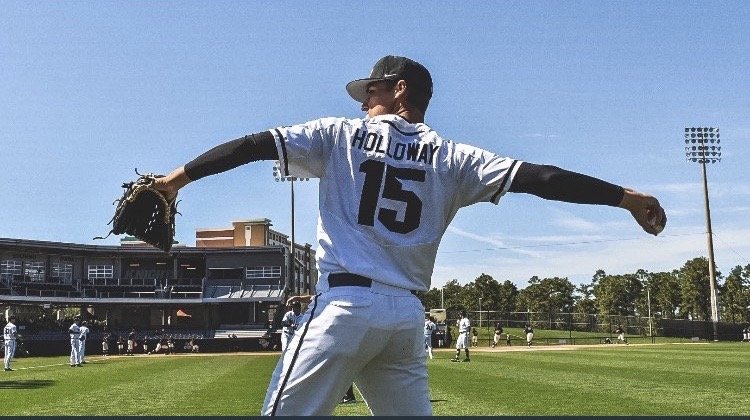 On the Sunday following the 2020 MLB draft when teams were able to begin drafting undrafted free agents, the New York Yankees made their second signing of the day 6-2, 200 lb right-handed pitcher and Venice, Florida native, Trevor Holloway, a Redshirt Junior from the University of Central Florida.

Holloway arrived at UCF in his Junior year of college, after playing his freshman and sophomore years at High Point and Chipola College, respectively. In 2020, prior to the season being shut down early due to COVID-19, Holloway had pitched 22.2 innings for the University of Central Florida, striking out 37 batters, compiling a small 1.19 ERA and surrendering just six walks over four starts for UCF.

In his junior year with UCF, he made six starts before suffering a season-ended injury against East Carolina University. In those six starts, Holloway had a 2.03 ERA with 29 strikeouts over 26.2 innings pitched.

Prior to attending UCF, Holloway played one season at Chipola College. He made 18 appearances, 13 of which were starts. He posted a 3.36 ERA over 75 innings pitched, with 83 strikeouts in 2018. He helped lead Chipola College to the 2018 NJCAA National Championship.

Holloway spent his freshman season of college at High Point, recording a 4.92 ERA over 13 starts, recording 45 strikeouts over 60 1/3 innings pitched.

Prior to entering college, Holloway was a three-year letter winner at Venice High School in Venice, FL, received a 2016 honorable game mention, was named All-American Second Team, a 2015 underclass high honorable mention, and led his team to the Florida 6A State Championships.

Holloway is a pitcher who thrives off of the use of analytics and being able to use technology to analyze and improve his pitches, which is one thing that attracted him about their Yankees, is there attention to detail and their use of pitching technologies to help improve pitches.

Pinstriped Prospects (Alexis Farinacci): How does it feel be a New York Yankee?

Trevor Holloway: It’s been absolutely awesome. It’s everything that you could want out of an organization. And it’s a lot of fun putting on the Yankee logo and everyone knows exactly who they are.

Pinstriped Prospects (Alexis Farinacci): Yeah, absolutely. That’s definitely a plus of being a Yankee, is people see the logo and know immediately that you’re representing the New York Yankees. The rest of this interview is exclusive to Pinstriped Prospects Dugout Monthly and Annual Members.  Monthly and Annual Dugout Members get complete access to scouting reports, interviews, and more all with limited advertisements on the website. Click here to sign up!