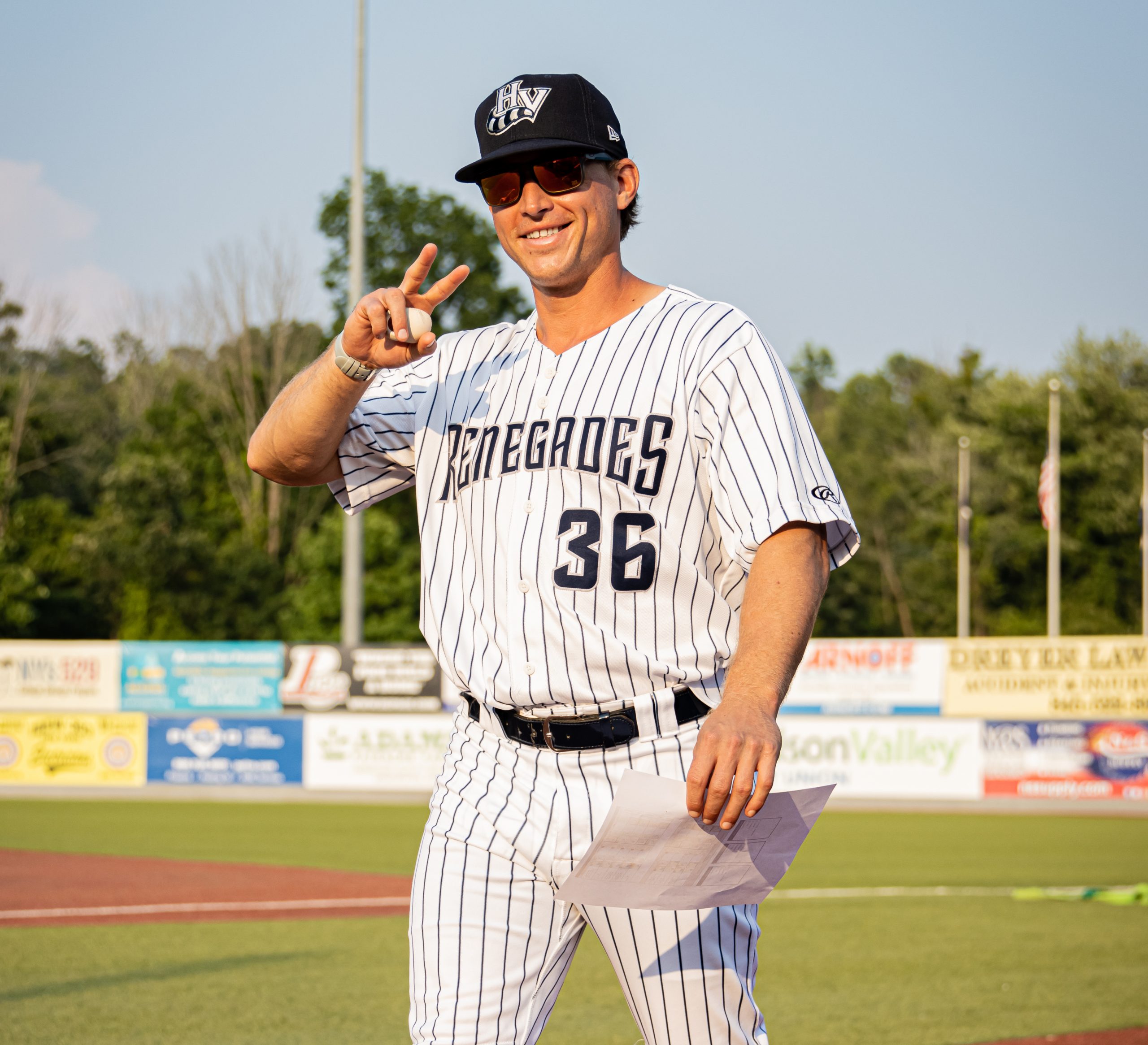 Aaron Bossi joined the High-A affiliate Hudson Valley Renegades as a defensive coach for the 2021 season, following four years as a coach at the Yankees Player Development Complex in Tampa. Bossi played one year for the Yankees in the Gulf Coast League in 2016 and has been a coach since 2017, primarily working with the catchers in the farm system. He was assigned to Hudson Valley to work with two of the Yankees top catching prospects, Anthony Seigler and Josh Breaux. I caught up with him to discuss his coaching career, how the development of Seigler and Breaux has gone, as well as his thoughts on Yankees 2019 first round pick Anthony Volpe.

Eli Fishman (Pinstriped Prospects): I’ll start with Anthony Volpe. It’s been a lot of fun to watch him the last couple of days offensively and defensively. How much potential do you feel he has?

Aaron Bossi: The kids got all the potential In the world. What really impresses me about him is his instincts in the field and on the bases. Obviously he’s got a lot of tools that are gonna make him an elite player as he progresses. But just the way his head is always in the game and looking for the next play is something that really separates him from a lot of guys.

EF: The maturity too, you would not think he’s 20 years old when you watch him play.

AB: He’s a very mature guy. Very hard worker, takes pride in his routines. Guys talk about having a good routine and to see him have them as a 20-year-old is really good. He is very meticulous in the way he prepares for the games, and it translates. The guy is always locked in and it’s great. He’s an unreal competitor.

EF: On the defensive side, we saw him play second base the other day, he’s mainly been a shortstop throughout his career. How do you see him developing, maybe away from the shortstop position?

AB: Just because I feel like the arm might be the most lacking, I would say he would excel as a second baseman or third baseman, probably a second baseman more so. But he’s got the bat that you want to keep at the top of your lineup every day. The bat and the speed. The guy plays a great shortstop for us, but as far as when he gets into his big league career, maybe see how the arm develops with that maturity. I mean, you do forget he’s only 20, he still can improve there and I’m sure he will, but I think he’s going to be a great infielder, no matter where you put him.

EF: All right, let’s talk about some offense. He’s 5’11”, not a big guy at all, and he’s second in the entire organization in home runs. How?

AB: Yeah, that’s awesome. The hitting department does a great job of getting these guys hitting the ball hard and in the air. He’s obviously taken to that and it shows how good his barrel awareness is. He barrels up the ball so much and he’s got such a good swing. He laces balls out of the park.

AB: Yeah, I think it’s being able to put your best swing on every pitch. It’s not, we’re at two strikes, so we’re giving up just so we can put a ball in play. It’s, we’re still picking a good pitch to hit and we’re going to put our swing on it. These hitters we have are really showing that no matter what the count is, if they get a good pitch to hit, they’re going to hit it hard and they’ll hit it far.

EF: With Volpe, it’s obviously hard to put a clock on any guy at this level, but how far out do you think he really is?

AB: That’s really hard to say. I just enjoy watching him play and I’m glad he’s here right now for us. He’s helping our team a lot from the offensive side and the defensive side. While he’s here, it’s great, but I don’t expect it to be long.

EF: All right. Let’s talk about the catchers, Josh Breaux and Anthony Siegler. How fun is it to see those guys develop? You never see a first round pick and a second round pick be catchers, and play together at every level throughout the organization. It feels like they develop off of each other.

AB: They do. Absolutely. They have a very good relationship together, they push each other, hold each other accountable and they have a little competition amongst themselves.

EF: I haven’t seen Siegler defensively yet. How would you describe his overall defensive profile?

AB: He is improving every day. He’s doing spectacular right now. He got off to a little slow start and we were able to identify some things that could make his moves behind the dish more efficient and we hammered them out. He’s able to translate them and put them to use in the games and it’s converted to a lot more strike calls. He’s made tremendous improvement, each start he’s getting better and better.

EF: I was really impressed by his swings last night too. Especially how far he’s come since I saw him in the GCL in 2018. How can you speak to his development offensively as well?

AB: He’s an unreal competitor. He has that innate ability to beat that guy on the mound and never give in. He’s aggressive early, but then when he gets to those two strike counts, he works himself back into a full count. He’s able to recognize pitches and lay off bad ones, to put himself in the best position to get a good hit for his team. From both sides of the dish, he takes aggressive hacks early and then if he falls behind he works his way back into a count where he’s in the advantage.

EF: Transitioning to Josh Breaux. Defensively, what would you like to see him improve on?

AB: Josh does an absolutely amazing job for us. Receiving and blocking for him is really good. People always talk about the one knee stance hindering the blocking, but it hasn’t slowed down Josh at all. He’s got that big body, he’s able to prevent runs for us back there. I would say the biggest thing that we were working on is just helping him get the ball out a little quicker and his throws. He has an elite arm, and now it’s just working on the quickness of getting it down there. He’s a very accurate thrower, the ball comes out with good life and now it’s just, how can we get it out quicker. 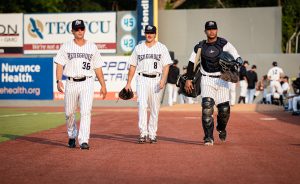 EF: Tell me about yourself and your progression through this organization. The GCL is a grind and now you’re here. It’s obviously a huge difference in terms of just the whole experience and especially that there’s 6,000 fans in the stadium opposed to the six scouts that are in attendance in Florida.

AB: No kidding. During the games, I’ll coach third base, and that’s been an awesome experience for me. I just kinda got thrown right into the fire with it, with really no experience except from what I’ve seen at games and my experience playing and watching, cause I spent my time at the complex as a rehab assistant. It’s been awesome. I think it was really special for me to be assigned to this team because I knew what catchers we were going to have and how important they are to the organization. So it’s definitely an important job that I don’t take for granted. And just getting to work with these catchers better every day has been really fun for me. It’s a great group of catchers. We’ve got Josh (Breaux), (Anthony) Seigler and Saul Torres, and all three are very different catchers. But it’s challenged me to see how versatile I am, meeting these guys’ different needs and it’s been great. I think I’ve met the challenge well, and I’m excited to be here and you know, it’s what I want to do forever. I want to be a coach. I knew since I was a kid playing the game that I’d be a great coach and I just hope I continue to get awesome opportunities like they presented me with this year. It’s been a lot of fun.

EF: What have you taken away from being able to coach these guys, obviously spending so much time with these guys grinding through the organization. How much has that rubbed off on you as a person?

AB: I think the grind hits people in different ways. The big thing for me is coaching the person and not so much the player like, hey, how, how are you feeling today? What do you feel like you need? Then I come to them with my ideas and we’ll sort of create a plan of attack for the week. I send out a weekly idea of what I have for them and then we meet and then we’ll train, and then you test what we train in the game. The idea that I use is to make the training more challenging than the game. So the game is easy and these guys respond to that. They love being challenged. Overall the grind, I mean, it’s a grind. You don’t want it to be monotonous, it can get monotonous. So that’s why with the training, you try to keep it fresh and fun and challenging. These guys are excited to come to work every day, instead of, oh crap, I got to receive from the machine again. But it’s been a lot of fun.