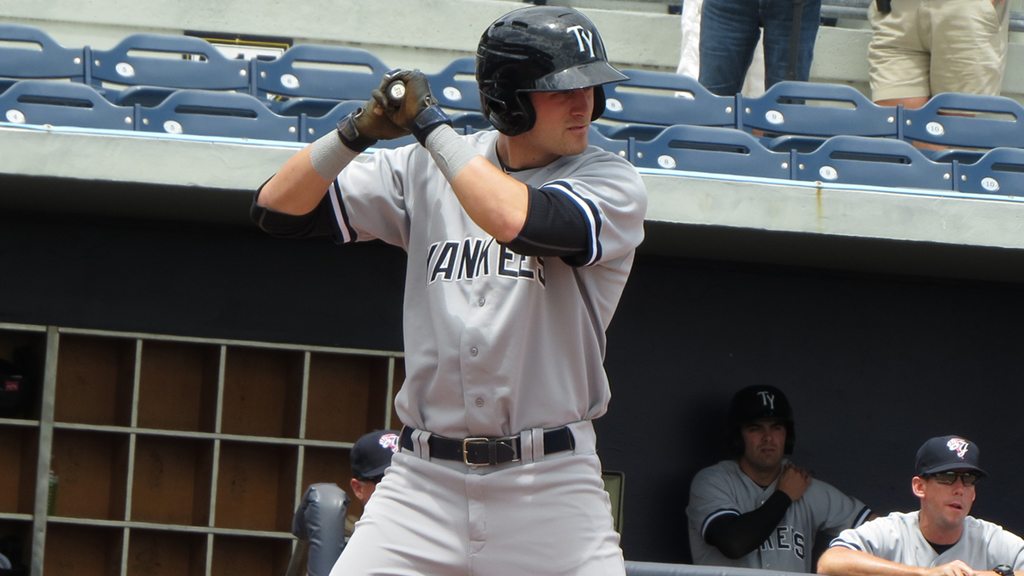 Zack Zehner is only one of two players who was a starter on Opening Day for the High-A Tampa Yankees and finished as a starter once the season was over. Zehner, an 18th-round-pick in 2015, played all of 2015 in Staten Island, and was moved straight to Tampa in 2016 this last season. Zehn’ was much of an unknown coming in, he has size, a good bat, and good speed once he gets going, but it needed to come to life at a level he hadn’t been near before. To say he started to put everything together was a bit of an understatement.

Zehner started off slow hitting-wise, from what he’d call a ‘learning-curve’ jumping from Staten Island to Tampa, but he’d then play a huge part in the Yankees success through the first half and second. Even without the hits, Zehner was getting on base despite his slower start. He’d finish the season sixth in the FSL in walks. Eventually Zehner started complimenting his plate discipline with solid contact hitting and became one of many stronger assets in the Yankees’ lineup.

Tell me about how your season came along, despite a slow start you were still successful, how did your game come together in the first half?

“I think it took a few months to work on my swing a little bit and just make the adjustments. Guys are throwing more strikes with their off-speed and just kind of getting a feel for my zone and how these guys are pitching me in the first half.”

When things are going well at the plate is there anything you feel like you shouldn’t change?

“I think when things are going well you have the simplest of approaches and your eyes, bat, and everything is working together in unison. If I’m going well I try to stay middle or opposite field, I don’t try to think very much I try to stick to the pitches that I feel I can control really well. If i can stay in that rhythm and that approach it ends up doing pretty well for me.”

I noted how Zehner was staying on base even when he didn’t hit and he talked on that aspect of his game as well.

“Even when I’m not hitting, getting on base a bunch, if I’m not feeling well at the plate, I’m trying to be a tough out, I’m trying to work and see as many pitches as I can to help me if I’m not in my rhythm.”

When thinking about your rookie season to last season, what do you think you’ve improved on the most?

“I think knowing myself, understanding my strengths and weaknesses, you obviously have to work on your weaknesses, but when it comes to game time you have to stick to what you’re good at. I think not trying to do as much this year and sticking at what I’m good at really helped me to be consistent where as in my first year I was trying to make a million adjustments in-game and you’re not gonna be successful trying to do that.”

Moving to the playoffs, how did you feel going in?

“Going into it that was our goal from day one, Os’ (Pat Osborn) comes in and says ‘hey were getting to the playoffs’. The team we had was completely different from the team we ended with but I think that goal stuck around in the clubhouse and that’s all we were focused on was getting to the championship. I was with Os’ in Staten Island the year before and we made it to the championship but we didn’t win, we lost to the Pirates actually the first time and this time so I knew Os’ really wanted to get there and everyone else wanted to get there and so that was the goal the whole year.”

You slowed down the last couple of weeks, what did you think you were struggling with at the plate? Was it fatigue?

“I think my timing was definitely off like you said the last two weeks of the season I definitely slumped a bit. It was definitely a timing thing for sure. I was consistent the whole year with my workout, you know you’re beat up at the end of the year, but so is everyone else. It’s not an excuse to be tired it’s the playoffs you got to be ready to roll and it’s baseball, you get in a slump sometimes and it’s unfortunate that it happened the last two weeks of the season. You want to end on a high note but it is what it is.”

Even if you didn’t play as much as you wanted, what did the playoffs teach you at this level? Was anything different?

“The thing I took away from it is it’s still the same game, it’s just another game. My first year I think I got pretty hyped up for the playoffs and you kind of try to leave your approach, everyone’s trying to do something to make something big happen trying to hit that go-ahead home run and you just have to stay within yourself and treat it like another game.”

Take me through the days after the series, what did you do when you got home to relax? When did you start off-season workouts? Any change from last season?

“I came home to San Diego, I took a trip pretty quick after I got back to see my girlfriend, got to see the whole family, everyone who didn’t get the chance to come out and see me. Took a couple weeks off, you know you got to get away from it a little bit, and then get back to the grind pretty much. I took some time off this year, last year I don’t think I took a day off I went straight into my hitting and my running. I didn’t play a whole season yet so I didn’t know what to expect, so i took a couple weeks off from lifting. But A typical day I get a lift in, I just started my hitting last week, try to get my speed up and do some sprints in at the end of the day. It pretty low-key right now, pretty much just hitting the weights and getting back in shape for next season.”

Heading into next season what’s something you want to work on?

“I think defense is big, I think its an easy way to separate yourself from others it something you can work on everyday. You have 100% control in your defense. Speed is always a focus, trying to become faster, I’d like to be better on the bases, you know I’m not going to steal a lot of bags but there’s other things you can do running the bases to help your team win, being better 1st to 3rd, 2nd to home, dirt ball reads, so getting better with the small things will help push my game forward.”

Zack Zehner will most likely start the season at High-A Tampa, but depending on who stays and goes from Trenton, he could very well be taking his trip up north sooner than you think. After his performance last season, expectation will be high for him. He’ll need to show a more consistent bat, and better speed as he mentioned. His plate discipline will be tested as it was in the second half, but for a lengthy body he sees pitches well. Coming from behind in the count will still be an issue for him as well, which means he’ll need to make those same adjustments in-game through the weeks. Overall Zehner is a solid guy to look forward to, his size and speed for his size makes him an interesting asset in the outfield for Tampa or Trenton.